Mr. Imai, every morning you visit the local market to purchase the produce for your daily menu at Monk. What did you find at the market today that inspired you?

Well, the market reflects the seasons very directly, and new vegetables show up every two or three days. It’s the beginning of our summer here, so today I got the first broad beans of the season. I’m just going to roast them in the wood fired oven! The broad beans have a thick skin that becomes super delicious when cooked this way. One of our essential dishes at Monk is just a dish of seven seasonal vegetables that I choose from the farmers market, roasted in the oven, sprinkled with salt… Then I put them on a big platter for the guests and they share among their group.

I think it’s the most delicious way to cook! And just presenting these vegetables in this simple way can resonate with everyone, man or child. Everyone can find this delicious.

Were you ever worried that it would be too simple?

“I always say to my staff: ego is not edible. No one wants to eat someone’s ego!”

Chef Daniel Humm told us that it took many years before he had the confidence to start taking away ingredients and just present something very minimal.

I totally agree! I know that not all chefs have that confidence, they have too much of a process and it loses some of the heart of the ingredients. Cooking minimal is the most difficult thing because we cannot cheat. Sometimes, I see restaurant dishes that just give me a sense of the chef’s ego… And I don’t like that. I always say to my staff and my friends: ego is not edible. No one wants to eat someone’s ego! (Laughs) I think cooking should be more minimal, and should show respect for the ingredients and nature.

Nature seems to be very important to your cooking philosophy.

Yeah, I’m really keeping this link with nature because I think it’s just essential for us as humans, especially when everything is going digital, eating is still connected to nature. And we can’t cut that link: vegetables come from the earth, meat and seafood come from nature… Cooking is just a way for us to praise nature, to have faith in nature.

Has nature always been an important part of your life?

Yes, I come from the countryside in Ibaraki prefecture. I can remember as a child, walking through the forests and in the fields by myself, I loved to make fires in the garden… And now I feel like what I’m doing is not all that different, cooking with the wood fired oven. My love of nature has always been connected with my love of cooking. I think many chefs have images or recipes in mind and then they go out and get those ingredients — but I prefer to do something different. The selection of vegetables available at the market is different each day, so it feels like I’m not the one creating the menu, it’s what the farmers get that day, it’s the environment, the climate, and nature deciding the menu. 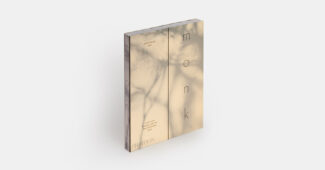 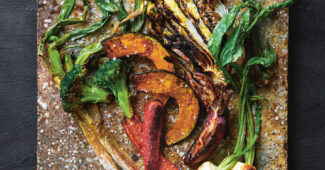 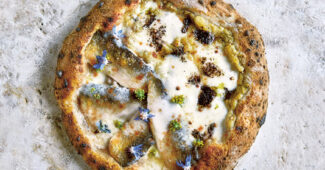 Apparently at the market, you meet with two older chefs who have helped show you the ropes around the market, and also deeply inspired your work.

That’s right, Hisao Nakahigashi and Stephan Pantel have been going to the market for a very long time — Nakahigashi has been going for over 20 years. He’s a legendary chef in Japan and the one I admire most in the world. He mainly sells vegetables as well, and his philosophies are very close to nature… His dishes are very poetic. I became a big fan of his after I read his book. I would see him at the market, and then one day maybe eight or nine years ago, I had an opportunity to talk to him and ask lots of questions. Whenever I see his car there, I go over. He jokes that I’m like a stalker! (Laughs) Sometimes we talk about not only vegetables but about more philosophical things, how to stay with nature, how to be as a chef… It’s amazing that the chef I respect the most is so close by. It’s a huge motivation for me.

When did you first start cooking professionally?

Actually I became interested in cooking quite late in my life, I was maybe 23 years old working as a hotel service man in Nagano in the mountainside of Japan. One day I visited a pizza restaurant called Enboca and the pizza was just really delicious. It was an interesting experience… I was walking in the forest a week later and in the moment that the wind blew, the flavors of the Enboca pizza really hit me as if it was playing a recording. I was really surprised and sort of moved by this memory and the emotion that came with it. That one experience made me decide to be a chef. I can recall that moment so clearly because I wanted to make a dish like that that can connect so deeply with someone and really blow their mind.

You never went to culinary school?

Never. I started my career by going back to Enboca and getting a job there, I never went to school or anything… Even Enboca is not the most professional restaurant but the chef, he was like an architect — but he was self taught, and so was I. But I think it’s nice to start like that, so freely.

I have to admit that pizza, which you also offer at Monk, is not something I would typically associate with Japanese cuisine — but apparently it’s been popular there since the 1970s.

Yes, since the seventies some pizza restaurants have opened in Japan, and even when I was growing up, Western cooking was already popular here. Then in the nineties, the Napoli style pizza restaurant with wood fire ovens started to appear in Tokyo. Lots of chefs went to work in Italy to bring back real Italian cuisine directly to Japan. Honestly I cannot say I was ever really into Italian cuisine but when I was starting out, pizza and Italian food was so popular that for myself and many other people from my generation, it’s a real classic. So it felt natural to offer it on the menu… I think it’s almost more similar to sushi somehow.

“There isn’t much to break down in terms of rules because I have never felt bound to them in any way.”

Well, it’s simple, it’s only a combination of a few ingredients with rice, or dough, as the base. I think it also requires that same kind of craftsmanship. My omakase course menu at Monk is very inspired by kaiseki cuisine: a bite of simple pizza crust, then a soup, then finish with pizza again.

Were you ever concerned about how a non-traditional kaiseki menu would be received in a place like Kyoto, which is more traditional than somewhere like Tokyo?

Since I started, I was always doing what I wanted. I have not even thought about that. People in Kyoto, they are traditional, you’re right, but they also like innovative things.

I guess once you know the rules, then you can break them.

The funny thing is that I’ve always been an outsider in the restaurant scene because I don’t have any formal training. There isn’t much to break down in terms of rules because I have never felt bound to them in any way… I just strive to be true to the essence of my ingredients, and my wish for the future is just to be even more free.