Yoann, what was your biggest mistake when you started your musical project Woodkid?

There is often a big difference between commercial and personal success.

I’m extremely lucky because I don’t think I ever sold myself to the devil with the project. Of course I’m not completely satisfied. I’ve already evolved since the album and I think there are a lot of things that are really dumb in it, that are too over the top, that are imperfect. Then again it was just a step in the process of learning and creating. I always find it funny when people take what you do as a final object. But it’s not, it’s just a step in the process. Of course it isn’t perfect. I mean, I’m only 30, which is pretty young for an artist to develop their artistic statement and their thoughts on the world.

Where are you currently in that process?

I can’t make a life choice between music, film, directing, directing a ballet, being a cinematographer, a singer, a dancer, a comedian, or whatever it is, but this one choice I can make is that I want to be an artist. I still don’t know what I’m doing and there are a lot of things that I’m experimenting with, but at the end of the day I want people to tell that I was an artist.

I think things are shifting a lot now and working between fields like that is becoming more common.

I think it’s a very good thing, but I come from a culture in France where it’s not good to do that. People don’t like that. They don’t like people who are in between. I always said the best place to be is in between – between two countries, two worlds, two cultures – because then you can take from one and put it in the other and vice-versa. I think all the art fields that I’m working in are pretty mature. Whatever you do, it’s pretty much going to be something that sounds or looks like something that’s already been done. But I think the frontiers haven’t been explored yet. 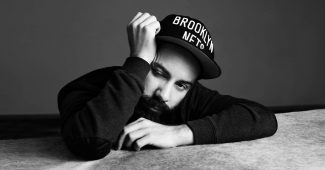 If you think you’re not the best director or the best musician, is combining the two your only shot to do something great?

I couldn’t come into the music world and just take my guitar and make folk songs. If I did that there would be millions of guys with a guitar that play much better than me, sing much better than me, have much better songs and better voices. So when I came into the music world, I tried to bring the aesthetic and the experience I had as a music video director, the intuitions that I had about technology and how I was using it. I like to explore through technology and the tools I have.

What kinds of things are you exploring?

One of the big things I have been exploring through all my work as a director and as a musician is if there is any hope and emotion in the future and in the technology. In my live show I was very interested in projecting completely digital images that would generate real emotion. Because that’s what we’re all facing right now. We’re facing TVs that go 4K, 3D, frame rates are increasing. With sound we went from stereo, to THX, to Dolby surround, to whatever come afterwards.

And you want to show that there is emotion to be found in these sterile, digital elements?

I really do believe there is. Because I was born with a computer and I think it’s extraordinary what we can do with it. This is what Kubrick was saying in 2001. Technology is just a tool, it just reflects what you are. It’s not an entity in itself. If it hurts you, it’s just because it’s a mirror. I think you can make beautiful things with it and that’s what I’ve always tried to do in my work as a musician and a director. I want to give a lot to people. I want to take people away from reality for a moment. I love when I go to a show and I just forget everything about my life for like two hours, because it was so good, so powerful, so generous in what it was giving. I like the idea of being generous as a musician. When people pay for a ticket to come see you, you’ve got to give them something.

“I don’t owe anybody a sequel to Woodkid. If I do it, it’s just because I want to do it. That will be the only reason.”

The relationship between an artist and the audience needs to be a give and take and not just a one-sided thing.

Yeah. As a musician, when you do an album, when you create, you don’t owe anything to anyone. But when people start paying for a show, when they pay in advance to come see you, then you’ve got to give them a fucking show. And you cannot give them a good show if you don’t have a good album, good visuals, good lights, good energy, a good attitude, and a good voice. So you’ve got to work for that at the end of the day.

You used to be behind the scenes, but now you are playing shows in front of thousands of people. Was that a difficult adjustment for you to get out on stage and perform as Woodkid?

I didn’t like it at the beginning, but I’m trying to perfect myself as an entertainer. What I love is that I’ve learned a lot about my body and my confidence by doing this. And I really love it. I think I really like performing. Though I wouldn’t spend my life doing it and I always keep a little distance that protects me from it, I was on the edge this year of being like, “Fuck it, this is what I’m going to do my whole life. I love it so much.” And then I was about to trigger that switch where I would give myself completely on stage and accept the idea that I had found what I wanted to do and I would give my whole life to this.

Because I know that it could stop. I could stop selling records, people could dislike me, and if I have embraced it 100 percent, made it a life statement, then I would lose everything. I don’t want to end up like one of these old rock singers who keep on touring all their life because they have nothing else. There is something extremely beautiful about live performance, but I don’t think it’s made for me. Now anything could stop at any moment and I’d still have something else. I have no stress in whatever I do. Even when I shoot a video for Drake or creative direct a project for Pharrell Williams, I have so many other things in my head – as a singer, my personal life, working on the ballet with JR at the New York City Ballet – it’s like I’m always giving myself a little escape door.

So as long as you have a plan B and a plan C, you can be much more relaxed when pursuing with plan A?

Totally. I think that pressure of wanting to absolutely succeed precisely on the one thing is very toxic. I do want to succeed in general, but I’ve been asking myself, “What is success really to you?” And I’ve been thinking a lot about it and I think that success to me is to manage to be free, but also to do things that I like. It seems very stupid, but at the end of the day if I completely like and am proud of what I do, then to me it’s success.

Yoann Lemoine directed all the music videos for his music project, Woodkid.

No matter what the critics say?

Whenever I had critics of what I was doing, the criticism only hurt when I knew that I wasn’t completely successful in that way and I knew that somehow they were right. That there was probably elements of my work that were not perfectly crafted, that were not straight to the point, that were not relevant. And I’m not there yet.

You always refer to Woodkid as a project. Does that mean when you take on the next project you will put Woodkid to the side and revisit it later when you feel like it’s time?

Maybe. What I know is that making an album takes a lot of time, going on tour takes a lot of time, and I cannot work on something else when doing them. I’ve given a lot of my time for music lately and I want to give back some of my time to directing. I just directed a music video and I also want to do a feature film. That’s one of my big dreams. I don’t know if I’ll be good at it, but at least I want to try. It doesn’t mean that I’m not going to make music, but I have no idea what’s next with Woodkid. I have ideas of where it could go, but whatever I do afterwards has to be different.

So no second album is in the works?

Nils Frahm: “Everything can be used for the music”

David Byrne: “We did okay”