Winy Maas and MVRDV's Crystal Houses, located on P.C. Hooftstraat 94-96 in Amsterdam, is a flagship store with a replica façade made entirely out of glass. Watch a video on the making of Crystal Houses here.
Emerging Masters
Rolex is proud to support The Talks’ new interview series about the cultural leaders of the future.

Mr. Maas, as an architect and urbanist, how do you strike a balance between form and function?

The interesting thing is that function is quite a wide word. A building can also function as a symbol of pride in an environment. With The Market Hall, a fresh food market I designed in Rotterdam in 2004, it’s more than only a supermarket — it became like an emblem for the city and that is also a function for it. You want to keep it, and more people from outside the city come to visit because of it. I love that the form somehow finds this function and results in a message or a wider perspective of its meaning. So this ping-pong game of function and form is essential. There are more functions than purely the programmatic.

With that kind of thinking, the mundane and the every day can really be brought to life.

Right, I think in every project you have to deal with day-to-day elements and somehow bring that into a wider perspective. You somehow hope that people are going to use it and are inspired to use that structure and that they start to love it. A building is supposed to be useful in your day-to-day life, but day-to-day life also means that you want that building to stay there, you know? It also becomes part of your day-to-day life.

“This ping-pong game of function and form is essential. There are more functions than purely the programmatic.”

In that sense, do you feel a lot of pressure in designing buildings?

Well, take for example, the Glass Farm that I built in my hometown, Schijndel. It’s a very small village so the townspeople didn’t know what to expect. My mum went into the center of this village during construction, and they were really questioning her, like, “What is your son doing?” My mum was really angry, she was saying to them, “Wait and see what happens in a couple of years!”

And now that the building is finished?

It’s funny, my mum is now walking with pride because buses of tourists are going to this small town just to see that building. (Laughs) We withstood this criticism, and she now has her moment of glory. So, you know, I think the most pressure comes when you’re designing a building in a place where you live or where you’re from because you’re witnessing and facing the evolutions and developments that surround your action, your creation.

Did nostalgia also play a role in that particular challenge?

Can nostalgia be productive, you mean? Sure. It is a motor. Of course, it’s also nice to make a building in the middle of China where I’m not there that much! (Laughs) But In this case, I think maybe because I lived in Schijndel for 18 years, I still have friends there, my family is there… It’s also a way to make the place better for those that you love.

Schijndel is not a very beautiful town?

It is one of the ugliest villages on the planet! 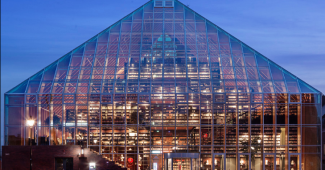 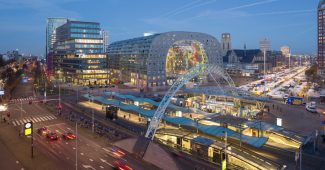 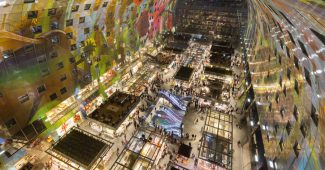 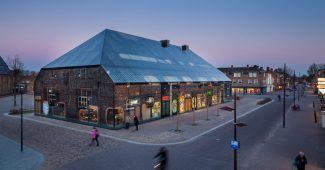 Is that why you left home at 18 and moved to the city?

(Laughs) Yes, exactly. I spoke with the mayor about this fact maybe 20 years later when I was working on the Glass Farm. There are some great artists that came from this specific village, from that generation — painters, media artists… We were wondering how that happened, but I think it’s just that, like me, they had such an objective, they were born in ugliness and that pushed them to make improvements. That’s very contradictory but somehow it’s true. When you are not pampered, you have to fight. So I’m happy that I could make something in that village.

And now you’re based in Rotterdam. How does the past come into play in a new city?

The memories of a site’s past always play a role in it, but you also construct a future on that site. In the case of my Spijkenisse Library in Rotterdam, for example, it fits in the urban envelope of that city, it’s made entirely of glass, it is a mountain filled with books. The use of glass there was a way to enlarge the space but also to combine it with intimacy and closeness. I find glass a fascinating material to work with. There are other good materials; smoke is another one or water could also work…

Is that what the future of cities looks like to you, completely transparent?

It is my wish to be as transparent as possible, to give wider perspectives while being in a dense environment. Opening up. The Spijkenisse Library was quite a social, democratic project in that way. It’s not a big collection of books but the goal was to get people into reading again, because that city has the lowest IQ in all of the Netherlands. We wanted to get them inspired.

“A building should be loved. That’s the only thing that you can hope for.”

It seems like the social benefits of a building are maybe more important to you than the economic ones?

That’s one of the major elements that an architect should deal with, contributing to that kind of social growth. Of course, there are economic benefits, but the social benefits mean that a building is interacted with. That’s a lovely part of our work. Architects cannot simply make a building, I mean, that’s stupid. I don’t trust that. You need to build up a relationship with a city and you need to spend time with it, talk with people… What I always love is the moment when I am able to criticize a city or its mayor.

You see the good parts of a city but more importantly, you see the parts that you want to innovate. That’s the aim. If you can manage that, then you’re beyond the point of dropping your building or your object and leaving it there — then you’re participating. That’s for me the most intriguing part of new cities. In that way, I feel very much at home in Hong Kong or in Japan where we do a lot of projects.

Do you feel a kind of loyalty to certain cities because of that?

You feel at home in certain cities because of that, yeah, that’s very true. When you love a building, you become loyal to it in general. You defend it. I like that. Loyalty has its limits that we are all aware about, you know, it can stop you from innovating. But I think if you love a building and you don’t want to have it demolished, you did a good job. A building should be loved. That’s the only thing that you can hope for.