William, what is your earliest memory of dance?

My first memories of dance had to do with Hollywood films in which Fred Astaire starred! But I think what made the biggest impression was Walt Disney’s Fantasia, an animated film where they had taken classical music and made very imaginative choreographies or interpretations that were abstract and narrative. Like the one with the crocodiles and the hippopotamus! (Laughs)

I expected you to name a classic ballet film like The Red Shoes...

No, I only saw that later. I didn’t see any concert or formal dance until I was much older… I think I was 18 years old when I actually saw a real ballet. Before that, I danced at clubs a lot. My goal was either to be on Broadway or to be a club dancer. (Laughs) I even worked as a stripper briefly when I was in college.

“I think if you have an inclination towards a danced life, the feedback you receive from motion is perhaps exacerbated, you know?”

As a club dancer, you have to choreograph yourself, in a sense you have to develop your material. I think if you have an inclination towards a danced life — not a dance career, but a danced life — the feedback you receive from motion is perhaps exacerbated, you know? As human beings, we're a little bit more inclined to feel an intensity when we’re involved in any kind of kinesis. I was fascinated by the challenge of ballet.

What is it exactly that fascinates you about that challenge?

It’s intellectual and it’s physical. In other words, you use your body to solve problems, and these problems are basically physics problems. You develop the skills to solve the challenges of centrifugal force and gravity and balance, plus fulfilling all these aesthetic criteria at the same time — it’s very, very complicated and I liked that. The problem in ballet is in general in the practice of ballet, where I feel there is a problem of loss of relevance.

Do you think that ballet is becoming an outdated art form?

For me, relevance means the ability to express through the work why it needs to be here now. There has to be an absolute necessity and it’s not always demonstrated that way. There are some extraordinary directors out there who are trying to instill the necessity to revitalize the practice of ballet and are really attempting to circumvent a historical drag — like Sharon Eyal, an Israeli choreographer whose structures are actually super-classically contrapuntal but with an utterly contemporary, even pop, sensibility.

Personally, I see a lot of waste in theater and in opera. I find it offensive given our situation today — politically, culturally, all that we are dealing with. You know, it’s one thing to make theater about some hot political topic but to spend an absurd amount of money for image is another matter… 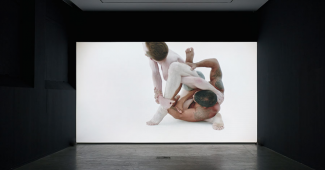 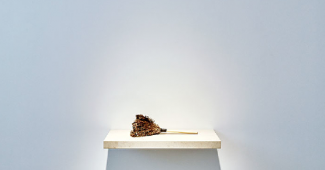 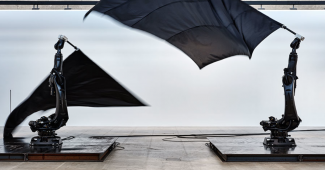 You question the necessity?

I just think that you can use your imagination to create better solutions that don’t support the economic disparity that they try to display. Otherwise you are valorizing a class distinction that is no longer really helpful. Choreographers should be capable of harnessing what is important — the aspects of craft, which locates it in the historical trajectory of classicism — while being able to recontextualize it to a degree that it has contemporary relevance.

Is this something you try to accomplish in your art installations?

Yes. For example, Choreographic Objects — which comprises installations, film works, and discrete interactive sculptures — has been exhibited in museums and other institutional spaces. It seems significant that Gagosian recently presented it at this time when the art world is embracing choreography in all its forms. No matter how diverse the scale and nature of these projects have been, they all strive to give the viewer an unadorned sense of their own physical self-image and to return the analysis of kinetic phenomena that was previously the exclusive purview of professionals to a platform that speaks clearly to the non-specialist.

So how is movement incorporated in something like Choreographic Objects?

Well, most of the art pieces serve as surrogates for real-life interactions with the human environment — running to catching a bus; avoiding a swinging door; not tipping a chair; not stubbing your toe, and so on. For example, the three shows at Gagosian Le Bourget each demonstrated a different principle, from pure observatory spectacle to focused direct interaction. Black Flags was my most ambitious installation to date, a 28-minute duet for two standard industrial robots. In total contrast to this huge spectacle was a small-scale interactive work called Towards the Diagnostic Gaze. Alignigung is the latest in a series of video works that I have created in collaboration with some of the world's greatest dancers. Essentially, what I often attempt to do is to isolate phenomena that are so fully integrated into our unconscious physical selves they are invisible to us.

Does art have to be disruptive in that way?

I think art can also be disruptive, but there is no imperative. Once you narrow it down and try to insist on some content, I don’t think that’s such a great moment for art. No one has any idea what really works, how it works, why it works and that’s the interesting thing about art. Everyone is trying to figure out exactly what, among many things, to communicate.

Did any your choreographies ever fail to communicate what you were looking to?

Oh, yeah! I’ve lived with that for a while. I’m one of a group of artists who had their shows stopped by audience dissatisfaction. (Laughs) When I first began in Frankfurt, at the end of the performance at the Opera House, there were only 60 people left in the audience: 30 of them were booing and 30 of them were cheering! The show was called Gänge and it started out full because it was by subscription. And then all hell broke loose!

I thought it was great that people felt so strongly about culture. I remember when I stepped out on stage to talk to the audience I was greeted with such an extraordinary wall of acoustic aggression. It was like nothing I’ve ever experienced in my life!

“My ballets were entirely new works and that was uncomfortable for the audience.”

What do you think it was that made them react so strongly?

Well, you have to remember the notion of Burger Bildung Erziehung. A ballet is considered a public service in Germany, it is paid with public money and, supposedly, it is there to reconfirm entrenched values — right? I think this works better in opera because the substance of opera never changes. If the audience members hated the staging, they could close their eyes and they still had the subject. However, my ballets were entirely new works and that was uncomfortable for the audience.

Even though the concept of Tanztheater was already well established in Germany through the work of choreographers like Kurt Jooss and Pina Bausch.

Theater is still categorized by that particular population as Unterhaltung or entertainment. Even the construction of the word implies something that is not on the same level as intellectual pursuit. Rarefied intellectual pursuit. The dramaturgs at Frankfurt Opera, where I worked in the 1980s, were all students of Theodor Adorno, and the message to me was that I was responsible for redefining the practice! Therefore, the dramaturgical team was very happy with the Gänge performance. Obviously the public was not of entirely the same mind as them!