Will Goldfarb's new book, Room for Dessert, is out now via Phaidon.
Emerging Masters
Rolex is proud to support The Talks’ new interview series about the cultural leaders of the future.

Mr. Goldfarb, do you listen to music in the kitchen?

No, I can’t stand noise in the kitchen. When I’m cooking, I need absolute silence, there’s no soundtrack, it’s the noise of the pans and the spoons. If I’m thinking or writing I need total, total monastery silence. But at Room4Dessert, so much of the feeling of it is a live interaction with people and music is really critical to that, whether that’s making guests feel a certain way or maintaining the energy of your staff, you know, if the rhythm is up then everybody’s up, right? Music is really integral to that.

In your cookbook you include songs as accompaniments for your different recipes and stories. Was that where the idea came from?

Well, I think the pop culture references and the inclusion of songs, I think the fun of the narrative, for me at least, is that it gives you some reference in place or time. It becomes more like a reference point for a moment, and I think that moments are really important.

Not everybody can imagine what it’s like in a restaurant kitchen even if you describe it really well — but a lot of people remember what it was like watching their first Wes Anderson movie, you know? So for me, that’s part of the charm. Not everyone shares a common experience, so I tried to throw things out there that they can relate to. It’s more to give people something to hold on to, something to connect with, and also to identify what is a meaningful moment on my side because they are specifically meaningful moments. The things that are constant are the things that you carry with you.

What kind of things have you carried with you over the course of your career as a pastry chef?

In a practical sense, I had a knife bag that I bought at Dehillerin in Paris that I had strapped to the outside of my bag for 10 years. But at the same time I had some DVDs like Pulp Fiction or Trainspotting that I used to learn French with when I was living in Paris, I had CDs in the back of my car for years. I had this a clock radio and the alarm was the Jackie Brown soundtrack — I can still hear it going off at 3:45 am, you know, I can still hear it ringing it my head and I can remember the feeling of waking up, how dark it was, as if it was this morning. I had all the Pet Sounds records on vinyl. I had this collection of vinyls that I inherited from my dad when he passed away that now we play in the restaurant on a record player that my daughter gave me. It’s very charming, you know? There’s something very charming about those moments of reflecting…

Does listening to music bring you to the same introspective place as when you’re cooking or doing prep work?

Oh, it has to be soothing otherwise it’s just so lonely. I mean you have to really enjoy it, but it is very meditative. The whole point of it is, and that’s the real irony of the discipline, right? You can either think of it is as converting man into machine, human into a robot… Or you can think of it as contemplative rewarding time where you’re alone in your work. And I find that very relaxing. I still do. 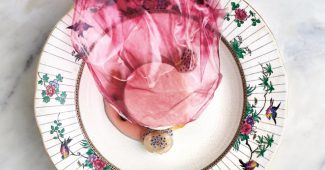 Is that feeling something that comes through in your desserts?

I don’t know. That’s difficult. I hope so but I guess that’s the challenge when you’re asking on an intellectual side about food when it’s really just supposed to be enjoyed. You’re just supposed to like it. If you don’t notice the ideas, it’s effective. That’s really the value of being thoughtful is that those subtle things come through in a way where they’re not pedantic: so the guest being happy means that it works. I mean, the number one thing is making people smile, making people happy.

That is a refreshingly simple way of looking at it.

You know, I think with food, it’s got to be delicious. It’s really nice if it’s pretty. And it’s a bonus if it’s interesting. If you’re cooking, you’re supposed to have the best stuff and you’re supposed to cook it the best way you know how and then you’re supposed to deliver it to someone as well as you can. I think that’s timeless. I take that for granted! That’s your mise-en-place, that’s just the getting ready part! The business end is delicious, pretty, interesting. And for me that’s really simple. Plus, I think there’s an opportunity with dessert to be contemplated because it is final. It’s the end!

How does that affect you as a desserts-only restaurant?

Well, mono concepts are always curious. The economics of dessert-only are challenging. Desserts are cheap. Steaks are expensive. Chairs cost the same amount. (Laughs) Desserts relatively command a low price but they demand an awful lot of work and elaboration to make because if I get a piece of meat, and I cut it up and I make a tartare, it’s pretty straight-forward and I can charge a lot for it. But a bag of flour, eggs, and sugar, and butter…

None of them on their own are edible.

Right, and it takes the work of one of more people to make it into something really delicious, at which point it still is a relatively inexpensive dish. It takes a lot of work to make pastry ingredients delicious. And that doesn’t mean that they command a premium price. The other thing is from a straightforward demand, right? Like, how many times did you say, “I want to go out for pizza!” versus how many times you said, “I’m really in the mood for dessert.”

Do you look at that as a challenge or an opportunity?

I like doing it, it’s what I’m good at, so it’s what I do! But I do think it’s both challenging and an opportunity. I mean, it’s always a double-edged sword because people want to be happy but they also have an expectation of what that means. With dessert, I think you have more flexibility in the ways you can make people happy… So in terms of being challenging, I think that has to take a different context; you can get away with being provocative at the beginning of the menu but I don’t think it really means an awful lot anymore. I think people are struggling with that. So, yeah, I like where I am, I like that positioning — I’ll take it!

Emerging Masters
Rolex is proud to support The Talks’ new interview series about the cultural leaders of the future.
Will Goldfarb's new book, Room for Dessert, is out now via Phaidon.
Life
World Guide
PICA South American Kitchen
Will Goldfarb
Restaurant