Vineet Bhatia's new restaurant Rasoi by Vineet looks to open in November 2019 at Jumeirah Etihad Towers, Abu Dhabi.
Inspirational Conversations
Rolex is proud to support The Talks as they continue to feature inspirational conversations with the creative icons of our time.

Mr. Bhatia, what does authenticity mean to you as a chef?

Authenticity means nothing for me, honestly. What is authentic Indian food? The biryani, the samosa, and the kebab are not really Indian! They all come from Persia. Samosas are known in Persia as sambooseh. The North Indian tandoor is called tanür, it’s from Afghanistan. But they have become an integral part of India to the point that they are considered Indian cuisine… Having said that, what is important to me is authentic flavours. That is very key for me.

How do you go about creating those authentic Indian flavours?

Through the use of cumin, the use of green cardamom, the use of saffron, the use of rose petals, the use coriander powder, the use of star anise, for example. Those are what gives a dish the actual flavours of India. If I’m cooking in Europe and I’m using cod for example, which you don’t get in India, I would use the same spices as back in India but with locally caught fish. Just like I wouldn’t expect the classic cooking which I learned back in India at every restaurant in the UK or in the States.

Apparently when you first moved to the UK and started working at the restaurant Star of India, you were very disappointed with the Indian cuisine you experienced.

I came from a very classically trained background, from luxury hotels and through hotel schools so I had learned the basics quite well and knew and understood classic Indian cuisine quite well. When I moved to London in ’93, it came as a shock to see this food being done very differently. Even though these days I no longer expect the exact style of classic cooking which I learned at home, these menus had dishes which are not Indian by any understanding.

“When we got our Michelin star, that really puts you on a really different podium. You are then taken a lot more seriously.”

Well they were serving biryani, for example, that was just spices tossed with meat. They’d buy the cheapest cuts, often frozen. It was basically a stir fry. That’s not what biryani is, biryani takes you 78 hours to cook! I was the only Indian in the entire restaurant working there, the rest were all from Bangladesh. I realized that’s why things were different back in the UK then.

There was a lack of skills and knowledge…

Right, and I mean no disrespect to them — they were basically immigrants who had to make a living, so that’s what they did. The Brits love Indian cuisine because it’s been a part of their society for so many years, and the Bangladeshis found that niche market. Cooking came a bit more easy for them, so most of the Indian restaurants in those days were run by Bangladeshis. They didn’t really have the skills that we were taught in India, and in those days, the visas were very difficult to get for chefs from India. So there was a lack of trained manpower.

What kinds of dishes did you introduce to your colleagues to bridge that gap?

I was a young kid, only 24, when I joined as their chef and a lot of the people working at Star of India were actually quite senior in age. I realized very quickly that these guys would not change so most of them quit in the first three to four months. And the boys who came in to work were young lads, 19, 20, 21. So they were a blank canvas, they were starting out fresh, it was much easier to mold them. I taught them things that I learned as a child, like classic street food, samosas, chicken tikka, masala chickpeas, potato cakes, rice pudding… The basics, but dishes that are simple comfort foods which they can relate to and understand.

Since then you became the first Indian chef to earn a Michelin star, and went on to earn two more stars at your own restaurants. Has it been difficult to get the locals in London to accept your elevated style of Indian cuisine?

It was very difficult initially, we were very fortunate and we had some very positive reviews which came and really gave a boost to morale, especially in 2001 when we got our Michelin star. That really puts you on a really different podium. You are then taken a lot more seriously. But at the beginning in around ’93, the first six months were hell. There were guests who were walking out of the restaurant saying, “This is not Indian food. What are you guys trying to do here?” One of the very first things I had made was a lamb shank rogan josh, which I served on the bone. I remember the guests came and said, “We are not dogs. We don’t eat food on the bone.” Now everybody wants to eat food on the bone because that’s the best way to cook food! So that was a lack of education. 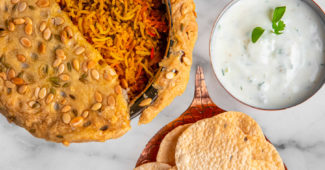 Massimo Bottura said that to do contemporary cooking, you need to know everything, and forget everything.

Yes! You have to question things in this day and age. You can only break a rule or bend a rule if you understand the rule firstly. I left India because I was trying to modernize the food and I was told Indian cuisine should not be changed. So I went to Europe, to London, hoping to be accepted but that was not the case. I have travelled extensively, not only all over the world but also in my native India and I’ve realized that in cooking, there are no rules anymore. It’s an open boundary now and you have to cook for where you are. And that’s what we do.

Which experiences during your travels have been particularly eye-opening in that respect?

I remember going to Mexico where I saw black corn for the first time in my life. I saw black potatoes too, and that blew me off! We had never seen black potatoes or black corn before. And when you cook with them, it’s beautiful. Why should corn fritters always be yellow? Visually, black corn is so interesting and the flavours can be dramatic.

Do you think your acceptance of these new ingredients has helped broaden your creativity or your willingness to experiment?

Definitely. It’s very educational. You have to have an open mind as you travel. There’s so much inspiration around you, but if you go with blinkers on, you see nothing. The more you travel, you realize that there is so much more to offer that a lifetime is not going to be enough for what you can learn.

Inspirational Conversations
Rolex is proud to support The Talks as they continue to feature inspirational conversations with the creative icons of our time.
Vineet Bhatia's new restaurant Rasoi by Vineet looks to open in November 2019 at Jumeirah Etihad Towers, Abu Dhabi.
Life
World Guide