Ms. Beecroft, when did you first become interested in the female form?

There was always this obsession of female representation in me. When I was growing up in Malcesine on Lake Garda, Italy, there was a group of girls living close by and together we would draw images of our dolls with red hair, freckles, green eyes. They were supposed to be like photographs and they even had captions... We drew several of these photo albums every single day for three or four years. That was the first time I was very conscious of the fact that I was only interested in girls and women in terms of representation. Even when I went to art school, I was fascinated by the nude models. But in Italy at that time, there was a lot of censorship towards figurativism so that made things difficult.

Is that why your early work featured mostly live models instead of hand-drawn or sculpted figures?

Yes, at the time, I was very young and I felt that if I wanted to have an impact on society and in the art world, using those skills like drawing or sculpting, I couldn’t. I wasn’t able to because of this censorship of non-conceptual art in the early nineties. If you practiced any kind of figurativism, you were deemed some sort of nihilistic and conservative artist. I did not want to do that, so I immediately constrained myself and decided not to. 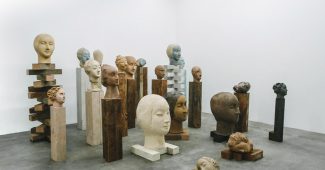 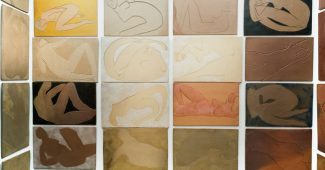 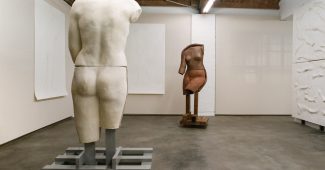 But these days your work has represented the female form in clay, bronze, marble, and drawings. Are you now consciously exploring all the mediums you neglected when you were younger?

Well, to be honest, these all just happen randomly. The marble was a consequence of plaster. The plaster pieces were a consequence of a show I did in Palermo, Sicily when I was asked to leave something tangible behind after a performance I’d done; so I created these casts of women which were placed next to the real women in the performance. In Los Angeles, there was only clay, so I decided to mold them. But I think these are all the same girls, just made from different materials. And obviously it’s a Vanessa Beecroft girl because you can recognize certain traits and a certain common denominator that is autobiographical.

Jeffrey Deitch once said that you always put the girls who look a bit like you in the front row of your performances.

Yes! He said, “Vanessa, the girl in the center is not necessarily the most beautiful, the most attractive, or the tallest but it’s always the girl that has elements of you. You always put your alter ego in the center!” And I didn’t really know that. It’s all a bit unconscious. But I’ve realized that even when the women in my show are black or even if they are men, the figure, the main character is me. They all look like Beecrofts! (Laughs)

“I felt like a stranger most of my life. So the Beecroft in these sculptures… Maybe I’m trying to represent something I’ve missed all those years.”

Not on purpose. When I made the clay heads for my show at Pio Pico, I went back to certain skills that I learned at school like drawing, painting, sculpting… I put the nose, the eyes, the mouth — and all of a sudden, they all look the same. It is funny. I thought maybe since I hadn’t drawn or sculpted for so long, these faces keep coming out like a compulsive pathology. Some people even say, “Oh, they just look like you with that expression.” Maybe tomorrow I would be able to draw a tree, but at the moment I am unable to represent anything else but the human form.

Would you say that their expression is a reflection of how you feel?

It’s probably different elements. My mother and I moved from England to Italy when I was very young and I never saw my father again until I was 6 years old. I was raised in a village in Italy where I didn’t really identify much, we looked very different to the people around us and I felt like a stranger most of my life. So the Beecroft that I represent in these sculptures… I’ve never asked myself this, but maybe I’m trying to represent something I’ve missed all those years.

Growing up in that rural village in Italy, you were far removed from any kind of pop culture. What has it been like working in perhaps the height of pop culture, luxury fashion?

My mother left her life in London on purpose to live with nothing but culture. Just books, no cars, no men, no meat, no TV, no phone… Absolutely nothing. So for me, pop culture is a completely exotic concept. But I was always fascinated by elements of fashion because at a very early age, I found Vogue Italia. It was very beautiful. And I started to be inspired not only by the background of Italian culture, painting, sculptures, but also by Vogue, Helmut Newton, Steven Meisel, David Sims and other photographers… But these days, I still don’t know any celebrity. I didn’t know Kanye West when he contacted me. 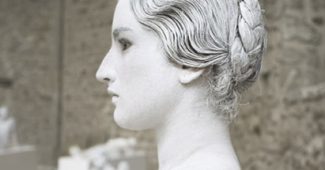 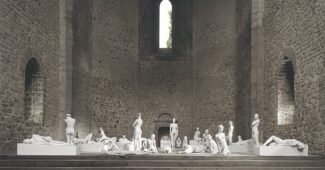 What is it like now finding your work in a world you aren’t very familiar with?

I’m flattered but at the same time, I find it very dangerous, like a wild world where it’s very fast and you could easily be forgotten. Personally, I’m repulsed by pop culture! I don’t like the music, I don’t like the imagery, I like only very little fashion… I don’t like the objectification of everything: the sexiness, the sensuality. I find it shallow. I do get depressed when I look at a magazine. I never went to a discotheque. I could never bear it! I never wanted to belong to that because it feels juvenile and therefore decadent. We’re going to age! So I want to prepare all my life to age with dignity. It is just a sphere that I never found interesting.

Does that make it difficult for you to engage with the fashion industry?

I don’t think I would ever do the kind of work I did for anybody other than Kanye! It was just because it was him and he was so involved and so human. His relationship with me was so human that I never felt it was a corporate company. His company is him. It was like a relationship with a friend. With the shows, I felt that it was a mission, like it was a cultural and anthropological mission.

Would you still consider your work with him to be performance art or are these runway shows completely separate representations?

Both. The Madison Square Garden show, for example, we did a huge casting, more than a thousand people. When the models got on stage, they were not allowed to talk, they had to contain their impulse to dance or sing. They weren’t like the audience, dancing and playing around, they were just still standing there on the stage — just like in my performances. Their emotion was just coming out of their expression and their eyes. And Kanye became their voice. It was like a gospel. To me, that was a historical painting. But it was actually a performance. That was actually one of my favorite performances because it’s something I would never do on my own.