Mr. Sachs, where does your interest in making things come from?

I think I first started making things because I wanted them, it was like sympathetic magic, you know, you build a model of your enemy’s fort and then you burn it down or you make a voodoo doll. The power of positive thinking: if you believe you are halfway there. As a kid, my dad really wanted this camera. He couldn’t afford it so I made the Nikon camera that he wanted out of clay and I gave it to him. It was a pretty rustic thing that I made as a kid but through the making of it, I was able to give him something that he really wanted.

So your creativity was initially fueled by desire?

Right, I made things because I wanted them. Consumerism was the sort of ritual of my community growing up and making this clay camera was a way of contributing to that. Half of having an expensive camera is the image that it captures, but the other half is holding it and desiring it and appreciating what went into making it. I think a lot of collectors aren’t even so much interested in the original intention of the thing but what it means to them as a consumer object.

“I think that anyone can make whatever they want. People are out there making their own Tom Sachs stuff because they want one and they can’t get their own.”

How does that interact with your own work? Could anyone use your brand to make their own Tom Sachs piece?

I think people do! People send me pictures on Instagram and stuff… I think that anyone can, and they should, make whatever they want. People are out there making their own Tom Sachs stuff because they want one and they can’t get their own. I would absolutely encourage it because we start by making something that is someone else’s — I start with a Chanel guillotine and then I make another one, and it is even more an expression of me. I’m a participant of this culture; I’m part of the system! That’s an important distinction.

Are pieces like the Chanel guillotine or your Prada toilet also representations of that initial interest in desire?

I’ve always admired and appreciated Chanel but I couldn’t really rock it because it wasn’t for men. I started to try and use that brand in my art and bring it into my life as a way of participating; I put Chanel logos on things when I wanted to make them more powerful and give them more authority. I’m also interested in how sexy Chanel makes my wife look but also how its advertising contributes to her body dysmorphia, and that she is both aware of yet victimized by it. This is something that has been plaguing me my whole life: the effect advertising has over our self-image. Even though we understand that, we continue to be part of the addiction and contribute to its power. 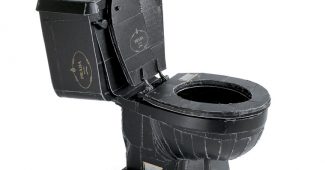 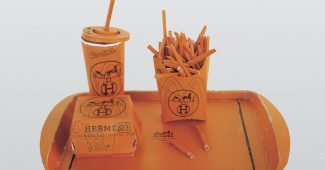 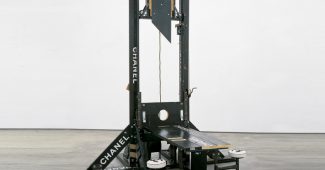 Is it fair to say that you use these brands to an advantage as they help to place you within those luxury worlds?

I wouldn’t necessarily say it’s solely an advantage… Think about it this way: every time you buy a BMW, you have this great advantage of this luxury consumer product — but you’re also subject to the tyranny of its system. To have a luxury car requires great expense all down the line. They’re expensive to buy, they’re expensive to maintain, they’re incredibly fragile. You’re buying into a system; you become a subscriber. I’m a victim of this system as much as I benefit from the luxury of the experience.

How does your art fit into that?

By infusing my art with a Chanel or Hermès or Prada logo, I bring a little bit of the baggage, good and bad, of those brands to the sculpture. I love heirloom brands — and so I make heirloom products. I love things that are meant to last. Whenever I’m buying something as a consumer, I always ask the salesperson or myself, “Don’t you have anything more expensive?” because I’m always trying to get something that’s closer to the things that I make, which are in a way, the most expensive. I make things that are meant to last for generations and if I’m successful, they will.

Is that also where your more recent interest in NASA and the Space Program stems from?

NASA is the ultimate fashion brand — it’s the Chanel of the scientific community. It’s got the most power, influence, and the highest-quality stuff. Just like with the Chanel logo, I’ve used the NASA logo to help bring authority and power to my sculptures and projects like my film, A Space Program. That magic spark, the thing that we don’t understand; the idea that something could have landed on some distant planet and then grown over many, many millions and billions of years into some form of life… Of course, that’s fascinating to me as well. But I also think that my interest in science and space is an armature for investigating a lot of things.

The trailer for Tom Sachs' 2015 art film, A Space Program.

Science is the closest thing to religion that I have. Like a scientist, I’m always comparing, trying things out, I have a lot of failures, a lot of things go wrong. My films or sculptures about space are actually a reflection of the life that I live. Ultimately, the thing I study more is me. There’s all this stuff that I don’t know, like, why am I so neurotic? Why do I these particular things and why now? Why do I make these same mistakes? What? Why? I’ve spent a lot of time in psychotherapy, looking inside myself.

Has it taken you a long time to come to terms with yourself?

Well, I realized quite quickly that my job as an artist is understanding and accepting myself so that I can have the courage to make just the right wrong decisions. So, I’m always looking into my past for that reason. I try not to measure success in any tangible way though. Art is art — good, bad, or indifferent.

Commercial success is not important to you?

There are many thousands of artists; very few of them are recognized publicly, and even fewer of them are consecrated by prosperity. The value and virtue of art is 99.9% in the making. The exhibition, the buying and selling of it, all of that commerce is a different world, and it’s a world that I’m lucky enough to be able to participate in but it’s not the priority. The priority is always in the making. If you ask any artist who has an exhibited career, they will all agree that they would be doing it for free. And that’s true for me, too.

Sarah Morris: “There is no outside”

Robert Longo: “I went back to the beginning”