Mr. Raue, are you a competitive person?

(Laughs) No, I’m totally not, and you know why? I don’t care what others do. I rarely give a shit. I met a chef who was bragging that 95% of his clients were happy with his food. And I asked him, “Did you go to every customer and ask if they liked it? What the fuck do you care about that?” The problem is that he has never come on that level of cooking. He’s not self-confident enough so he needs others to tell him how good he is. I don’t need that.

How do you measure success if you don’t consider yourself competitive?

Well, I don’t get crazy for anything. Of course, I was really happy that we ended up on the 50 Best Restaurants list; we have Michelin stars, I’ve received every award which is available. I was also happy when Netflix asked me to do an episode of Chef’s Table, for example.

“To be the best? I don’t know. I don’t think it matters where you’re ranked on the list.”

Did those accolades bring about noticeable change for a restaurant that was already doing well?

Of course. You get recognized around the world! People fly to these restaurants and have two meals and fly home. Netflix also gave us a lot of American customers. And yes, that gives me confidence but it also doesn’t mean that everything is done to please everyone. We have conservative customers who still complain that there is too much flavor! I realized that if you listen to every customer, you’ll go crazy because it’s always really subjective. In sports, you can be the fastest, you can be the one who scores the most points, but in cooking… To be the best? I don’t know. I don’t think it matters where you’re ranked on the list.

Being on the list at all is the important thing.

Right. It’s the most important thing! To me, it’s all about business.

Is it true that some people are critical of you for owning so many different restaurants around the world?

It’s mostly in Germany that people think like that. Germans think that, for example, if you go to the opera, you have a main singer, the main attraction. If he or she is not there, then the opera is closed. And to Germans, it’s the same for chefs. If I’m not here, it’s supposed to be closed. But it’s not! This is something I learned in Asia and the US: running a business means 24/7. It doesn’t matter if I’m there because the members of my team, the head chef is there. I’m not the head chef at all my restaurants, I’m the owner. 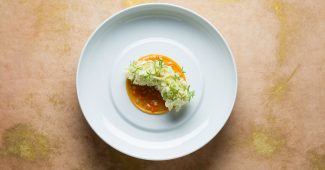 These restaurants are part of the brand of Tim Raue.

Yes. Do you see Louis Vuitton himself at every Louis Vuitton store? It’s just branding. (Laughs) These critiques are also something that I’ve had to learn to ignore… In the end, if I’m good at cooking is one part of it; the other one is to fill the restaurant, to get an audience.

Apparently in your early days, you made the conscious decision to provoke and overdo it rather than be average and have no one recognize you.

Yes, it’s still like that for me. You can be the restaurant where someone leaves and afterwards they say it was nothing special… Or you can be the one who is kicking it up a notch with the palette and the flavors. And I think that’s the better way. The difference between me and every other chef out there is my flavors and how I use them. In my earlier days, I was much louder.

I wanted more acidity, more spiciness, more, more, more… In Germany, my generation was totally dominated by French cuisine. We learn it in school, we cook like that, that was the classic set of techniques and flavors… But I switched to Asian and that was kind of a rebellious move for me. I’m not a punk and I cannot show that rebellion in my fashion sense or on the outside. But with the food, that’s where I could always express myself so at the beginning of my career, I didn’t create the menus for balance; I was just looking to provoke.

Was it worth it?

Of course! When you’re first starting out, you have to make a lot of mistakes. Most of the best chefs don’t make those mistakes working under their own name; they start as sous-chefs, and even the first dishes they create, they run it by their boss, the head chef and the restaurant owners. But I never had that kind of boss, I became head chef at the age of 23 so I had to make my mistakes by myself, and I was judged for them.

“It was not that I was really good at cooking, it was that I was good at leading the pack.”

Chef Anne-Sophie Pic said that her early days facing the world of cuisine alone were incredibly hard, but that was the way it had to be to come out stronger in the end.

Yes, absolutely. One of the reasons why I have this much success is because I’m hard on myself. Until now, I never really saw myself as a talented chef! I don’t take the easy way. I put in the time. From the age of 17 until 23, I didn’t take any vacations, I had almost no days off, I was working 14-18 hours a day. The only thing that concerned me was achieving the next step. It was not that I was really good at cooking, it was that I was good at leading the pack, good at making schedules, structures, and I worked hard for the next step. Cooking for me, at least in my early days, was survival.

Coming from poverty at that time really meant that my job was my tool for survival. If I fail, at the end of the day, I would have to go back on the streets. I could die if mistakes were made and I couldn’t work anymore. And that was the way that I acted and handled it in the kitchen — life or death. When you’re on that level, you verbally abuse people…

And you did that?

I did. And it was wrong. I was really lucky that I had staff around me who stayed with me even though I was an asshole, a complete pain in the ass for them. I used to yell every day, five times an hour in the kitchen because I didn’t have the confidence to just ask, “What’s the problem? Why didn’t you follow the recipe? Why didn’t you use this ingredient?” or whatever. And that’s senseless. You need to show that you see the value in your employees, and that’s something I’ve really had to learn over the years. I’m really adapting. I try to keep everything in balance.