Thomas Joshua Cooper's new exhibtion The World’s Edge is on display at the Los Angeles County Museum of Art until 2 February 2020.
Emerging Masters
Rolex is proud to support The Talks’ new interview series about the cultural leaders of the future.

Mr. Cooper, you’ve risked your life to photograph the natural world in some of its most foreboding and dangerous locations. How do you reckon with this possibility of death?

I'm usually not scared almost ever, even though I'm not a trained explorer — I'm an artist. When I decided to circumnavigate the Atlantic Basin, from both poles and both polar circles, and all five continents, that required me to enter into very difficult terrain that even experienced explorers would have have had difficulties in doing so. I was engaging in situations that were as likely to kill me as anything that I could think of: falling in sinkholes, drowning, quicksand, being crushed by ice, being bitten by snakes… And in all kinds of weather! There were times where I would fall in the ice covered sea or into quicksand and I was on my own and it was improbable that I would get out, and I did.

How is it that you came to survive?

You know, after a while, I started asking myself the same question, "Well, God damn, how did I manage to do that? No one else so far has ever done this… How come I survived?" I got lucky! You come back from these things and you realize how lucky you are, and at a certain point, you realize that luck runs out, no matter how well you prepare, so you learn not to be scared of that. Everybody's scared of something at some point, you can cross the street and almost get hit by a bus. That'll scare you — but that's not what I'm talking about. It's about deep-seated fearfulness, when things go so wrong that there's no way, necessarily, that you can imagine that they can go right.

“It's not really possible for most people to figure out how they're going to meet their end. I've tried to, and I'm not sure that I can either.”

Apparently to overcome that fear, you had to come to an acceptance of death by telling yourself you were already dead.

It's a Japanese ritual. It translates that the person undertaking the ritual is willing to deal with the problems that they've set themselves, including death. So for me at least, the inevitable worry of being in very difficult, very trying, and very unforgiving circumstances is in some way not only released, but it’s actually almost a joyful release. Subsequently, I haven't had to think about it much since then. Things happen — prepare to figure out how to save yourself, prepare to figure out how to die with some degree of decency, because at the end of things, it's not really possible for most people to figure out how they're going to meet their end. I've tried to, and I'm not sure that I can either. Preparation is all you can do.

What kind of preparation do you undertake in a technical sense? It must require a lot of planning to figure out how to transport and set up your large, cumbersome camera in these precarious situations.

Yeah, I use an old camera, it’s a five-inch by seven-inch view camera made in 1898 on a big tripod. Everything I do is and everything I work with is very purposely used and constructed to require me to slow down. The view through the camera is upside down and backwards, so it's naturally abstract and distant, and you’re right that it requires a lot of time and concentration to figure out what one has seen when they've looked through it. Then I make only one picture at any site, so every picture is unique. I find a place, I circle around it, I find a picture spot, and then bring the camera to that place, and try to reinvent, rediscover… If that works out and if I'm careful enough then the picture's made. I leave and I never, ever go back into a space I've made a picture of.

But what happens if that picture doesn’t turn out?

(Laughs) That's a really good question and as stupid as I often feel — and I'm sure as stupid as I look — it's just a big zero! I've been doing this for 50 years, so at a certain point, you either get so you know how to do what you need to do, or you failed so badly that there's nothing for you to do at all. But I don't fail too often. I believe that if a person prepares well enough and carefully enough and respectfully enough, then whatever you get will be at least satisfactory. If you're really careful and fortunate and well-prepared, then it could be amazing. 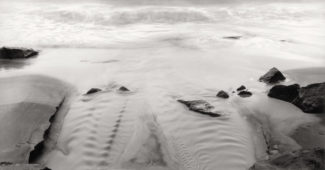 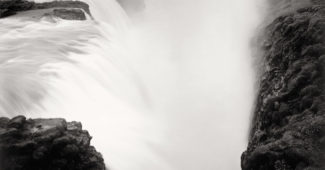 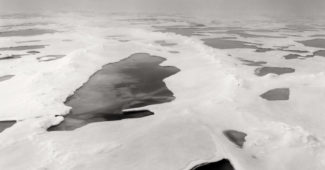 On several occasions, you’ve been the first person, and in some cases the only person, to reach certain locations that you have photographed because they are so remote.

When I stood on a bit of broken Sastrugi at the North Pole, I was freezing to it. I'd fallen in the sea, in the Arctic Ocean and Christ, I was by myself… I thought I was a goner. It's 4,000 meters deep and I was on my own! I had the greatest good fortune to get out and back onto solid ice, and made this picture. And even then, looking around, I went, “Oh, God.” Outside of private moments with my family, in my life the most joyful, the most true, the purest, most wonderful things that have ever happened to me are those moments of being able to see something for the first time. It's just thrilling.

Have you gotten desensitized to the enormity of that over the years?

No, never. If that happens, I should be struck down immediately. I should be killed. That's a really important question, because it's such a human question. That idea that familiarity breeds contempt is complete crap, in my opinion! In places where I've been fortunate to be one of the very few people in the world to visit, like the north-most point of the continent of Antarctica, I'm the ninth person in the world to have stood on the point to look at it. It's maybe the hardest physical place in the world to get to; it's 250 feet of ice wall resting on the bedrock. I've been really fortunate, I would even say blessed, to be able to stand there. It just shimmers. I get shivers, just absolute shivers.

Somehow that sense of wonder is very evident in your photos.

I do hope that my pictures come close to conveying some of the joy and also some of the strangeness of these situations. It's the fearfulness that happens when these really intense sightings take place. But boy, for me, they're never anything but the most extraordinary, humbling, and transformative moments of my life.

You’ve previously said that in standing in all these remote places, you hoped that you could learn something. What kind of things have you learned?

That's the crucial question! The only reason to do anything, as far as I'm concerned, is to learn how to do the thing that I'm doing. So, picture making is of prime importance. But through that and within that and because of that, to learn how to be a better human, to learn how to be more human, more understanding, more alert, more forgiving, more allowing, more alive to the world. There's no other reason for me to do anything. To try and make the world a little less fragile, because the world is fragile. That's part of what I've learned from my work, that this huge thing that we live on is hurting because of us, and that shouldn't be.

“I don't have a big voice for big things. That's for bigger people, not me.”

Do you hope that people are moved to act on issues — like climate change, for example, or the refugee crisis which you sometimes touch on — when they see your photos?

Well, yes, I hope big things but if a person like me hopes for anything big, then they usually get slapped in the face. So, it’s tricky when you mention big issues like climate change and the tremendous plight of the refugees, which I do comment about through the work. I can hope for really big things, but I'm not the kind of artist that can bring that about… I don't have a big voice for big things. That's for bigger people, not me.

What small changes do you hope your work incites?

My work maybe brings about small feelings, remembrances, recognitions, thoughts that maybe have lain quiet for a while and suddenly just come to the fore. If thoughts occur that the viewer might not have had without seeing the pictures, then my pictures have done their jobs. My work as an artist is complete. I’ve always vowed to work singularly, uniquely, with respect, with slowness, and see what happens… Because that's the joy, I think, of being an artist. Just trying to see what happens, and if you are lucky and you see well enough and intensely enough, maybe that scene communicates in some way. We live in the hope that what we do maybe makes sense to somebody, and if we're lucky sometimes it does.

Emerging Masters
Rolex is proud to support The Talks’ new interview series about the cultural leaders of the future.
Thomas Joshua Cooper's new exhibtion The World’s Edge is on display at the Los Angeles County Museum of Art until 2 February 2020.
Life