Mr. Hoepker, has the world of photojournalism changed much over the years?

In the time that I was very active as a photo-reporter in the 1960s and 70s, bombed-out Germany was so eager to understand the rest of the world. People had no idea about what things looked like around us: travel was difficult, expensive or even impossible. It’s not like today where everybody has been everywhere already or seen it in the movies, on television, or learned about it online. We loved that exclusivity but also it was a certain pressure to look at the world and form your own opinion of it that you’d then share to an audience. For young photographers today, it’s very, very different.

It’s a totally different ball game today; the world has been discovered. When I was first starting out, I worked at Kristall Magazine in Hamburg. The first big assignment I did, my editors sent me and another young reporter named Rolf Winter — a friend of mine — to America for three months. Our editor said to us, “You’ll fly to New York, you’ll rent a car, and then you drive west — all the way west, west, west until you come to the ocean. Then come back and show me what you saw.” We had this open ticket to drive from coast to coast and do whatever we wanted. It sounds like a dream, you know?

“I was lucky to grow up in this period where everybody was curious.”

That would probably never happen today.

Exactly, the conditions have changed drastically. There is much less money to spend on photojournalism today because now we have television. Many talented photographers have to travel at their own expense — a risk that was taken from our shoulders in those early days. It’s a totally different world today. I think I was just lucky to grow up in this period where everybody was curious, you know?

Is curiosity maybe a photographer's most important trait?

Of course. I went to Bihar, India to report on the famine, flooding, and small pox epidemic in 1967. I said in a meeting that I think this is a very interesting thing we should cover, that we should go. But nobody else wanted to go because small pox was contagious! So I travelled to India, I took some shots and… I was all by myself but in hindsight I think it was the right thing because I took very important and very moving pictures that came from this curiosity about the situation there. It was a heartbreaking thing; people would come to me, shaking, showing me their wounds and hoping that I would bring them something, but I had nothing. I had my empty car and my camera.

I guess curiosity often extends into morbid fascination: your photos of the food crisis in Bihar won third prize in the World Press Photo Contest in 1967.

Right, the macabre thing is that they’re very photogenic, these situations, because people not only are they sick and dying but they look it as well, they’re skeletons. And that type of photo always got in the magazine. So, sometimes you are a little shallow and think, “Okay, I need a good picture and that’s it.” But sometimes there are moments when you need to think beyond the picture.

“Taking good pictures is one thing, but once in a while you have to go beyond and do something meaningful.”

How do you accomplish that?

Well with my Bihar photos, the magazine not only printed the story but they also organized a big fundraising event with their readers. They included the German government and the army and the air force and the doctors, so that out of this little article in one issue, a big operation was sparked. Taking good pictures is one thing, but once in a while you have to go beyond and do something meaningful. You have to at least get the feeling that you’ve done more than just reporting, the feeling that you did more than just click the shutter.

That kind of responsibility is especially crucial in situations where your work could be interpreted as simply exoticizing.

Exactly. You could be pretty arrogant because you are the white guy, the money, and here you are taking pictures of hundreds of dying people… And then you go back to your hotel and have a nice dinner. This could be shocking. So in these cases I stayed in the village for a month, trying to survive. That said, in most cases like these, you are pretty helpless… But at least you’re giving your readers something to think about beyond shopping.

Do you develop a certain instinct for those kinds of moments of historical significance?

Sometimes you simply have to be lucky. You could go to an interesting country or city and you go around with a camera on your shoulder… And nothing happens. It’s like hunting, you go into the woods and the sun is shining but you don’t catch anything. And then there are days, not so many, but there are days when you’re lucky and things come together. When I was shooting Ali for the first time at the Rome Olympics back in 1960, for example, he was an unknown boxer… He was just Cassius Clay at the time. I found him very interesting from the first moment I met him but I had no idea what he would become. My most famous portrait of him came about completely spontaneously, no rehearsal, just luck. 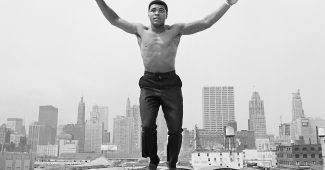 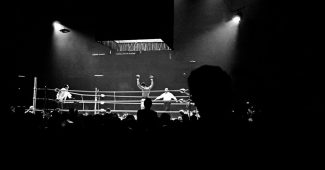 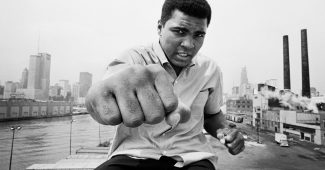 You’re talking about the photo of him jumping on the bridge over Chicago, right?

Yes. I spent around two weeks following him around in Chicago a few years later in 1966. One day, we were driving over the bridge across the Chicago river and I said, “Can we stop?” We stopped the car, Ali took his shirt off and I said “Jump!” And he jumped. I got one click! One photo and we went somewhere else… I only photographed him once in a real fight, and everything else was his normal life. And he was eccentric; more and more, we understood that not only is this a very strong and disciplined person, but this is a fighter. One of the reasons he was so successful is that he was totally unpredictable.

You never knew; he might show up that morning or might not show up at all. He could be wonderful one evening, “Let’s go have a drink,” and then next night he ignored me, didn’t want to talk, had a bad mood. I think this is why he was so good in the ring because the other guy never knew what was coming! There was this famous fight, “The Rumble in the Jungle,” where Ali didn’t do anything in the first round. He was just standing there. The other guy got really angry and when the other guy was really tired, Ali knocked him out. He was a genius.