Mr. Ropac, as one of the most successful gallerists in the world, do you find it difficult to decide between things you want to collect for yourself and things that you want to sell?

I’m confronted with this decision every single day. I sometimes compete with my best clients over pieces. Sometimes people say that if a gallerist is also a good collector then he will never sell the good pieces! But we’re here to place the work. And I have 80 employees in galleries in both Paris and Salzburg that all want a salary at the end of the month, so of course I have to keep the business afloat. But I’m in a fortunate position that allows me to keep some of the works. My collection is growing over time and eventually it will really mean something. I still feel young, so I still feel I haven’t entirely reached my goal.

Do you have to like something personally in order to exhibit it or represent that artist?

Of course we don’t choose artists whose work we don’t like – that would be a funny thing to do! That is exactly the freedom we have. Museums have to make an overview of where art is, they have to take in things they like and dislike. But as a private gallery, we are in a position where we can choose what we show and whom we represent. There are too many great artists that I get very excited about for me to work with artists that don’t get my emotion going. Without this, I would not be good. I just know myself. 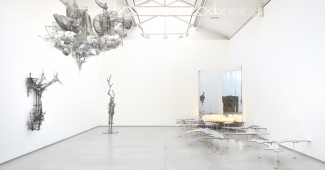 At what point did you begin to trust your taste and have confidence in the things that you like?

Well, I was fortunate enough to meet Jean-Michel Basquiat before he was known in Europe. I had never heard the name; he was this African-American working in a basement in New York. After I met him, he gave me a portfolio of his drawings and that was my first little show at the beginning of the ’80s. I believed 100% in this artist, but in a naïve way. I didn’t know much, but I believed in it. I didn’t need somebody to tell me this is great, I felt this is great. I don’t know, maybe it’s a gut feeling. I don’t know why it worked out so well, but I always believed 100% in the artists I worked with. There was no doubt in my mind.

How did you get in touch with Basquiat?

It was my first visit to New York and I didn’t know anybody there, but through Joseph Beuys I was connected with Andy Warhol. I was a nobody from Austria, but I asked Warhol about young artists and somehow he said, “This is a young artist.” Of course, I maybe wouldn’t have looked at Basquiat so carefully if somebody else had given me his name, so it was helpful for me that it was Warhol. But when I first met Basquiat, I did not know what to expect. I went in and he was working on the floor… It was an amazing experience. And it led to several shows during his lifetime. We worked together between 1982 and 1988. We had four wonderful shows with him.

Having met so many artists over your career, do you believe that some people are great artists and some people simply are not?

I’ve seen artists trying so hard to be great artists, trying very hard for years, dedicated to it every day, but just not making it. I think you don’t learn to be an artist, and you don’t learn to create a great work of art. It’s a gift. You can study – I’m a strong advocate of art schools. I’m involved in the Fine Arts Academy here in Paris and I always think it’s a good idea that people start to learn if they feel they can do it because it gives you an advantage. It speeds up the process because you receive guidance from professors that are often successful artists themselves and this helps you. But nobody can tell you to create great art. Nobody. If it is not within you, forget it.

“Contemporary art was hardly taken seriously before, but now people are aware of the art of today.”

How has collecting and selling art changed in the last 30 years?

It started like a very elitist thing in an ivory tower. People hardly knew anything about contemporary art and the art world also presented itself like an elitist club – not in terms of money, but in terms of approachability. I’ve seen it move into the center of life today, which is a very positive development. Now art is really part of almost everybody’s life, automatically. Contemporary art was hardly taken seriously before, but now people are aware of the art of today. And that is so much more exciting.

It’s true that a lot more people are interested in contemporary art, but to me it still seems to be in the ivory tower.

There is still a generation, I guess, that is not so aware. But even my housekeeper knows a little bit about art… In sports news they make references to Jeff Koons. I find that surprising! They don’t even need to explain it, they just use it as a reference. As good as this is, it also brings attention to contemporary art that has attracted a lot of speculation and we see the result in today’s prices for certain artists.

I read that you sometimes have people showing up at the gallery with suitcases of money wanting to buy art pieces. Was that a literal statement?

Yes, it happened! But it was just one incident. We do business with a variety of art collectors, so that was just one example of how things can go wrong. We try to protect our artists from the price rising too rapidly, but we are not the ones who decide. The market has become very fast. At the auction houses, there are huge groups of advisors and art consultants. Some of them are very serious and they know what they are doing, but some of them don’t. They just want to be associated with the art world, which at the moment is very chic, without doing their homework first. They turn collectors almost into speculators by saying, “Buy this today, and sell it tomorrow as a profit.” It is language you would have never used before. We still try to avoid this as much as we can. 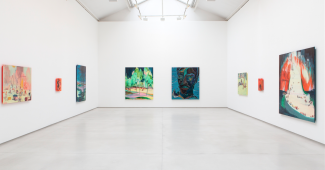 Art Basel Miami is one of the places where the most art is sold, but it’s also become a pop culture event with celebrities and parties and all these other things going on.

Miami is a good example of how things can potentially go wrong. If the parties are taking over the art… I’m not against it and I don’t want to say that their motivations within the art world always have to be the most idealistic. I’m not saying that at all. But Miami has become quite a circus. I don’t want to judge it, people seem to have such a good time there and I don’t want to spoil their fun, but the question is: how much good does it to do for the art world itself? And that I don’t know. I cannot answer that. If it brings attention to the art, it’s perfect. If it takes away the attention and channels it into pure entertainment, then of course I’m against it.

Why is it important for you to discriminate among your buyers and not just sell to the highest bidder?

We’re trying to accompany artists for many years to see how they develop and how museums and the press treat them. We want to help them go through all of these important steps of a career. So we still try to work with collectors or people who want to collect, but where collecting means something beyond the point that you just want to use it as an asset within your portfolio to invest part of your money. Of course there’s a responsibility that it holds its value, but to only put money into focus is not something we would want – to reduce this to a pure investment vehicle or speculation.

It was not necessary before to be careful, because the few people that found their way into contemporary art were welcoming because it was such a small group. You couldn’t really speculate so much on contemporary art and people bought for other reasons. They wanted to live with contemporary art, they were curious. In the last 10 years the context has changed a lot because it has become such a market-driven business. But I think the positive effects of contemporary art becoming more mainstream outweigh the negative aspects. I’m happier today than 30 years ago in terms of the attention artworks get and how much of an integral part art is in life today. In the end, we are in a very fortunate situation today. People are hungry for new art, new artists. The worst is ignorance, when people are not interested in looking at art, but people are more and more curious.

Inspirational Conversations
Rolex is proud to support The Talks as they continue to feature inspirational conversations with the creative icons of our time.
Life
World Guide