Ms. Donovan, why do you leave your artworks untitled?

At a certain point I felt titles to be very unnecessary. I think once we make a work and put it out there, we have very little control over what the viewer experiences. A lot of conceptual artists intentionally inscribe meaning into their work or write it out on a wall text next to it to explain it, but that often feels like a forced message, which has never really been something that I’m interested in. Viewers bring their own associations when they experience a work of art — and then they read a wall label that could contradict their own interpretation.

With no titles to guide your viewers, you must have heard some surprising associations about your work over the years.

This was a long time ago, but I remember there was this group of young people — I think they were around seventh graders and, you know, kids that age say exactly what they want to say. All of the kids had a very different take on my paper plates sculpture they were looking at. One of them was like, “It looks like snakeskin!” and the other, “It looks like garlic!” (Laughs) A lot of things that I certainly hadn’t even considered.

“I welcome these interpretations. They allow for my work to function long term as artifacts from a recent time.”

Have you noticed changes in how your work is being perceived these days?

My work has always been viewed in terms of consumerism and in relation to all the materials that I’m using. But recently many of those same works from over 20 years ago have been considered in terms of global warming, geological time, and environmental hazards, which became part of broader discussions on the Anthropocene, the new phase of geological time identified with the imprint of human development and waste.

Are you comfortable with those kinds of interpretations even though it’s perhaps not what you had in mind when you were creating?

I welcome these interpretations. They allow for my work to function long term as artifacts from a recent time when these concerns weren’t given the urgency they deserve. Even though you’re right that my intention was never really to make comments about the environment in my work, I appreciate the conversation that is currently happening around it. But I think that if what I’m trying to achieve is successful, then there is an understanding of the idea of transcendence — when something like a gestalt happens: you’re seeing the work as a unified field of material, and you think it’s one thing, then you approach it and upon close inspection you discover what the individual unit is. I like to think that I have somehow rescued these materials from a sad, toxic fate.

Does a work’s re-installation contribute to that gestalt phenomenon for you personally, seeing all it taken apart and put back together?

When I make an installation, it’s often comprised of hundreds or thousands of parts which can get assembled differently each time, so they’re not just these static objects. And then everything about each new exhibition space can change the work too: the lighting conditions, the ceiling height, how far the lights are from the floor, whether there’s natural light… 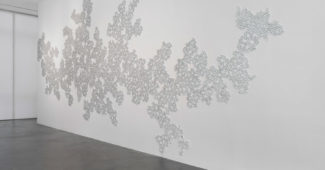 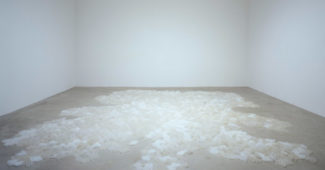 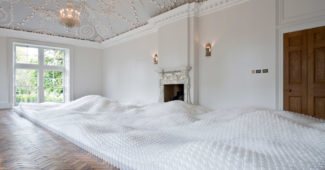 The term “site-responsive,” instead of the more common “site-specific,” is often used when talking about your installations.

Right because I mean, there is nothing that isn’t site-specific. It feels like an overused term and site-specificity tends to, in my opinion, reference historical understandings of context that I’m not particularly dealing with in the present. By using the term “site-responsive,” I am simply indicating that my work responds to the architecture and environmental particulars of a given space by shifting registers of shape, volume, scale, and density—all factors that directly influence perception.

What architectural spaces have you found most inspiring lately?

I’ve always been interested in architecture, but what comes to mind in terms of inspiration is that I recently took a trip to Mexico City and I spent a lot of time walking through Mexico City looking at how materials are distributed over nearly every surface at street level. It was almost a filmic experience filled with textures and patterns that were constantly moving and I found that completely inspiring. It was fantastic. I recently showed at the Museum of Contemporary Art in Denver which is a building that is designed by David Adjaye. He has a real sensitivity to light, there’s natural light coming in in a very diffused way. And that was perfect for my work because all of the pieces I create are responsive to light in a very specific way.

And do you consider those factors when you’re making the work itself?

When I start my installations or sculptures, I don’t have a set idea on what the final form will look like: the final form really evolves out of the intuitive process of making. I often say that I work very much like an architect or a scientist in the way that I kind of isolate something and experiment with it in the studio until I develop a set of basic rules for production. In works such as the tar paper piece or the drinking straw piece or the Styrofoam cups, I create a basic task to be repeated…stacking, gluing, bundling, etc. The final form, however, becomes an intuitive thing—I don’t map it at all.

“I’m constantly creating problems that don’t even exist and then figuring out how I can deal with it and present in a different way.”

Has that intuition always been present for you?

Yeah, I mean, I really don’t approach things any differently now than I did 20 years ago. I feel like in some ways I’m constantly even trying to remind myself, trying to get back to the basics of what it is that I’m trying to do. Sometimes I intentionally almost regress to kind of stick to the core. I think my work has evolved, but my approach to making it hasn’t really changed that much. The scale of my work is always defined by some kind of framing, for example.

It could be a literal frame, or it could be the framing of the room. So much about being an artist is about creating a framework you work within — I think you create rules and give yourself boundaries to work with and then, within that, you have to be flexible. Because you created this whole problem yourself. (Laughs) I’m constantly creating problems that don’t even exist and then figuring out how I can deal with it and present in a different way.

Gabriel Orozco: “I try to be disappointing”