Dr. Sylvia Earle's new book Ocean: A Global Odyssey is out now via National Geographic.
Emerging Masters
Rolex is proud to support The Talks’ new interview series about the cultural leaders of the future.

Dr. Earle, as one of the world’s foremost oceanographers and a renowned environmental activist, what does it take to lead a revolution in the way that you’re doing?

Well, when we’re talking about saving our oceans, I would say: just look in the mirror! Everybody can do this, everybody should do this. No one can tell you what you're capable of doing, who you are, what power you have, better than yourself. You have something special that makes you you. What are you doing with that special something? How are you using your capability to move from where we are now to get to a better place? We are experts at eliminating not just wildlife ecosystems, but we've gotten pretty good at eliminating other humans as well. We have to make peace with this blue planet that keeps us alive and with other humans who share this journey.

And time is really running out to act on problems like climate change, overfishing, pollution…

We don't want to lose this chance. Something that people don’t understand is that we are all sea creatures. We need the ocean as much as coral reefs, kelp forests, tuna, swordfish, whales, you name it! Without the ocean, we could not exist. Our actions even in just my lifetime have seriously degraded the health of the ocean; especially in recent decades, as our numbers have increased and as the technology to modify the earth has vastly changed and given us the ability to, for example, clear forests in minutes on a scale that was unthinkable until right about now. And the same is true in the ocean, to extract wildlife by the ton, it is drastically unsustainable.

“Everything on earth connects, we can see it, we can measure it, we can document it. It’s not a mystery. It’s there for us to understand! Our existence is anchored here.”

Unfortunately part of the issue is that those practices that are actually destroying the earth can look like industrialization or progress to some people.

Everyone should look at the evidence! Everything on earth connects, we can see it, we can measure it, we can document it. It's not a mystery. It's there for us to understand! Our existence is anchored here on this miraculous blue planet, and respecting that should make us realize that protecting nature is no longer a luxury. The United Nations, individually and collectively, are now aiming to safeguard at least 30% of the ocean within the next 10 years. Not because it's a nice thing to do but because we need to do this for our own safety. If we're to survive, we have to protect the systems that keep us alive. At the COP 26 Climate Conference in Scotland just recently, Colombia, Costa Rica, Ecuador and Panama joined forces to create a protected ocean corridor within their national jurisdiction. Other nations are also beginning to see that they have the opportunity to safeguard this vital ocean system.

Your Hope Spots initiative, an integral part of your Mission Blue program, is also working towards that same goal, right?

Yes, the concept of our Hope Spots program builds on the ethic of caring that we’ve been speaking about here… That you can't take all of anything and still have what you had in the beginning — you can’t cut all the trees and still have trees to cut. So with our program, individuals and communities can nominate and become champions for a certain area of the ocean, and safeguard that place by pledging to make a difference. Rolex has been a major supporter of this initiative: it connects with their Perpetual Planet program. They have really stepped up to help make expeditions to support these champions, but they’ve been also communicating about why it matters, and sharing information about what you can do for the future of humankind.

The sharing of information seems particularly vital to this effort — has it been a challenge to spread this knowledge successfully in ways that the average person can understand?

Well, for example, with my newest book A Global Odyssey, it was written during the pandemic. For the whole world, Covid 19 has been a serious problem. But for me, it also provided unexpected upside, and that was that I had to sit still confined, basically, to my desk for more than a year. And with the help from colleagues, photographers, and oceanographers around the world, I was able to come up to date with the current knowledge of the ocean and put it together in a way that would be accessible. 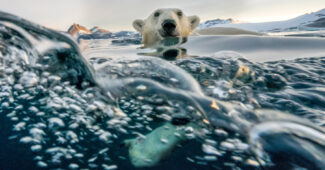 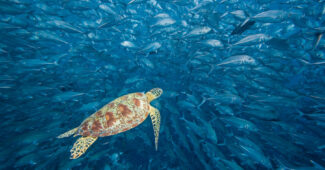 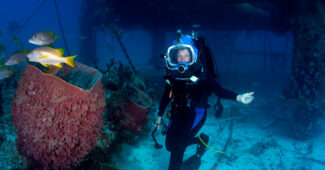 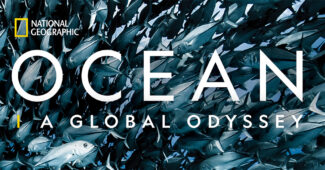 Underwater photographer David Doubilet says that pictures have power. I can imagine that the dozens of ocean photographs in your book really help to make things more digestible.

Beautiful images certainly help tell the story of the ocean: What do we know about the nature of the ocean? What is water? Where does it come from? How deep is the deepest part of the ocean? Another consideration was to make the information conversational, you know, to sort out hundreds of really nerdy scientific documents that are not comprehensible to most scientists, let alone to the public at large. We also have profiles of explorers and scientists and visionaries, stories about Hope Spots and places that are protected. That’s really essential in providing information not only to scientists but also to kids and anyone else interested.

Many reviews of your books actually mentioned that they’d bought the book to give to their sons or daughters who hoped to become marine biologists.

Something that I share with Jane Goodall is her reasons for hope: that kids really shine in this important conversation. I mean, I first seriously became connected to the ocean as a kid in Florida, and I began diving in 1953. But the places that I loved and began exploring, I watched them disappear and I didn't know how to do anything about it. There were forces that seemed beyond my power. But kids today know that climate change is an issue! Nobody really thought about this in the middle of the 20th century, but now we are in the 21st, it's headline news. And while the older generations are held back by beliefs, by laws, and by habits, I think the kids are saying to us, “Get over it!” They understand that we've got a problem and they want to help us get with it and do what it takes.

Emerging Masters
Rolex is proud to support The Talks’ new interview series about the cultural leaders of the future.
Dr. Sylvia Earle's new book Ocean: A Global Odyssey is out now via National Geographic.
Life