The Counterspace designed Serpentine Pavilion is on display until 17 October 2021.
Emerging Masters
Rolex is proud to support The Talks’ new interview series about the cultural leaders of the future.

Sumayya, which architects have inspired your career?

Personally, I like architects who are using a lens of difference as a creative force to bring about something different into the world. So someone like David Adjaye has been hugely inspirational for me in that regard. Something I think that's less often talked about is his cross discipline, he works also with music, he works with furniture and product design. He's done so many collaborations with other forms of design that I think need to be included in the architectural realm more and more, because from these other ways of being, there are so many different ways of space-making. Zaha Hadid also, I think that her perspective at the time brought about something completely new and different in the world. And that's something that I find deeply inspiring.

It’s also interesting to have these different perspectives when it seems like for a long a time, the architecture world was comprised mostly of older white men.

Yeah, absolutely. I mean, to a degree, the profession is still largely white male. And more than that, as a South African, I think it's not just about bodies that are present and the fact that there are not enough bodies of color and perspectives of difference in the profession… But also that the entire system we're inheriting is still privileging certain ways of practice. It's still very, very embedded. In school, I was often told that there was no room in architecture to talk about what I was working on or the cultural perspectives I was bringing. And that was only 10 years ago!

“We are all insiders and outsiders, our senses of belonging are very plural. And so to think about African identity is very hybrid and resonant with ways of being for most of us in the world.”

How does your firm Counterspace try to create new ways of practicing?

Counterspace was born because out of a hunger to bring different perspectives into the world. My practice is about trying to find design language and design expression for my city, for Johannesburg, for the African continent. But at the same time, I think that there's so much of all of us that is plural and hybrid, we are all parts of east and west and north and south. We are all insiders and outsiders, our senses of belonging are very plural in that way. And so to think about African identity at the moment is also very hybrid and is also resonant with ways of being for most of us in the world. So of course I'm interested in that in terms of thinking about form and space, but a big part of that is also looking at how we practice and how we work.

Look, for example, at the Serpentine Pavilion, which our firm CounterSpace designed this year. I took inspiration from all kinds of places that have been significant to how people have constructed home and belonging in the city: places of worship, spaces of cultural production, atmospheres that people bring from their home regions, places that hold mother tongues, cinemas, venues, places where people came to meet and organize during times of protest. Then I mapped and abstracted them. And because the Pavilion project is choreographed, it is durational, it has an aspect of ritual attached to it in how people come together around it. All of that, for me, is resonant with an African way of being that can push practice forward: it's not just about the static object, but it's very much about forms of remembering and honoring and practicing that are alive; that bring together many voices in the making, activating, and realizing.

It’s more about the experience a place instills, both in its construction and afterwards.

Right, I think that there's something about this idea of the event that has always been central to my practice because in Africa, it’s exactly that! There's so much that happens through the construction of an atmosphere: how people come together, not just what they come together in.

Francis Keré says that architects can often be egotistical in their vision, when they should really be thinking more about the cultural and social circumstances of their design.

I completely agree that community engagement is really important, but that’s not just achieved through listening to people, it’s also about looking at forms of archive that have been overlooked. So thinking about the land, its toxicity, that’s a form of archive. For the Pavilion and also for the special fragments we placed at different locations around the city, we looked at old posters for events, photographs, and publications that document the places that weren’t otherwise well-documented. That’s how I found a lot of the spaces for the fragments: a theater for black women, one of the first black booksellers in London, several arts centers…

Yes! Definitely. We had a list of maybe 52 places that inspired the Pavilion, and these ones are very, very active sites; they've been holding community over a long time. I wanted to be able to highlight the work that is happening in these places, because many of the places are from the archive and have even been erased from from the city, or they have come under threat. They’re resilient, and we have to work to elevate them. 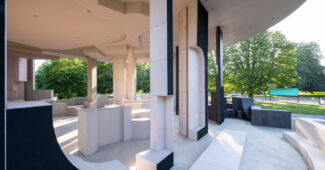 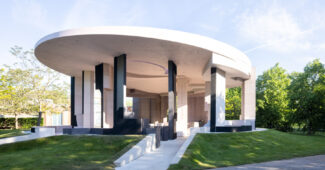 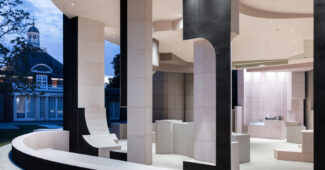 You also moved to London in order to get a better sense of the city while designing the Pavilion. Is that typical for you?

Yes, for me, it’s essential because my practice is interested in translating place and in expressing the identity of place. I think that is always present in all of my projects because I see it as being very much about listening to a place, being in dialogue with it. Of course, at home, I'm very interested in working deeply with Johannesburg and in reading beneath its surface. There are many spaces from my childhood and from my upbringing that have been important to my own identity. I grew up in an Indian only apartheid township called Laudium, and I had a very community. There was definitely a sense of spirit in the time that I grew up in, because we were coming out of apartheid.

How old were you at the time?

I was four years old when we became a democracy, but I remember and I feel very strongly in my childhood, that there was still a sense of optimism and a sense of hope about the fall and the end of apartheid, and about the rainbow generation. I think because of that, community spaces became very important. My grandfather’s store was very important in that respect; he was a migrant trader and many other shops on that street were owned by other migrant traders. Those stores became a stronghold for community, they were places where people looked after each others’ children, where I met people from different backgrounds…

Where people came together.

Exactly. I identified with what was going on on the street because there were local tastes and flavors that were indigenous to me, sights that were familiar to me. But I think that like that they are so many places in so many cities that do that for people. That’s why what we’ve been saying about including different voices and championing representation is important: architecture is an assertion of who we are. So if we don't see forms of representation that are resonant with us, that's a form of exclusion. Plus, all of these perspectives and these ways of being offer different answers to the current crises and the current challenges that we have — the climate crisis, racism… They exist because we've only been slanted towards a particular worldview for so long.

Do you think things are improving in that respect?

Yes, I think there's still a lot of work to do but I also feel like at the moment, there's a certain energy towards improvement. For me, it’s very exciting as a designer to be able to draw on so much cultural richness and diversity and texture and everything. And when I look at the work of my students, I can see and feel that there is also this energy of change and a realization of the importance of being able to tell these stories.

Emerging Masters
Rolex is proud to support The Talks’ new interview series about the cultural leaders of the future.
The Counterspace designed Serpentine Pavilion is on display until 17 October 2021.
Life