Olivier and Karl, can you recall the first time you were amazed by architecture?

We both share strong emotions for the Beinecke Rare Book & Manuscript Library at Yale University, which we discovered during one of our first trips to the US. What impressed us was the mystery of the architectural object, designed by Gordon Bunshaft: the discovery of the immense inner space; the sacredness of the box within a box, and above all, the natural light treated as a material. On the other side of the spectrum, we love the Saint Sophia church in Istanbul. Regarding this we could actually say the same: a mysterious and solid object that houses the most gigantic space, incredible light — and the smell! Sort of like the smell of millennia that may separate it from the Beinecke Rare Book Library for instance — but there is a common sense of spirituality expressed by all spaces.

What kind of spirituality?

Well, we perceive emotions through any period of architecture. From the most archaic to the most contemporary and abstract object. As long as it feels honest and culturally grounded.

“As architects, we dream, we suffer, we go through intense emotions ourselves.”

Your aesthetic has been described as rigorous, minimalistic, chiselled, but also peaceful, and earthy. How do you inject these emotive qualities in your minimalist work?

We don’t think anyone can sincerely decide to inject emotion. As architects, we dream, we suffer, we go through intense emotions ourselves — especially when our clients see the project coming to life. When they get emotional over it, it means a great deal because the project also reflects our deepest intimacy. We try to put ideas, words and feelings before shape and form. One of our clients told us that rather than working on the look of places, we focus on what they should feel like. Someone once used the word lyrical to describe our architecture!

Antoine Predock says that every project he takes on is like a poetic encounter.

Right, we don’t reject that kind of language. We love to use storytelling for decorative projects, mainly public spaces. For instance, for the Musée Yves Saint Laurent in Marrakech, words came before everything else, in an abstract way. So we started by asking Pierre Bergé, who commissioned us, how the idea of this museum came to his mind. He told us that when the first YSL exhibition at the Jardin Majorelle received such a wide public acclaim, he discovered how strongly present Yves Saint Laurent remained in people’s hearts and fantasies. But we wanted to avoid the mausoleum-style museum, as well as avoid any direct reference to Saint Laurent’s tastes. 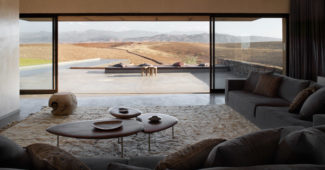 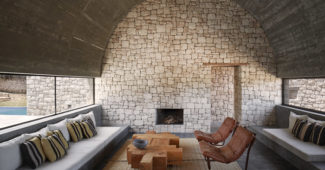 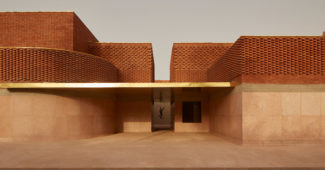 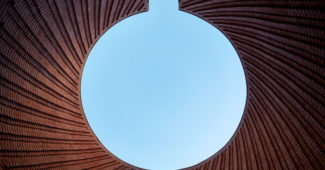 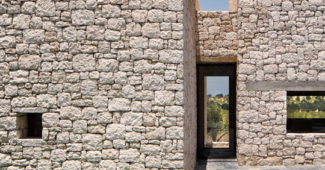 How did you ensure that?

We tried to pay tribute to his relationship to craftsmanship and textures, as well as to his love story with Morocco. So, we wrote a text about a sort of textile of clay that would wrap around an immaculate space, and then translated those sentences into sketches and forms.

Can there ever be too much lyricism in architecture?

This is more a debate between our projects of refurbishing public or residential places, versus our architecture projects that we build from scratch. For our architectural projects, we try to use as few materials as possible — it’s more about subtracting than adding. For our interior projects, however, we can be very decorative and the result could be a superimposition of layers. It’s always a conjunction of taste, fate, and chance when an object crosses your way, and connects with your client’s singular story. That connection will dictate whether a certain armchair, for example, is right, if it has a place in your space… And objects that are right and make sense cannot be decorative! It’s all about the sincerity of an object. If something is there only because it’s expensive and it has to be shown as such, it’s not a reason good enough for this object to take its place.

What is an important facet of interior design that people often overlook?

People forget the extent to which their homes speak volumes about them and are deeply revealing. They also forget how much a home is a portrait — even a self-portrait, when no architect comes into play.

“Most of our projects retain that home-like feeling for us in some way.”

How was the experience of weighing these factors when it came to creating a home for yourselves?

(Laughs) It actually became overwhelming; it drove us mad! We were surprised how much we disagreed on secondary details, what bad clients we’ve been for ourselves, easily changing our minds throughout the whole plan. The contractors were really worried to see us acting like this! But in the end, we made a very special home for ourselves in Paris, that brings us so much joy. The place was already amazing because it’s very unusual, with an almost Italian vibe. Sometimes we forget that we are in the heart of Paris. But most of our projects retain that home-like feeling for us in some way. We sometimes even still have the keys from some of the villas we have created, and we can return anytime because most of the times, our clients became our friends.

What surprises you most when you revisit your projects?

Our places age so well, it’s crazy! But under one condition: to have love from their owners. They age well because of the simple and noble materials we use — we prefer not doing a project, rather than having to do one that employs plastic or aluminum windows, for instance. This idea guides us in the choice of materials we are going to use for a project, and we like to think that our buildings will one day become some sort of beautiful ruins. But our projects, whether they’re residential or public — they’re supposed to bring joy, otherwise something is missing. Joy throughout the whole process: first alone, then with the team and with the workers on site. And, finally, joy to the clients when the project is achieved.