Simon Starling's new show,A-A', B-B', is on display at The Modern Institute in Glasgow until 9 November 2019.
Emerging Masters
Rolex is proud to support The Talks’ new interview series about the cultural leaders of the future.

Mr. Starling, your artwork centers on themes of construction and deconstruction. Have you always been interested in transformation?

I have a father who’s a bit of a DIY guy. He didn't like to pay other people to do what he thought he could do better himself. He had this wonderful workshop with a lot of tools and materials, and for me growing up that was a great release for my ideas and experiments. I think that sense of possibility, of being able to affect the world and the objects in it comes from that early experience. I guess in general I’ve always had that curiosity about how things work.

Which objects interested you most as a kid in that respect?

When I was about 12 or 13, I built an acoustic guitar in a very improvised way using linoleum flooring to make the curved sound box, and so on. And so, I suppose that was the earliest experiment, I did it to see if it was possible to make that object in a DIY way and to make it actually function somehow. I don't think it played very well, but it was something I was very proud of.

I guess it’s the experience that counts, rather than the end result.

Sure, I loved collaging things together if I couldn’t make something work in a new way, I had this sense of collage and bricolage, like, trying to come up with solutions for things. As a teenager, I was windsurfing a little bit but then I realized that when I wasn't near the water, I could hook up my windsurfing sail on my skateboard. I drilled a big hole in my skateboard so I could stick my windsurfing sail into it. (Laughs)

“Along the way you discover something quite by chance, that then sticks in your mind and you hold it there until it finds a moment in which it resonates.”

I'm sure it didn't ollie so well after that anymore.

I guess it was extremely dangerous. I was in and out of casualty a lot as a child!

At what point did your love of transformation find its way into your art?

I’m not sure exactly. I started by making photographs. I built a small darkroom in my parents' house and spent hours making probably fairly bad black and white prints in there and got very sucked into that. During my studies I realized that that one medium was a bit limiting for me, so my hands-on-making began in earnest during my Fine Art studies in Glasgow. So I do feel more as though ideas and images and materials come to me.

Well, there's this sense that you're working on one particular project and along the way you discover something quite by chance, that then sticks in your mind and you hold it there until perhaps it finds a particular context or moment in which it resonates. As an artist you get a reputation for working in a particular way and so curators or friends or colleagues will dangle things under your nose and suggest that you might be interested in them. And sometimes you are…

But sometimes you're not.

If the process is constantly in motion, how do you know when a work is finished?

I don't know if they ever really are. I mean, there are often works that you make for a particular moment and then maybe the next time you show them, you show them in a slightly different way so that they become more precise or more communicative. So they're constantly evolving. Also, when you stick one work next to another work, suddenly it has a new resonance. You could almost argue that, in that new context, it's a new work again. So I don't know if you ever really finish anything.

Does it get harder to keep that momentum as you get older?

Early in my career, I had this sense that I was dreaming works of art or something. When you're in your twenties, things seem to come very easily in a way. But as you get older, I don't know, the brain changes and you're also far more demanding of your work. So yeah, it does get harder. But still there are these moments where something pops into your mind. 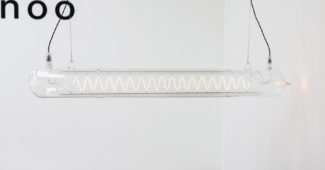 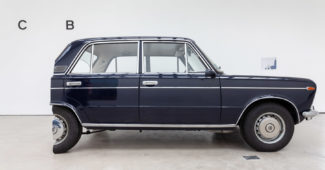 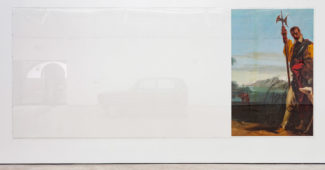 What sort of moments have popped into your mind lately?

Well, I've recently connected to this Tiepolo painting that I saw in the collection of the Agnelli family in Turin, something I saw I think 10 or 12 years ago. It popped into my mind again recently when I discovered that that painting was actually once part of a bigger painting that was cut in two — one half of it was in Scotland and one half of it was in Turin. And suddenly that fact, I don't know, snowballed into this project that I've been working on the last six months called A-A’, B-B’. The Fiat boss Gianni Agnelli was an art collector but also a car collector. I’ve taken a blue Fiat 125, which was the type of family saloon that he drove around Turin in the seventies and eighties, and cut it into two pieces, in the same proportions that the Tiepolo painting had been cut in the 19th century.

And one piece will be displayed in Turin, the other piece in Glasgow?

Exactly. I think I'm aware that this divided exhibition in Glasgow and Turin will be understood in slightly different ways in both places because of its particular frame of reference. It will be interesting to see how the two exhibitions start to resonate in relation to one another and their locations. I also thought the idea of a divided piece suddenly had this interesting relationship to what's going on with Brexit and an increasingly divided Europe. So, things grow in relation to context…

It seems like art will always somehow be tied to politics…

Perhaps at the moment of making it can be, but as soon as it gets enmeshed in the mechanisms of the display and also the market, it immediately takes on some political sense — whether it's within the control of the artist or not.

Do you think that the current political climate will make for good art?

That's interesting, I don't know. I think everybody feels a little bit debilitated by what's going on. It's almost too much to process and respond to, I think, this endlessly unfolding crisis that we seem to be living through. It’s difficult to find any critical distance from that as an artist, because you're so close to it, particularly with the way you consume the media. It's constantly with you, constantly absorbing you. I think that's one of the great challenges for artists these days, to be able to step outside that and look back and reflect in a more steady way.

Emerging Masters
Rolex is proud to support The Talks’ new interview series about the cultural leaders of the future.
Simon Starling's new show,A-A', B-B', is on display at The Modern Institute in Glasgow until 9 November 2019.
Life