Ms. Neshat, what role does memory play in your art?

As a visual artist, there are things that stick with me that are somewhat illogical but that are very emotional and nostalgic. For example, the garden of the house that I grew up in Qazvin, Iran — which has since been demolished — was perfectly symmetrical and beautifully designed. Even now, I could draw it from memory. It felt like heaven inside of it! This for me is the ultimate blissful memory of my past.

After leaving your home to study in the US, you were unable to return once the Iranian Revolution broke out in 1979. How did your relationship to those memories shift when you were living in exile?

I think for people who live in exile and people who have immigrated, there are certain things that they bring with them and there’s a lot that they let go of. It depends on who they are… I do not remember many of my friends’ names, for example, but there are certain moments that I remember extremely vividly and I have no idea why. I think that’s just human mystery. The memory of the garden, though, has been like a dream that always reappears.

“There was so much confusion — I couldn’t go back home to Iran, yet my stay in the US was questionable. I was terrified, I felt cornered.”

What was it like for you experiencing the Revolution from so far away?

I already struggled for a few years after my arrival in the US as it was a complete contradiction to the image that I had of it as a young person — which was that of Hollywood, really. But I stayed, and I was admitted at UC Berkeley in California when the Revolution happened. And shortly after the Iranians took American hostages, the students in Berkeley organized anti-Iranian protests and there was a lot of antagonism on campus! There was a lot of fear.

Because they assumed you supported the Revolution?

Yes, they didn’t know that we didn’t identify with the Revolution, so many Iranians were targeted. There was so much confusion — I couldn’t go back home to Iran, yet my stay in the US was questionable, because Iran and the US had broken down all their relations. And as a young person who was suddenly cut off from her family, it was really hard. I was terrified, I felt cornered. There were a few years around the Revolution that I think every Iranian who lived in the US felt completely volatile in the political situation. The first time I could go back to Iran after the revolution was in 1990.

It was really quite shocking because I remembered Iran as a very liberal and modern society during the Shah period when I was living there. People dressed as they liked. And then suddenly, it was almost like a communist country! There were banners all over the street with anti-American slogans or the image of Ayatollah Khomeini. And all the women were covered! There was a religious atmosphere. Men wouldn’t make eye contact with women. It felt like the color had been lifted off the streets! There was something really totalitarian about this environment that was both scary — and also fascinating. That led to me returning to make art again, for the first time in 12 years. 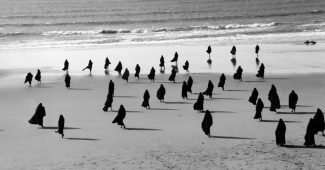 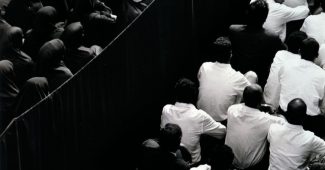 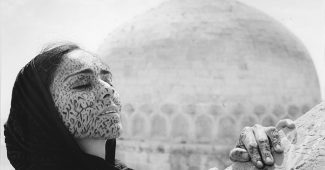 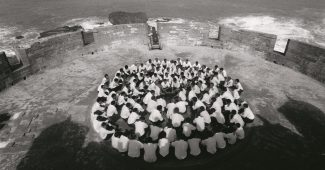 Was that distance from Iran necessary for you to be able to explore it again through art?

I think that’s a good point because if you look at all of my work, the concepts are always driven from a very personal interest, an issue that has been affecting my life directly — but it’s never about me! Any work that I make is very personal, but it’s not autobiographical. After 1990, I started to go back to Iran frequently with my son, to try to find a way of reconnecting: I contacted old friends who were active during the Islamic Revolution, I got recommendations of what to read… And so the work that I created at first became all about the Revolution, about the issues that led to it but also my perspective on oppression and being an outcast.

I think I got tired of it. And things have changed too; now, the whole world is open to me and is welcoming me! It was almost like an attitude on my part to say, “I’m just going to have to move on.” There’s just no way back. I’m convinced that for me the chapter about Iranian society is over, and what is beginning is the experience of an Iranian woman in other cultures.

Like in your last film, Looking for Oum Kulthum, where the protagonist is an Iranian film director struggling to make a film about the iconic Egyptian singer.

Exactly. Actually, when we started to make this film six years ago, it was supposed to be a biopic about Oum Kulthum but it proved very difficult to tell her story as a non-Arab. We had endless setbacks, both artistically and financially — including the fact that the actress that was supposed to work with us had to cancel last minute because she couldn’t travel out of Iran. It really became a test of endurance! And I felt that struggle had to be put in the film, so I slowly became fascinated by the idea of a film inside of film! I realized that just like the filmmaker in the film, I was trying to get under the skin of this mysterious character. And at the end I found that you really can’t demystify a myth. A myth is a myth!

Do you mind people trying to demystify your art?

Well, leaving the political aspect aside — the truth is that there’s no way that the artist can completely control people’s points of view! Because people always approach the understanding of art according to their own experiences, tastes, perceptions, or political points of view. I actually find it fascinating that from the same work you can get extreme, opposite reactions. I think when you’re an artist who’s been around for a while like I have you understand that it’s almost impossible to make work that is unanimously loved or understood! You can’t please everyone, and that is a great realization.