Sarah Sze's new solo show is on display at Gagosian Rome until 12 January 2019.
Emerging Masters
Rolex is proud to support The Talks’ new interview series about the cultural leaders of the future.

Ms. Sze, is it important that your art feels alive in some way?

Well, you don’t know, you just hope. One of the things that’s interesting is that when you put something into the world, its meaning changes over time. It means different things in different cultures, to different age groups… You put it into the world and the alive-ness of it is only in conversation with other people, right?

Is it also in conversation with you?

Sure, sometimes we look at our work and we don’t like it but five years later it’s the only thing you can remember from that entire year of work. As an artist, your work also comes alive with you over time, yes. I think that’s ultimately when I know a work is finished— when it feels like it hovers between many things at once, when it’s in this state of becoming and dying and it can go in either of those directions at any moment.

“I don’t think of them as truly inhabiting any space. I think an artwork is a moment in time.”

Is that liminal space or suspension something you’re working towards as you build your sculptures, or does it just occur naturally?

I think it’s a general idea when I’m creating. I try and get to a place where the work is responding to the process to such an extent that the idea that I started with has expanded. The evolution of the process makes the original thought much more interesting. And then at the end when I’m trying to figure out when to stop, that idea of suspension comes in as a tool. In other words, it’s really not until the end that I try to step back and see where the process has taken the work. It’s only then that I can figure out what last steps need to be taken so that it can stay in that teetering space.

What about the physical space that your work inhabits?

I don’t think of them as truly inhabiting any space. I think an artwork is a moment in time. Sometimes people say, “How can you install in the same place several times?” but to me, the whole conversation is different. I’m a different person with a different idea five years later, and the space is a different container for that time and in that moment. And on top of that, the objects themselves define and measure and mark the space in different ways as well.

For example, somebody was telling me this story about how the architect Eileen Gray used to scale all of her furniture slightly small so that the spaces that she built would feel bigger. Scale is relative, so of course when you put objects in a space, they totally change it and affect it. At the same time, when you go to an art space and you see one of my works where a string is attached to the floor and reaches up a five story atrium, you realize this amazing thing that a string can do. But you recognize that it’s a string. You can imagine how it was done. Being able to imagine the string as a mundane object only makes it more spectacular. 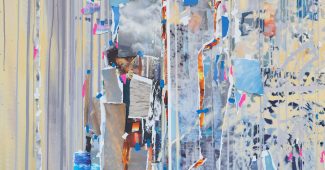 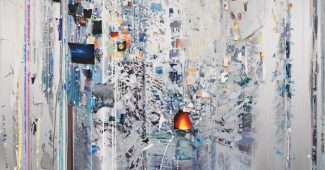 So you’re trying to break down this idea that an art space makes any given object more valuable.

Right, it’s important for me to collapse the idea that something framed in a museum or gallery is more valuable than something you see in everyday life. When you go back to your desk drawer and see a piece of string, remember that you also saw it in a different context and vice versa. That’s a big idea in my Gagosian show: how an object or an image, or generations of an object, can be blurred right in front of your eyes. How the edges of a photograph and a brush stroke of paint can be vibrating in conversation, all at once. You can see an earlier stage of a work at the same time as seeing a later stage at the same time as imagining that something could happen next. There are multiple generations present.

How many generations do you think the average object has?

What I’m more interested in is how we endear ourselves to objects or create meaning from objects or carry conversations through objects… If you go to the Met, you can have conversations over time, over cultures, with dead people, dead artists, because they’re alive in the moment through an object. But as important as each object is to my overall sculpture, it is never about one object being on a pedestal, it’s more about how all the objects interact. There is a total choreography to it in that sense.

Apparently you are always on the lookout for new objects to include in your artwork. What makes something special enough to be used in a sculpture?

In many ways, I want them not to be special. I like to take objects that have a lot of anonymity, that are very mundane, or that have practical uses, and let the viewer try and make that leap to giving it value or giving it a sense of merit, rather than having me hand it to them. So, I’m bringing the volume very low on what is special and somehow putting it in a context where it feels special.

This sort of goes back to what we were saying earlier about the art space determining an object’s value.

Absolutely! A really important part of that perception is these objects whether on the wall or on the floor. Here’s another example: a favorite group of objects of mine are possessions that were with Gandhi when he died in New Delhi. In India, there’s a museum that has on display a box on the wall containing his pocket watch, his letter opener, his glasses… A very spartan, simple collection, like a kit for essential living. And the objects themselves are this kind of incredible memorial to him.

“I started thinking about how we place value on objects: how does an object reflect behavior, and how do we breathe life into objects?”

It has an almost archeological quality to it.

And I think that is what’s so interesting with any contemporary art; when you can see in an object the residue of behavior. Actually, when I was making my first sculptures it was actually the same time that my grandfather was dying. His objects — what he was giving away, what he was throwing away, what was left — they really had an effect on me. At the nursing home, I saw this stripping of his person. They took his keys, his wallet, his credit cards and everything because they didn’t want him to be able to leave, he wasn’t given that freedom… So these were the last objects he had.

Did you ever replicate those objects in a sculpture?

Well, with the first piece I did that was really about objects, I carved all of those things out of soap, all of these different mundane everyday objects in a kind of memorial to him — which I didn’t actually articulate to him or to anyone at the time. But in retrospect, I could see that. That was when I started thinking about how we place value on objects. How does an object reflect behavior, and how do we breathe life into objects? And questioning how objects chart the experience of change and the passing of time.

Emerging Masters
Rolex is proud to support The Talks’ new interview series about the cultural leaders of the future.
Sarah Sze's new solo show is on display at Gagosian Rome until 12 January 2019.
Life
World Guide