Rose Wylie's new exhibition, Car and Girls is on display until 19 February 2022 at David Zwirner's London location.
Emerging Masters
Rolex is proud to support The Talks’ new interview series about the cultural leaders of the future.

Ms. Wylie, looking at photos of your studio is an almost overwhelming experience — but the jumble of materials seems to inspire you. Would you say you thrive in chaos?

(Laughs) I’ve been in my studio some years, and stuff really accumulates; books, wine bottles, paintings, brushes… I’ve been wiping a brush off on the windows for years, so it looks like there’s a painting on the window, but there isn’t! Many years ago, I started working on the floor, and for me, that was very liberating. You walk on your canvases and it becomes a mess, and so do your feet. You become involved, you’re really in it — not just standing there looking at it, but really standing in the work. You can walk across it, you can work upside down, you can pour the paint directly onto the canvas and it won’t trickle off.

How did you discover that unique way of working?

I don’t plan very well, so I would often run out of space for my pieces on the wall. On the floor, you can just keep on extending. Somehow I’ve always felt like easels belonged to another time… I wanted to get away from anything to do with easels, or prepared canvases, or clean, white, primed bought canvases. I don’t stretch them, I work with them either on the floor or I just staple them on the walls, across cupboards and radiators to make more space. You can store them much more easily this way, too, and they cost less money. I think it was lack of space, lack of money, lack of everything, really, that made me do it.

“I think going on with one thing and exploring it as much as I possibly can is as difficult and challenging as bouncing around in all directions.”

Did you also feel limited by the size of a store-bought canvas? Some of your paintings these days can be several meters large…

I like stuff to grow. I don’t like something to be circumscribed by the size before you even start. I don’t start with a structure, it’s just a piece of canvas and I can add bits to the bottom, or cut it into strips, or I start with a piece and then spread it out, so I’ve never thought of it in that way. I like spread, I like big, I like things to evolve. For example, I’ve been doing wall based sculptures for my current show, Car and Girls at David Zwirner Gallery — I was told years ago by a sculptor that my paintings were very sculptural, you know, I have quite isolated figures and they are very translatable into a single object. It’s easy to jump from the image in the painting to the sculptural finished project.

How has it been for you to explore that new dimension and new material with your work?

Oh, it’s very exciting for me. I’m using aluminium, ceramic, and bronze. I mean, I love canvas and I love paint, that’s my real love. And I think going on with one thing and exploring it as much as I possibly can is as difficult and challenging as bouncing around in all directions. However, at the same time, I also like to be diversifying and change and difference… I’m very conflicted! I say one thing and immediately change my mind. But what’s interesting about sculpture is that they can be outside, and that appeals to me hugely.

That’s true — you can’t exactly put a painting outside!

Right, and when you put a sculpture outside, anyone can see it. As an artist, that idea is very appealing. I have this idea to take an sculpture I made called Grumpy Girl and see her as a huge bronze plank, about 80 feet high, stapled onto a Zaha Hadid building. I’m a huge fan of her work, and I think that would just be a marvelous partnership. (Laughs) These are the kinds of visualizations, the fanciful ideas, and daydreams I have… My husband used to say I thought beyond my game! 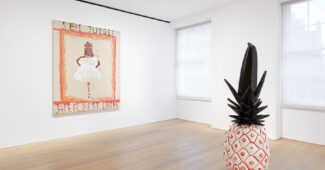 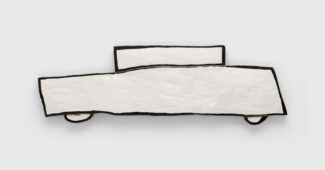 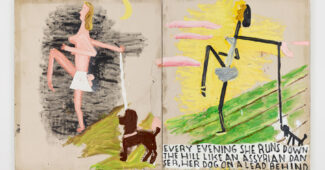 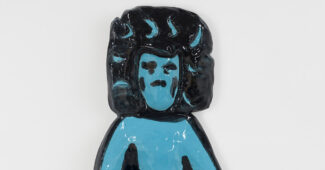 Is daydreaming a big part of your creative process?

Well, no. But I’ve got a lot of time to myself! Daydreaming might not be quite the right word… You project into your context, your field, which is art. You think about it often and you think, “It could be this…”

It’s about being open to all possibilities.

Open mindedness goes into pretty much everything! I made a Christmas cake, and it was an absolutely stunning taste! But you couldn’t cut it, it just crumbled into bits. And to some people that would be considered a failure, but I thought if you just scooped up the crumbs and added a bit of sherry and cream, it was brand new! Marvellous. So, you know, I do like open mindedness, I don’t like being confined by an idea that you have to respond to a certain model. I put it all into the painting!

Your work seems to really embody that philosophy — your paintings feature inspirations of all kinds, from film and television, to pop culture, nature and even your own memories.

Yes, in fact, my most recent painting was inspired by the television show A Very British Scandal, it’s based on this cautionary tale of marrying for money, it’s got all these elements from the TV show. I’ve also painted from Tarantino, I think his films are extremely good and visually dramatic.

“Even though you finish a painting and you feel that exhilaration, you know you’re going to start another one. And starting is a real terror! It’s all full of uncertainty.”

Does that open mindedness extend to your materials as well? Apparently you’ll sometimes just use regular printer paper and children’s colored pencils for your work; like if something works, it works.

That’s quite right. If it works, it works. It’s the same with my actual process of painting, if an idea works, it works, and you go on with it. And if it doesn’t, well, you keep going until it does work. It can take quite a bit of painting and scraping and removing, but anyway, that’s the business. Sometimes it’s layering and layering it, or sometimes it’s done quite quickly. There’s a sort of frantic continuation of painting for five days and then you twiddle with it and then you wish you hadn’t… It’s so precarious, all of it. I don’t know how we as artists get anything done!

The feeling of completing a painting must make it all worth it, though.

You do get an excitement when you’ve done a painting. You feel exhilarated! But then you have to do it all over again. It’s like that bloke who pushed a stone up a hill, and every day he toiled and pushed it up and every evening, it fell down and he had to start again the next day, and that was his life. So even though you finish a painting and you feel that exhilaration, you know you’re going to start another one. And starting is a real terror! It really is difficult. It’s all full of uncertainty.

But you’ve been painting for almost your entire life. It must feel like an almost comforting relationship by now, no?

Well, it’s comforting because you get away from everything, from life, from death, sickness, debt, the horrors of the world. But painting is a different problem altogether: you never know how the painting is going to turn out, you don’t know what to do next. But at the same time, that is a familiar state. You know that usually you’ll get through it, even if you don’t like getting through it. You get through it. And then you have a little bit of fun when you stick it up on the wall at the other end!

Emerging Masters
Rolex is proud to support The Talks’ new interview series about the cultural leaders of the future.
Rose Wylie's new exhibition, Car and Girls is on display until 19 February 2022 at David Zwirner's London location.
Life