Roni, is it necessary to take risks when making art?

I think there are plenty of models of artists who like to stick to and stay focused on one thing. I think of Robert Ryman, who's very important to me. I don't think his work was high risk, but I think it was extremely vertical. And then, look at somebody like Francis Bacon. The nature of his paintings was extremely high risk, because he was always on the edge of losing the coherence of what he was doing. He was on the edge, and you felt that it was essential for him to be on the edge, until whatever resolution did occur, and the work was finished.

Does that resonate with you? You once said that you frequently travelled to Iceland in order to physically see that “edge.”

I think that I'm continually being drawn to it. It's almost pathological. I’m switching a little bit now, but in Iceland, one of the things that over the years was part of my dynamic is a little bit of fear—no, fear is not the right word—discomfort. The landscape and so many of my experiences there offered me just incredible satisfaction. But it also disturbed me! There was not exactly a threat, but some insidious feeling that doesn't go away in some parts of Iceland and I find myself returning to these places because of it. And I can't tell you exactly what the threat is, I suspect it's way beyond my understanding. But I feel like it's something necessary to me. And I think that's a guiding point in my work.

“I think that each medium offers its own comfort and its own discomfort. But overall the work is rarely comfortable.”

Is working with different mediums also a way to search for this edge?

I'm sure that there's an element of that. I don't know that I am doing it consciously, but yes. In the way I work, I'm pretty much forced to do it. It's one of the reasons why my studio is really pared down, I don't have many assistants at all, because I keep changing the skill sets that are needed to accomplish things. On one level, it's a kind of frustrating way to work. But I like that I can go out on many different branches of the tree… I think that each medium offers its own comfort and its own discomfort. But overall the work is rarely comfortable. And I can't say I'm comfortable with being uncomfortable, but I can say that, I’m used to do it. (Laughs). And I'm drawn to it. Discomfort: it's not a question of alleviating it. It's a question of exploring it.

How are you exploring that discomfort these days?

The big one for me is taking the time you need to go there, wherever it is. My work is very conceptual and it takes years to develop and produce. Things are happening that have no manifestation for a long time. One example is You Are The Weather; the idea behind it, or let's say the motivation, was to get at an idea of place through the face alone. So it's the face plus weather plus water, those are the three ingredients, really, in 100 images. That was a six week-long photographic session, travelling to different places throughout Iceland.

You've got something where you don't know! A lot of that type of work is acting on faith, faith in the sense that you believe in that idea, and its potential for an experience that offers discovery, not only to myself but also to the viewer. So my point is, there's nothing until there's something — and that's a high risk proposition. 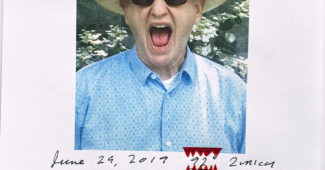 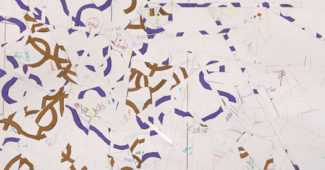 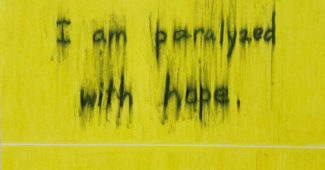 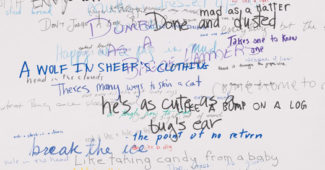 How do you cultivate that faith?

I don't have an answer for that. And I don't mean it as something like faith in a grand sense — it's just a very small thought, one that I learned as a way to keep myself in a progressive relationship to my work, so that I wasn't always kind of going back to the same start. Because, except for the drawings, I really don't have that option in my work. I feel like I'm very much starting from, not exactly zero, but very close. It’s having to arrive, to go through the entire experience... It's possible that there's nothing and there will always be nothing, I've had those ideas, too! (Laughs) And that’s the risk, that you really need to wade through a lot of unknowns to arrive somewhere, that you don't even know if it exists.

Is drawing a way to make sure there is something immediate and palpable at the end of this process?

Well, imagine painting, for example, you have contact with visual from the get-go, and you're developing it, visually. But none of my work develops visually. It develops conceptually and it becomes visual: all the sculpture, the photographic work, the artist books, even the writing, there's a conceptual quality to it. So drawing in a way is an antidote, or a balance to that way of working. And it keeps me more balanced, overall.

Drawing is the exception to the rule of my work in general, because I needed the grounding. I needed the continuity. For instance, I started the LOG series well before the pandemic, and it then carried into it, and I think it’s especially connected to the pandemic energy in the sense that it's just taking things day by day. I decided I would, every day, produce what I would refer to as a drawing, which could be something written, a photograph, website screenshots, maybe even collage; I also included a lot of quotes that I collected. So in a way it's very mundane, and then it's whatever happens beyond the mundane. With the drawings, there's nothing interceding between me and the actual physical labour of producing something.

Because the production of most of your sculptures, photographic and installation work is outsourced to specialists.

Right. Even if I take the photograph myself, or I direct somebody else, I have no one way to go to where I want to go. That is a discovery process for me. For example when I was working with Isabelle Huppert for Portrait of an Image, I knew what I wanted, but I didn't know what it looked like. But I knew Isabelle wanted me to tell her how I wanted her to look, which I didn't want to do. And that's often the reality of things that I'm working on, that the “what it looks like” bit only comes in after the exploration, in a sense. It evolves out of the exploration. To have that option kept open until the very end or close to the end is very high risk for me. But then again, in my work, things do come to an end. They don't they don't just keep going on.

“There's always a difference between what you think you've done, and what you've done.”

Is it important to you that they come to an end?

Yes, and that’s something to do with my nature. For instance, the When Dickinson Shut Her Eyes series, although it took many different forms… I’m finished. I feel comfortable with that body of work as a whole. The glass work is finished. I don't feel a need to continue going forward with it. I think it's on its own now in the world. But even with the drawings, I still need to personally see them in an installation to understand what I'm doing. I can't really move forward in my work until I see, I experience, what I've actually done. Because there's always a difference between what you think you've done, and what you've done. But ultimately it's more the idea that you're going from one thing that maybe doesn't have any visual relationship to another thing. Visual consistency is not something I'm known for.

That’s right! The rational is not really a place to look for answers or resolution in art, that is definitely in conflict with the energy that one brings to it — or I bring to it. (Laughs) I guess that I've never really felt it important. I try not to do anything that isn't necessary. I don't do things beyond my need to do it. Once I lose that need, I stop. And I think that necessity of it — that's a very complex motivation that is harboured in one's life, or it isn't.