Mr. Longo, what were you like in high school?

In high school I majored in sports, rock ‘n’ roll, and girls basically. My grades were really awful and I went to the only college that would get me in for playing football. Of course I didn’t play… I played a little bit, I smoked a lot of pot and took a lot of LSD and dropped out. I went there originally thinking that maybe I would major in music or I loved surfing so I thought maybe I would major in marine biology or something like that, but then I flunked out of all that stuff and I had one last semester to try to save myself so I said, “I could always draw, maybe I should major in art.”

Seems like it was the right choice for someone who now has art in the MoMA and the Tate Modern.

But then I flunked out of art! (Laughs) I basically crawled back to New York and got a shitty job, and went back to school at night and took some art classes. I met a really cool teacher who turned me on to some stuff, but at that point I still didn’t have the courage to be an artist. So I thought maybe I would learn how to restore paintings or be an art historian. She helped me get a little scholarship to go to Europe and study in Italy. But I realized very quickly that there was enough old shit and I wanted to make my own stuff. I think it’s really important in one’s life to have a purpose.

Is art your purpose in life?

I wake up in the morning and I know what I want to do. I want to do my work. I have this purpose and that’s a really critical thing to me. I make the work for me, because I’m compelled to do it. As an artist, we’re reporters. Our job is to report what it’s like to be alive now. We’re one of the few professions left in the world that has the opportunity to try to tell the truth.

You once said, “Making art is about the balance between something very personal and very social.” How do you find that balance?

I view it like an old radio, where you can tune into a radio station. With the knob you could feel it, you could literally hear it come into focus. I think that balance is somewhere between something that is highly personal and something that is socially relevant. And I think that balance is really critical for me and the work. I’m terribly afraid of being boringly narcissistic or bombastic, but I like to come up to the edge of those things.

Your recent drawing of the conflict in Ferguson strikes a good balance.

When I first saw the photograph of the cops on the streets in Ferguson, I was going, “Is this the Ukraine? This is not America…” But then I saw like a McDonald’s sign and an Exxon sign in the background and I was outraged that it had come to that point. This is an example of feeling compelled to make something. You could stand by the sidelines, but I felt compelled to make this image.

How important to you is your identity as an American?

It’s a real problem being American right now… On the one hand I still maybe believe that the United States, as a model, has great hope because it is one of the few countries in the world that’s not based upon a tribe or a specific race or religion. It is of course highly white, Anglo-Saxon, but it’s getting more and more diverse. One great thing about the United States, but also the biggest problem, is that it is like a sports team. We’re all working together, all from different backgrounds, for the same thing. The problem is, the goal of a sports team is to win – and that’s one of the fucked up things about America.

In order for America to win, someone else has to lose…

America doesn’t try to understand problems in the world, they try to win. We’re a highly competitive, irresponsible bully a lot of times. The level of inequality is getting worse and worse, there are more billionaires in the United States than anywhere else… You have the chance to see these things when you live in a city. I’ve lived in Berlin, I’ve lived in Paris, and now I live in Brooklyn in a pretty diverse neighborhood. I can walk a couple blocks over and there’s a Pakistani restaurant next to an Indian clothing store next to a Chinese restaurant next to a Jewish hardware store next to a Japanese restaurant. Okay, their children may not be able to marry each other, but… I think the U.N. should move to Coney Island Avenue. 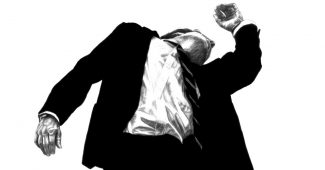 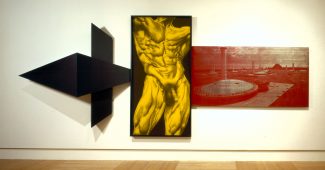 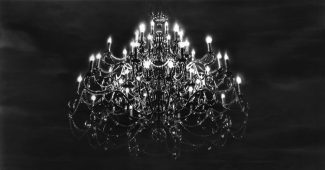 In the ’80s you achieved widespread success for Men in The Cities, a series of black and white drawings of contorted, life-size human figures, and that work continues to define your reputation today. Did the success of that series ever come to haunt you?

It’s only in the last five or six years that I’ve really embraced that work. I ran away from it because I wanted to do other things, that wasn’t the only thing I wanted to do. You know, I realized very early on that this idea that I had was getting a lot of affection and attention, so I focused on that and that was my entrance into the art world, to get support for what I wanted to do. Only in the last couple years have I really started to accept it. I ran away from it because I felt like it wasn’t who I was anymore. But if an image of yours is so successful, at some point it enters into the image culture of the world and you lose authorship of it.

A few yeas ago I was at a show at the Metropolitan and three of my drawings were hanging up in the grand lobby. These are drawings that are 30 years old and my son’s girlfriend asked me if I got the idea for these drawings from the iPod ads. But I’ve been really lucky as an artist to have support for my work from a really early age. And I’ve also been really fortunate in a weird way to kind of have a crash at the end of the ’80s and then kind of rebuild myself.

Was that after you directed the film Johnny Mnemonic? You have previously said that making the film was a devastating experience.

Sometimes you have to be careful to get what you wish for. I learned a lot from that experience for sure and it made me the artist that I am now, but it beat the shit out of me. Maybe one day I’ll make another movie to try to redeem myself, but that was a really difficult experience. It made me realize how lucky I am to be an artist where I don’t have anybody telling me what to do. You realize that everyone who makes movies – everyone from Spielberg to Coppola – someone is telling them what to do ultimately. There are so many people fucking with their product, it’s unbelievable. But I can’t say I regret it. There are parts of the film I really like. I would say maybe 50% of the movie is what I wanted. But the critical response was pretty bad. It did okay financially, but I was lost when the movie was over. I didn’t know what to do.

How did you get back to making work?

It was rough. We were kind of broke, my art wasn’t selling, so my wife encouraged me, “Go back to the studio and draw.” And I went back to the beginning basically, I went back to where I started. And that first body of work that I made after Johnny Mnemonic was called Magellan. I did a drawing a day, images from the world and the media, and that series of 366 drawings basically became the vocabulary, the lexicon of everything else I’ve done since then.

Marco Brambilla is another artist who directed a Hollywood film in the ’90s. He directed Demolition Man in 1993 never did another studio film again, either.

That movie had one of my sculptures in it. Funny story… Stallone asked to have this piece in the movie, right? So they made a copy of it and they were supposed to destroy the copy after they were done with it. And about two years later I was having a meeting for Johnny Mnemonic and I took an elevator and I got off at the wrong floor. I got off on Stallone’s floor and he had kept one of the copies of my sculpture in the lobby of his office. It was one of the most bizarre things. I immediately got in touch with my lawyer and said, “Sue that motherfucker!”

Did you sue him?

Yeah! He had to destroy it. They made two fiberglass copies of my original bronze sculpture for the movie. One of them they blow up in the movie and one of them they decided to keep! It was unbelievable.