Richie Hawtin continues to tour CLOSE worldwide in 2019. For updates on Richie’s sake endeavor, visit ENTER.Sake
Emerging Masters
Rolex is proud to support The Talks’ new interview series about the cultural leaders of the future.

Richie, a 2008 article about you noted that a producer as renowned as “Hawtin doesn’t need to try new things — but he does.” Does that still resonate with you 10 years later?

(Laughs) Definitely. I’ve always had a fascination with challenging myself and even when I was a kid, I wanted to be different, I loved to experiment. My dad was a tinkerer, he worked in robotics and he was building computers and taking things apart. There was also a lot of music in my household, records playing, reel-to-reels… So that wrapped around my curiosity, too. I’ve always gotten a lot of enjoyment when I’m in a challenging situation and I have to learn something else, and I still do. I think it is innately inside me.

And what would you say is your biggest motivation for trying new things where electronic music is concerned?

When I first heard electronic music, specifically techno music, early Detroit records around 1987, 1988, it just sounded like music from the future. And when I heard or met some of those producers, Derrick May, Kevin Saunderson, Blake Baxter, everyone just had this optimistic view of the impossible. And that really, for me, became the fabric of what techno and electronic music is: this push forward, this search into the unknown. I think that’s changed for people over time, but for me it’s still about that intention of taking a step forward.

“We made music with the machines that we found. There were no rules back then.”

But how did that work when you first started DJing in the nineties? Technology wasn’t as advanced as it is now, so it seems like there was less to experiment with.

Actually, somehow there was more to do because less had been done, you know, there wasn’t technology being specifically made for electronic music or DJing. 303s and drum machines were made in the seventies to replace session drummers or bands. It wasn’t made with the intention that one person was going to use it to make a whole new sound.

That in itself was a kind of innovation.

Right, we made music with the machines that we found. You couldn’t go download the latest software, so it was kind of like, “What’s at the pawn shop that I can buy for 50 bucks?” And then later, “How can I squeeze the maximum out of one machine?” I remember I bought a little Bose delay and I loved using it in the studio, and then I thought, “Well, I should use this as much as I can, why not take it to a club and see what happens?” There were no rules back then.

Would you say things are more fixed or regulated today?

Well, these days it’s like you have to decide: are you a vinyl DJ or a digital DJ? If you play vinyl, are you pure or does it have to go through an analog mixer? There’s all these divisions and things you can and can’t do because the definition is so specific.

Over the years, you’ve become known as an artist who not only DJs and produces, but also as a technology pioneer. Would you say that innovation has become part of your image?

Maybe this is because I came up in a different time but myself and the friends and colleagues that I feel really connected to, we live and dream this stuff. There’s no punch card. It’s part of who I am, and what I think about, and it doesn’t just begin or end when I get on stage. The power of technology is absolutely incredible, and even since my earlier days, it has allowed me to beyond my physical house in Windsor, Ontario, Canada and reach people in Detroit, London, Amsterdam. So, I don’t know. Whether or not it’s part of my image; it’s just how I live. 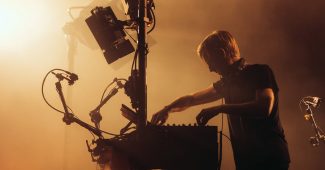 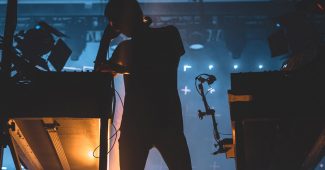 Apparently at one point you decided to make a conscious effort to be part of things — like fashion or art, for example — that were related to music but didn’t rely solely on musical output.

Yes. I just think there is more to music than meets the eye. I’ve got a fascination with art, with going beyond just the DJ booth. What else can you add to music to create a deeper experience? The record cover, the label, the show visuals, lighting; all these things give you a better understanding of the artist behind it. Everything is about brands now but back then, it was just a natural thing. Years ago when I had bald head and glasses, people thought that was like my “brand” but that wasn’t because I decided to create a certain look…

(Laughs) Right, exactly, that was just because I was travelling and it was easier to have a shaved head, and I was blind so I had big glasses, you know? It’s the same with my other side projects, you mentioned my fashion line, or even my sake brand, ENTER.Sake, which just came about because I fell in love with Japan at an early age. I must have been about seven or eight. Then I started travelling to Japan and met people in this sake industry who were artisans, they reminded me of artists on my label, M-nus.

Yeah, they had these crazy ideas and they were trying to use technology and they were so dedicated to one thing their whole life. It’s absolutely incredible. I fell in love with it! I think when you are following life and these little forks come, you don’t have to take them all but I think it’s really interesting to take some of these side journeys and then come back to your main one. This is just my life, you know?

Do you think people tend to dismiss these side projects as gimmicks or distractions?

I think they definitely can be a distraction... Not everyone’s going to like everything you do, but if you stay focused, people who are on that journey with you will understand. That’s all you can do. You can only be who you are. I think that’s probably something that I’m learning now; I’m not the same Rich I was in the nineties. That’s part of me, but there are other facets. So, who am I?

Have you figured it out? At least in terms of your identity as an artist?

Well, I know that right now in terms of my visual identity, I’m interested in man and machine: the human form interacting with technology. There’s so many things going on on stage… It can be like, where does that music come from? How can we visualize music? That’s what I want to explore with my new project CLOSE, where we’re using cameras and live video feeds to give the audience an idea of what’s going on up there. I was really inspired by watching bands where you get this great visual correlation to the music you’re hearing. But with DJing, it’s different, so there has to be something else that connects people to what’s happening.

You’re sort of demystifying the DJ.

A bit like that, yeah! There is quite a lot of things going on up there — maybe I have a bit of a chip on my shoulder that I want to prove that. But I want to give people a moment. I want to have them feel closer. I’m just going to perform and what you’re seeing is what’s happening… And hopefully what you’re seeing and what you’re hearing is twisting your brain inside out. That’s what excited me being on the dancefloor listening to Derrick May in 1987, those moments of just not knowing what was happening but going along for the ride. That’s the moment I want to create. That’s the moment I want to live in.

Emerging Masters
Rolex is proud to support The Talks’ new interview series about the cultural leaders of the future.
Richie Hawtin continues to tour CLOSE worldwide in 2019. For updates on Richie’s sake endeavor, visit ENTER.Sake
Life