Mr. Johnson, you grew up in Chicago in the 1980s; a vibrant time for the city’s thriving music and art scenes. Does that find its way into your art?

There was such a great energy in Chicago when I was growing up. But what influenced me early on was my family. My mother was a historian, so I became really accustomed to thinking about the value of history. She made it really clear to me that the importance of history are in our “now” space, and the things that we’re going to engage with, the stories we’re going to be told now were stories that have been affected by history. I came by that honestly. My interest in race, in masculinity and historical narratives… It just makes sense to me, I never came to those things — I never had a moment.

It seems like our past inevitably influences us, even if we don’t realize it at the time.

Yeah, it’s going to influence you. I also had a real foundation with my mother having given me several books when I was young. We had a fairly substantial library in our basement, I remember being really intimidated by a lot of the book titles. The ones that really jump out at me was a book by Harold Cruse called The Crisis of the Negro Intellectual, and I remember thinking, “What is in there? What is in that book?” Knowing that there was something really loaded and complicated discourse that was taking place there, that one day I would want to find myself in.

“The autobiographical moments in my work are almost inherently political because they tell a story that is often under-told.”

Is it fair to say you eventually found yourself in the midst of that discourse?

A lot of my work and a lot of my ideas have been about talking about my experience. Not every black American’s experience is this one. That’s why the autobiographical moments in my work I feel like are almost inherently political because they tell a story that I think is often under-told about the black character’s negotiation with this kind of intellectual engagement, with their own sense of privilege, with the battle and negotiation of living in this body… How you can be a fairly privileged, middle class person but then still engaged in a discourse of how black America has to negotiate the problems that it’s facing.

That’s a complicated narrative to navigate as an artist.

I’ve often looked to the black intellectual and to the history of that discourse as a vehicle to talk about my own existence, and the effects of this country’s policies and how they could be different from how you might expect them to be. So my story is really kind of a tale of two cities — me being a north sider really kind of gives me a specific perspective on that, whereas on the south side my perspective is probably not as clean.

You’ve lived in New York for many years now. What is it like to go back to Chicago these days?

Chicago when I was young was a black city — a black and Latino city. In a lot of ways, I miss the city that I knew as a young man. The majority of white people that I knew were more suburban people, and now Wicker Park is completely gentrified. It often starts with that one bar occupied by ‘new people,’ you know? Then there’s a coffee shop, a bookstore, a record store… I don’t think it’s people’s intentions to come in and change things but they feel like pioneers, not dissimilar from Columbus landing in America, acting as if he found it, as if there weren’t people there already. (Laughs) 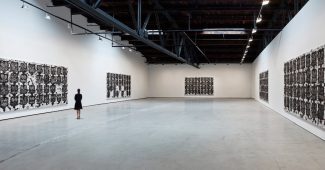 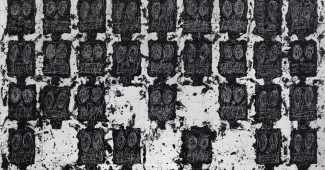 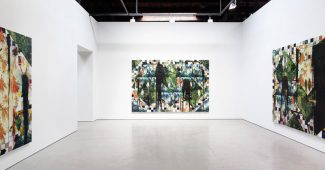 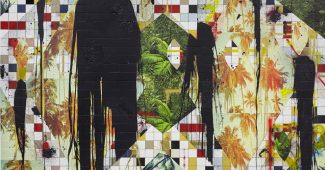 Is that what you experienced as well when you first moved to New York?

Absolutely, when I eventually got a space in Bushwick, Brooklyn, I was the bad guy! I was bringing the coffee shop, I wanted the bookstore… (Laughs) For some reason when I first got to New York I wanted to be in Manhattan. I’d grown up watching Woody Allen movies, you know? Of course, I loved Brooklyn because of Spike Lee, but the romance of Manhattan… So, we lived in shoebox for seven years, I mean the smallest apartment on the planet but I needed to be in the city. If you think about these historical figures and artists I was so interested in, they were all Manhattan artists — they were living in a different Manhattan though. (Laughs) I was in their basement.

And I was living in more of like a Disney World space that was built for tourists to freely walk the streets without any inhibition. I was totally cognizant of the different experiences that we were having, but I still was dead set on having that experience to some degree.

Did that influence your art in the same way your childhood in Chicago did?

I think it did, absolutely. The kinds of spaces that I was working in, you know, a basement in Chinatown with seven foot ceilings and zero windows — the negotiation was that I had to allow the belly dancers that danced in the restaurant to change in my studio. (Laughs) You can’t help but be influenced by that! The diversity of the city, black, Chinese — every kind of person is here every single day; crazy, sane, rich, poor, and there’s something about that energy that I needed. Chicago and New York have some things in common, so I didn’t necessarily need to trade what I was getting in Chicago for what I would get in Brooklyn — it was more romantic than it was practical, my investment. 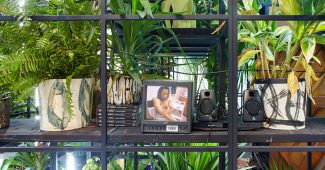 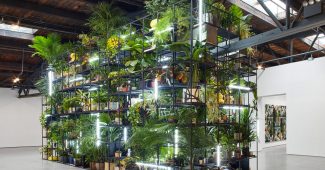 Pop culture also seems to be a strong influence for you. Was it mostly books and films that were inspiring you?

Growing up, it was the music, the style, it was what you saw, what you read, what you looked at, the vernacular that influenced you the most. I carried that, it was so important to me. When you turn 18, you stop thinking that the museum is boring and you actually get really invested in what’s there. Seeing Richard Tuttle put a small piece of cloth on the wall, I thought to myself, “There’s two kinds of people in this world, the type of people who see Richard Tuttle put a piece of cloth on the wall and both of them say, ‘I can do this.’ But one of them says, ‘I can do this?!’ while the other one says, ‘I can do this,’ in disappointment.” (Laughs)

I’m guessing you were the former.

Right, I was like, “I can do this? This is electric, this is so exciting!” The same thing happened when I came across the work of David Hammons or Paul McCarthy or Franz Kline, Clyfford Still, it was always, “I can’t believe I can do this.”

That’s one of the greatest things that art can do is impart the idea that the world is open and you can steer it in your own direction.

Right, “There’s space for me, you have a space for my voice.” You think I can do that, I can do this other thing and we should all be able to find some acceptance in that. I think that that kind of optimism led me to really feeling such a strong influence from artists — the seriousness of it, the humor of it, the possibility of it, and the endless opportunities that I thought were in the arts started to really take over for me, and just the joy and excitement of the new.

Douglas Gordon: “You pull yourself up and you push it out”

Liza Lou: “Survival is at the core of it”