Rachel Whiteread's Gagosian Artist Spotlight is live from 21-27 October 2020.
Emerging Masters
Rolex is proud to support The Talks’ new interview series about the cultural leaders of the future.

Ms. Whiteread, do you think all good art should invite us to view the world differently?

I think all good art can be a commentary on the world as it is. I think if it can do that, if it can make people think, then it's really done its job. And even if it takes someone a long, long time to understand something… The best writing, the best music is not necessarily something that you come across and understand quickly; things can be very difficult or hard to look at, they can be complex and ugly. And those things are extremely important. That is what art and culture is there for.

Is that why your work represents the real world around you rather than something more abstract or fantastical?

I think I've always worked using things that have appealed to my domestic sensibility in a way. And that may sound quite strange, but it has to do with wanting to be kind of grounded, and feel my feet on the ground, literally. Simple as that. I don't like fantasy movies very much, I don't really read fantasy books, I’m not into Sci-Fi or anything like that … So the narrative of my work is really born from what everyone experiences every day, the psychological process, politics, all of those things.

Contemporary art can sometimes be a bit tricky for people to understand; perhaps the inclusion of something more familiar — like the hot water bottles or cardboard boxes or doors we often find in your work — can also be comforting for the viewer.

Yes, I think that's exactly it. It touches a nerve as the objects are very familiar but they're slightly removed, as well. It gives people a moment to pause and try to work out what they are and why they're like that. Art can be so many things for so many different people. But for me, that's probably the main thing that people find rewarding in looking at my work. It feels familiar and almost like a family member.

“My oeuvre stems from that, that idea of interpreting something in a slightly different way and elevating the mundanity of it.”

Sarah Sze, who also uses everyday objects in her art, says that using mundane objects gives them a new life and imparts on them new value.

Absolutely, yes. I always talk about the first thing that I ever cast, which was a spoon that I pressed into sand, it made an impression in the sand and I poured in some hot metal to make this object that was like a spoon, but it wasn't a spoon at all. It lost its “spoonness,” it lost the indentation. And I think my oeuvre stems from that, that idea of interpreting something in a slightly different way and elevating the mundanity of it.

Apparently you considered that process a kind of “hallelujah moment” for your life as an artist because you realized you could change everyday objects using very simple acts. What was it about simplicity in that context that was intriguing for you?

It was like an accident when I did it, I didn't really know what was going to happen. I was very young, I was probably 19, and it was just a real moment of: “Wow, you could do that, and that happens!” And I think what I'm trying to say is the language of an artist starts with baby steps. I think as you grow older — because that moment with the spoon was 15 odd years ago — I feel very akin to exactly that same feeling with the work. It's one of the hardest things as an artist to do is to have a lightness of touch, to stroke something, and it turns into something else. It’s like being a magician, it's a very hard thing to do. But it can be incredibly peaceful and poetic, and all sorts of other things. It's what I strive to do.

Your process for making Ghost, a largescale cast of the interior of a Victorian room that you made in 1990, took something like 50 days of plastering and cutting. How do you reconcile that long and arduous process with your love of the simple technique we just spoke about?

Actually, that was only a few years after having made the spoon, but yes, a piece like Ghost uses a very different process. It harks back to different times in history, but it's all about humankind: where we've lived, what we've done, how we've communicated with our spaces and places that we've been in… My work is a language and the language develops. There are quiet little words in my language, but there’s also very long complex words. So it's a process of marrying those things together to make them whole, and whether that becomes a resin piece or an incredibly complex work that might be in the Gagosian show that’s coming up, it’s all part of the same thing. And I think in that way, I'm very lucky to have have built my career around that: that I can let anything happen. 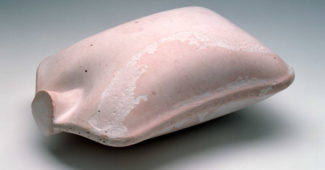 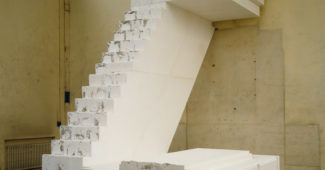 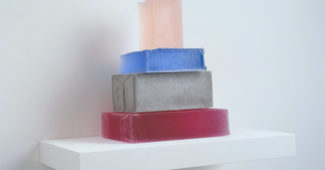 You’ve worked with everything from resin to rubber to plaster and even concrete. How do you choose which material to work with — or does the choice simply come to you through the process of letting things happen?

which is quite an early work of mine, those pieces were cast in resin from the spaces underneath chairs. I’ve made others in stone and in concrete and in plaster, but those particular pieces were made using different types of resins. The different agents which make the resin set are catalysts, and by doing this mix and match process I was able to control the colours. There’s no added colour at all, it simply comes from the raw material and the catalysts. I used concrete a lot initially, there was something very beautiful about it and how it could pick up all the detail. But as time went on, I decided to try a new material where you could look into it, beyond the surface of it. I couldn’t use glass because I had very limited resources, but I worked with what I could.

You first became interested in casting objects’ negative space in college, but what exactly drew you to these void spaces?

It wasn't really about negative space, that's something that's happened by the by. It was more about trying to explore interiors, to get inside and understand the psychology of objects, whether that's a matchbox, wardrobe, piece of furniture, a room or a house! It’s about understanding the sort of nitty gritty of its interior. I think it's just what I've always done, it's what I do. I can't ever look at something superficially.

You often talk about how all objects have a soul which you then try to bring out through your work.

Yes but I don’t mean it quite so literally. I think an object has an essence of whatever it's been used for. So for example, very early on in my career, the tables that I cast, they were always secondhand tables, they’d come from thrift stores or charity shops and you'd find all sorts of stuff embedded on the surface of the table. Everything from kids’ nose pickings to chewing gum to secret messages that someone had written that would then get embossed on the surface of the sculpture. So it's just about how we interact with the world, you know, and if I can somehow pull that out and put it in the sculpture, it makes me happy.

Have you ever used your own furniture or objects that belong to you for a cast, something which would then have an even more present soul or emotional connection?

I have done, yes, more so when I was a student, but I did use things that were completely connected to myself or my family, things that have some sort of memory. For instance, I made an enormous piece inside the Tate Modern’s Turbine Hall and that stemmed from a cardboard box that we had when I was a child, which I found again when we cleared up my mom's house after she passed away.

What about the challenges of making pieces that have an external emotional connection, like the Nameless Library sculpture you created as a Holocaust memorial piece in Vienna’s Judenplatz?

What’s more challenging is the enormous political upheaval that those type of things cause. The emotion, the energy from everybody else… It is an enormous amount of pressure, actually, and I don't think people realize quite how much or how difficult these things can be sometimes. I never take them on lightly. I want to be very thoughtful about how something is made. And I think as artists, we have an enormous responsibility for helping to interpret the world and placing our commentary out there in the public eye.

Is that why you’ve started creating sculptures that are more hidden away or erected in remote locations?

This series of “Shy Sculptures” as I call them is something that started with the idea of making buildings all over the world. It’s really about trying to make something in a very quiet way, to work with different types of buildings wherever it may be in the world, and to memorialize those buildings, those people, the place. It's something that I constantly think about. I love this idea of making things in places where people would rarely see them — for me, what’s so important is that they exist, and that someone might see it at some point.

Emerging Masters
Rolex is proud to support The Talks’ new interview series about the cultural leaders of the future.
Rachel Whiteread's Gagosian Artist Spotlight is live from 21-27 October 2020.
Related Interviews

Sarah Sze: “How do we breathe life into objects?”