And you are speaking from experience. Despite having two Michelin-starred restaurants in the early ’90s, you soon declared bankruptcy and had to close both.

That was a deeply moving moment in my life. It closed an important chapter of my young life – the rough draft was done – and once I restarted I approached it like I was finally going to write the real book. I used that experience to produce my truth, my culinary truth. I had reached maturity.

It must have worked. You currently operate 12 restaurants in 9 different countries and many of them have two or three Michelin stars each. What lesson did you take away from that experience?

The lesson in this case is that cooking is a business. It can’t just be about having your name mentioned in the papers, it’s not enough. The artistry of it is not enough. We talk a lot about the art of it, the artist, but I have so much respect for the guys who are making this a business. Those are the real heroes. The businessmen who are creating jobs and opportunity, those people interest me even more than the artists.

What makes a chef an artist?

An artist is someone who has a vision that is different from everyone else’s. He’s able to understand that the smallest detail can change everything – whether that’s in painting or writing or what have you. For example, there are journalists and there are writers. They are not the same thing. A journalist writes down the facts. The difference is in the perspective; it’s completely different. An artist has a completely different relationship with the universe. Ferran Adrià. He’s an artist. But there’s very few! It is rare. There are very few real artists.

Are you an artist?

Well, it’s not really my problem. I don’t concern myself with whether or not I’m an artist. I know what I am, I know how I work, I know my weaknesses and my strengths. It’s not my job to analyze which category I’m in. It was never my goal to earn Michelin stars. I love food. Simple as that. This project is a project of emotions that I’m trying to infuse in every plate by cooking with quality, affection, love, integrity, honesty. The stars are a consequence of who I am, what I do, and how I do it.

Do you feel challenged by your Michelin stars?

Definitely. Of course. They encourage a discussion about my food. We are all a direct reflection of our stars! It holds us to a certain standard, and we’re forced to live up to it and that is certainly a challenge. The existence of Michelin in certain towns and cities breeds energy, it gives people incentive to work harder. Competition makes people want to work! We want the gold medal, you know?

Do you remember when you first became passionate about cooking? 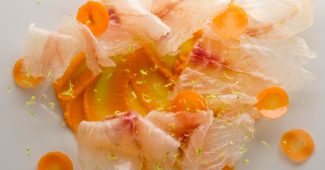 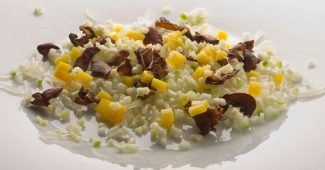 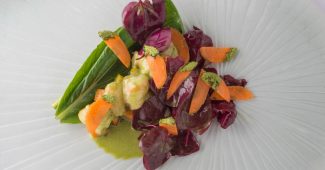 Food can be very emotional. Chef Homaro Cantu once said, “Most of us have fond memories of food from our childhood. Whether it was our mom’s homemade lasagna or a memorable chocolate birthday cake, food has a way of transporting us back to the past.” Which food transports you to the past?

For me it’s a certain chocolate biscotti that my grandmother used to make. It makes me think of vacationing at my grandmother’s house in the country, in an area that was very rural and calm. It’s very much tied to thoughts of family.

Do you think it’s possible for one’s judgment of something like that to ever truly be separated from the memories and emotions we associate with it?

There’s always that deception, you’re right. Yesterday, for example, I tasted this little hazelnut candy made by this chocolate company that I loved when I was younger. It was some kind of nougat thing and I remember when I was a kid I loved it. It was such a treat! Yesterday, I tried it again and I just found it too sweet, too heavy, and all around not very good. (Laughs) My body has evolved, I guess. I used to drink nothing but sparkling water, too, and now I have one glass and I don’t feel well. The body evolves, and our metabolism evolves. It’s normal.

Ah, well there’s a lot of weird stuff in China. But the most bizarre thing I’ve ever eaten is… the front right paw of a bear. Bears apparently sleep on their right foot, so it’s much more tender and silky than the others.

I didn’t notice whether it was tender or not – it didn’t taste very good! But tradition says that the front right paw is the most supple. It was in Russia. It’s strange, but no more strange than eating an ostrich or a pig, or what have you.

People say that you are constantly breaking the conventions of traditional French cuisine. Do you believe rules were made to be broken?

Breaking rules is done very instinctually, naturally, over time. I like to make progress, I like to try new things, to move forward. But the goal of breaking rules? I don’t need that.

With restaurants around the world, do you have to be very strict with your employees in order to make sure your vision is realized?

(Laughs) No. I don’t think so. This business is not a joke, of course, but ruling with an iron fist doesn’t accomplish anything. Iron hurts! I’m a defender of kindness. Brutality doesn’t last. That kind of behavior doesn’t work as well as trust.

So how do you maintain order in your kitchens from afar?

By being professional, fair, and kind. And attentive. Gordon Ramsey, that’s just television. It’s nonsense. We can’t terrorize our staff! We can scare them, but to terrorize them constantly? That does nothing. Conviction is important. Very important.

Has the food industry changed a lot in recent years?

Yes. Yes. You used a word that hasn’t existed in this context until recently: the cooking “industry.” With the contracts, the television shows, the cookbooks, the cookware, pots and pans, clothing lines, fridges – du jambon, quoi!(Laughs) It goes on… But at the same time it’s not exclusive to cooking. The idea of fashion, Dior, Tom Ford… Tom Ford is not actually creating anything! It’s business. It’s nothing but business. And today, we’re obsessed with the look, the superficial. And gastronomy has gotten swept up in that. It creates jobs, it creates opportunity but… we need silence.

Certain chefs that are just part of their restaurant’s image, they are just the face of the company. Do you still work in your own kitchens, are you actually on the line cooking?

Yes, of course! I hope I never become that kind of chef.

Ana Roš: “It has to do with our own personality”

Eric Ripert: “Anger is a weakness”