Mr. Souza, after having spent eight years as the official photographer for President Barack Obama, do you miss the White House?

Apparently Obama said, “We used to live there,” as he was overlooking the White House from the helicopter on the last day of his presidency. What was the atmosphere during that day?

It was sentimental. The picture you mention is of him flying in the helicopter to the Andrews Air Force Base. The tradition is the outgoing president gets to use Air Force One one last time, and I went on the plane with them. It was a relief in some ways, that eight years of hard work, and being under the microscope for him was ending. But there was also a sense of, I guess, disappointment, maybe? That the person that succeeded him was not the person we thought would be succeeding him.

“I’m proud despite never being satisfied, but I think every good photographer probably feels that way.”

You have witnessed this presidential transition up close before, as you were also the official photographer for Ronald Reagan in the eighties. How does it feel to look back at those photos?

That was a long time ago! (Laughs) I think I was a very young photographer back then and President Reagan was in his seventies — so he was almost like a grandfather figure. I mean, he was not as energetic as President Obama and much more formal in the way that he dressed and acted — that’s just the way he was. But there’s still a few pictures from his administration that I’m proud of despite never being satisfied, but I think every good photographer probably feels that way.

Did those experiences give a better idea of what you were getting yourself into when you came back to the White House in 2009?

Well, I certainly sort of knew the way you should do things — and I knew the White House pretty well! I was not going to be intimidated by powerful people, because I had much more confidence in myself in what I was about to do, than I had with President Reagan. I think, if anything, the experience with President Reagan made me a better White House photographer for President Obama. Before, I had some preconceived ideas based on the work that I had seen from other White House photographers. For example, the thing that I admired about Yoichi Okamoto, the official photographer who served President Lyndon B. Johnson in the 1960s, was that he was really the first one to truly document everything that a president did. So with president Obama, I was trying to follow Okamoto’s way of being there for everything that happened. 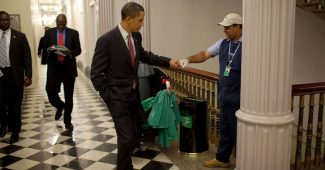 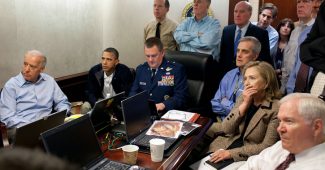 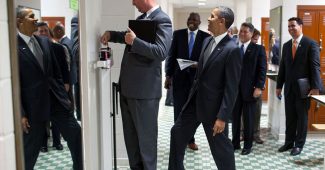 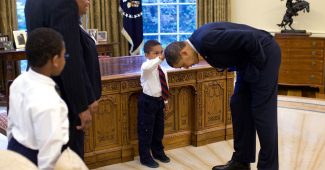 Well, yes, but for instance John Kennedy, a president that I grew up with, despite being so photogenic and there being a lot of classic photos of him, did not have a White House photographer, so it was hit or miss! Whereas hopefully, when you look at my body of work from these past eight years of Obama, you get a really good sense of the kind of person he was. I tried to present some of the challenges that were put forth in front of him, but actually, the main is showing the little moments, the interactions that he had with people from all different walks of life.

And these photos were often released in real time to the public, like the one of Obama fist-bumping a custodian in the Eisenhower Executive Office Building, or the one of him bowing to five-year-old kid who wanted to touch his hair.

Right, it just so happened that during President Obama’s presidency, social media exploded and I just happened to be the White House photographer at the time. So, as a result, it was only natural that, just like Eisenhower and Kennedy did with television, the Obama administration made use of these social media tools, giving people almost a real-time look inside his presidency in a way that no one had done before. It’s definitely a difficult job — both physically, because of the number of hours you work and the tremendous amount of travel, and mentally too! Because you’re doing it every day, all day, and it sort of wears you down.

Yeah, patience is one of the most difficult things! Not every day was an exciting day. I have this expression, “Some days it was like watching paint dry.” And yet, because he was the President of the United States, anything that happens in the world somehow affects him and you don’t know when those things are going to happen, which is why I always wanted to be there.

“You just never knew, and I didn’t want to miss anything.”

Because you can’t anticipate critical moments, you can’t afford to skip an event just because it might be boring… You never know what might happen.

Exactly, you just never knew, and I didn’t want to miss anything. For example, during the Osama bin Laden raid in 2011, we were in that room for over 40 minutes. It was very quiet. So I was trying to be very quiet with my camera and not use a motor drive… It was a very intense and anxious moment and I was obviously aware of how historic this day was. But what I didn’t know, and what they didn’t know, was the outcome. There was no guarantee that Bin Laden would be there, there was no guarantee they were going to find him, or that no one was going to get hurt or killed. And I think that’s why you can see this look on their faces. Imagine you’ve made a decision to put these guys in harm’s way and now there’s nothing you can do to help them — you’re just there to observe.

That seems to be a crucial part of being a successful photojournalist. What have you learnt from all these years of observation?

Well, the experience of having watched the President up close for years, certainly is going to impact how I photograph things and what I chose to photograph. One of the things that I’m a little concerned about is that I’ve become better known; I’m a little concerned about people reacting to me in a different way because of that. But meanwhile, I am in the process of putting together an exhibit called “Two Presidents,” which is going to be half of the pictures of Obama and half of Reagan.No matter what you thought of either of their politics, I think everyone will say they were both decent human beings. And I’m hoping the exhibit draws a contrast to, you know, what we’re experiencing right now — in a somewhat subtle way.