Mr. Scheeren, what experiences would you say changed your understanding of the world?

I think when you grow up in Europe, almost no matter where, you have a very sheltered idea of how things are. So going backpacking through China 25 years ago really confronted me with a reality that was unimaginable. Simply the amount of people around you, a completely different definition of personal space, of how things would work, of how people live... The main reason to go was that I knew nothing about the world, and China seemed the most impenetrable. Somehow that trip was a discovery of a reality that I had no idea about before. It was quite a transformative moment for me because it liberated me.

Liberated you from what?

It showed me that things could be dramatically different but maybe equally valid or equally interesting. For instance, I think that the power in China was not in holding on to its past in the way that other developed nations do, it was in the complete focus on the future. There was very little sentimental baggage. It was simply a search for how to progress. That experience was very raw, you could feel this incredible energy somehow in that country. People were hungry for things to happen, people were interested in what the future could be.

“That strong sense of courageousness was a very exciting context for an architect to engage with.”

Ma Yansong says architects should involve the public more when envisioning the future of urban planning.

Well, that strong sense of courageousness, that strong sense of demand, or exploration, was a very exciting context for an architect to engage with. It wasn’t just about how could we stick to what we already know but how can we rethink things for which there are no particular models. For example, in China, someone came to us and said, “We want to build a bookshop that is 100,000 square-meters large.” And you go, “What do you mean? Not even a public library is that size!” But then you visit an existing bookstore in Seoul that is half that size and it’s completely full of people. You see that energy and that density and you think, “Of course you can double it!” But at first it sounds like a completely implausible idea.

True. What is important is to not simply succumb to the generic production of quantity and built mass, but to really ask how could we develop models out of this inevitable density, that are much more valuable towards us as human beings — towards a question of how we want to live, what is the quality of our life, and how do we want to exist in a city that grows extensively. I think we’ve been quite successful in finding clients that were ultimately willing to engage in these dialogues to see how we can break the mold, how we can, in a very literal way, open the skyscraper up to the life of people. 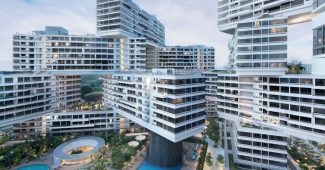 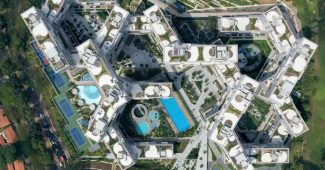 Exactly, the Interlace was a redefinition of a building as something that was no longer just an object, but a connective tissue that would form a huge community. The way the building blocks are stacked up forms huge gardens and courtyards, so it was about defining the space to live in that would allow you an incredible degree of freedom to decide for yourself. I think that’s what ultimately makes for an incredible quality of life in that place. Another example is the Sky Forest project in Ho Chi Minh City, Vietnam. For that, we imagined the nature that you could soak up in the middle of a very dense, emerging part of the city.

Have you ever been surprised by how people inhabited your buildings?

In a way, that’s the best thing that can happen, when people are inspired enough to make their own story out of it. It’s not that they have to live your story — I think that would be a rather oppressive scenario. Architecture should never be too prescriptive in terms of telling you what to do. I think it’s actually brilliant when people find ways to reinterpret the spaces we create. For example, by complete coincidence I found on the Internet a girl living at the Interlace who had posted a series of “My Life at the Interlace” videos, where she rollerblades throughout the complex — that was really a great moment. We couldn’t have scripted anything as good as that.

Or the local newlyweds who took their wedding photos in front of your CCTV Headquarters skyscraper in Beijing!

Can you imagine living in your developments?

Yes but I think what is important is that as an architect, you don’t work for yourself; you do not do these things because they are a direct reflection of your own needs or satisfaction. I build these buildings for everyone who will live in them. Of course they are driven by a belief that I have in ideas of how to improve living. And that goes back to what we just said, to a certain openness that these buildings are given to people and they become their own buildings.

Is that openness something you hope to introduce in Western architecture?

The West always used to be the example but I think Asia has recently produced a series of radical examples of how skyscrapers can be different and my company and I were part of that movement. In my own story, I wonder if now is the moment to look back to Europe and the United States and see if we could also make radical shifts there?

You have already started a high rise project in Frankfurt, right?

Yes, although it’s very different to Asia, where you are usually confronted with mostly tabula rasa scenarios. Europe has so much existing substance, but most of it is no longer really adequate nowadays. In Frankfurt, we just commenced a project that is an adaptive re-use of an old, hermetic office building from the 1970s, into a very open, light residential space. I believe that space has a very important psychological effect and I want to make spaces that hopefully make people happier in certain ways. Of course, architecture is only architecture — one can never and should never overestimate the abilities that anyone or anything has, but at the same time I think we also need to be explicitly optimistic in our work. We have to believe in the possibility to make things better.