Mr. Eliasson, what is more important for art, the idea or the execution?

I think the talent of an artist very often and surprisingly does not lay in, “What was the idea and what artwork came out of it?” But the success of translating an idea into action is very often where the talent is to be found. To have an idea is very often mistaken for having achieved something, but I think a studio like this is all about the space between the idea and the outcome. If you can give a body to the idea, not just an architectural body but a body with blood and air and space in it, then I think you are onto a very interesting process.

Where does the process begin for you?

When having an idea, I very often ask, “Where did I get this idea from? From what emotional landscape or intuitive path did this idea take its origin?” Sometimes an idea comes out of a great experience, but it could also be from a trauma, something that you don’t necessarily want to deal with. But dealing with it might amplify the idea and indicate the direction that ideas should take in order to get shaped and take a body.

So you let the idea take whatever form it wants?

Exactly. And as with anything else, there are good ideas and there are bad ideas. And the bad ideas, they are often so narcissistic and so egoistic that they kind of rule themselves out or they kind of grow into teenage-hood and they’re abandoned. Whereas the better ideas, they seem to grow! Taking an idea into action is taking it through maybe a thousand steps. 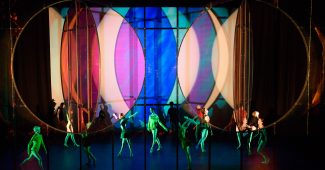 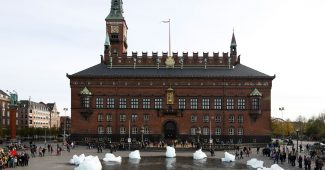 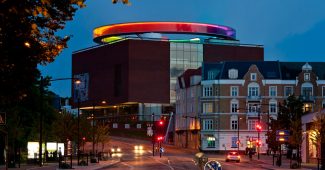 Some of them are tiny, subconscious, instantly made steps – but they are still real decisions. They are decisions that are invisible to the McKinsey segment that runs our country.But what makes these steps creative is not the choice between two colors, two materials, the size of something, it is the consequences that the choice has on the world. Very often creativity is actually not in the studio, but it is in how the studio influences the world around it. Once a work of art is done, it is out in the world, on the street, in a museum, in a gallery somewhere. It could be a building, a situation, or a theater play. The potential of the studio lays in this creative exchange, in how we shape the world and how we are shaped by the world.

You have 90 people working in your studio here in Berlin. What do they all do?

There are three teams. One team is craftsmen, some trained craftsmen and some artists, about 25 people. Then there’s a team of researchers who are more academically trained; some in art history, some in literature and philosophy, some in theory of some sorts, some internet and programming people, some film editing, music, and sound people. And the last team is made up of architects. They develop the research further and follow it through implementation. They’re often on-site installing, hanging complex works, or handling the installation of large shows. We are building a few buildings that are, in a sense, very large sculptures and they are also handling that. So it is sort of a very wide talent team!

How do you delegate the work among so many people and still retain creative control?

There is a team of studio directors, one for each of those teams, and I tend to work with the studio directors. So I actually only work with a few people most of the time. My focus is on why we are doing things, the aesthetics, the theoretical background, and so on. I’m less involved with logistics, financing, or the relationships with commercial partners and galleries. On a good day I am only involved with the creative work. On a bad day, I have to sit and do logistics because there is a kind of tight knot that needs to be released. Of course, somehow this is not how the studio then really works. That’s just the kind of pragmatic sense of the studio.

“Things are out of hand, things are nuts, things go wrong, and we celebrate it.”

So how does it really work?

The truth is it’s more like a very organic, trust-driven machine in which a lot of effort is being put into ambiguity, into risk-taking, into creative choices, into things that seem absolutely hopeless and not worthwhile. Within our teams there is a flourishing, crazy, maniacal life where a lot of really strange stuff is going on. And we ourselves sometimes forget to appreciate it. Things are out of hand, things are nuts, things go wrong, and we celebrate it still. Sometimes when I talk about the studio I need to leave a bit of space for the unpredictable success and for the nurturing of unpredictable success, which I think we focus on a lot.

Much of modern life seems based on minimizing ambiguity and uncertainty, not celebrating it.

Right. I met with Frank Barkow of Barkow Leibinger not so long ago. He is a lovely architect from Berlin and at first we were under the impression that our studios have a similar size and type and nature. But in an architectural office ambiguity is very expensive! At the end of the day it’s very much about having confidence in the muscle that art has. I think it’s an unbelievably interesting friction in society. And I have a lot of confidence in the role that the cultural sector, and in particular the art part of that, has on the world. It’s funny because if you look at natural science, for instance, there are not a lot of papers on ambiguity, uncertainty, doubt, risk… What we do here within traditional science is still on the periphery of the attention of scientists. And this is where I see there is a great potential in what we are doing.

The idea of community seems to play a big role in your studio. Your whole office has lunch together where in-house chefs provide high quality vegetarian dishes and there even is some sort of cleaning schedule that all employees take part in.

Yeah, the kitchen is like a gas station for a car. It’s very simple. If you don’t get fuel in the car, then the car doesn’t run. So having that in mind, we decided to put the best possible energy into our people. It’s also about the social constructs that a kitchen environment allows for: this sort of momentary deconstruction of the hierarchies that are inevitably evolving in a building with 90 people in it. So the kitchen serves a sort of socio-political function in the house.

With 90 employees, several different divisions in your studio, and a seemingly endless schedule of upcoming exhibitions, how many projects do you work on at the same time?

Well, I do three or four, maybe five projects at a time. But somehow I don’t split things into different projects. They are all interconnected because they all feed each other. So, the truth, the real answer is that I actually only work on one thing at a time. Even my project Little Sun, which many people see as a deviation from my attention to art, is about using the creativity that I have in a way that I think is more interesting than a lot of art environments allow for. It’s about resources, people, access to the quality of life you want to achieve. Addressing energy access in Africa and doing a piece in a museum are surprisingly connected, especially up in my head. 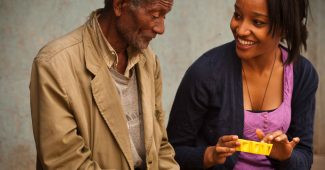 Little Sun is a project that provides solar-powered LED lamps for communities without electricity, all while creating local jobs and local profits. Do you consider Little Sun a work of art?

For me it’s an art project because my definition of art is much wider than what people normally see in museums or in galleries. Art is not the object but what the object does to the world. If it takes into account the ambiguity, the creativity, or the trust that Little Sun can generate, I think one can give it an artistic labeling.

What makes something art?

Art is something about everyday life. Art is about finding creativity in the normal gutter next to you. To see the potential in something where there is no potential in terms of how society sees it is often where art or creativity is a great tool. It’s about making the impossible possible without doing a major detour. Very often art is actually also a frame of reference in which people can identify with things that are otherwise excluded in our society. So this is why, when you ask me, “Is it art?” I say, “Yes, of course it’s art,” because my definition of art is about how to exercise hospitality beyond the narrow definition of normality that our society otherwise exercises.

Is that also why sensory experience and interaction play large roles in your work?

Yeah, that became very, let’s face it, fashionable when I was an art student… The focus on the viewer and the idea of the person experiencing a work of art being a co-producer of the work really fueled the idea of asking, “How do we create a proactive, involved, connected participant in civic society? How do we prevent people from feeling indifferent and disconnected?” You’re not consuming art – you’re producing art by experiencing it! Suddenly as a viewer you are not a passive receiver, but a proactive producer of art. I find this very interesting and it’s always been a very central force for me.

I think the physical senses are key to feeling included and engaged. If you are emotionally aroused, you are much more likely to react than if you’re intellectually stimulated. For instance, the climate debate is incredibly academic and science-driven and very hard to understand because it’s so abstract, so how do we understand it? Is it through intellect or is it through our somatic, muscular bodies? Is it through our senses?

Theater director Robert Wilson’s work functions in a similar way. His Einstein on the Beach is five hours long and he said the intention was so that “people could get lost in the situation where they were experiencing something. To experience something is a way of thinking.”

And art can offer things that go beyond what the private sector can handle themselves. For example, the unspoken justification for U.N. is being eradicated because the people who lived through the World War II are dying. I’m very interested in how on earth the U.N. is going to survive if people don’t have an emotional need to have it anymore. So who does the U.N. need to solve that riddle? Who trades in emotional needs? Emotional narrative? It’s the cultural segment. It’s music, it’s theater, it’s literature, it’s poetry. So this is why I’m so confident that being a culturally involved person, you are going to be involved with reality production from now on.

Gabriel Orozco: “I try to be disappointing”

Anish Kapoor: “I have nothing to say”