Ms. Compton, do you think that food can change the world?

I think so. Food brings people together. Everybody can relate at some level on food. There’s so many people that travel and migrate, and they end up bringing about changes to the landscape of so many places. Here in New Orleans for example, there's a huge Vietnamese population, and that's because of the shrimp boats — they're all owned by Vietnamese fishermen, and so you see a lot of that in the culinary landscape here. But you would never think that! So food culture is very influenced by people migrating and settling there and setting up shop, opening everything up, and it just takes.

And because of that, people also learn to be more open-minded.

Yes, they are more adventurous! I think people are more excited about food more than ever, and they'll just say, “Oh, I think I’ll try this.” When I was growing up, restaurants were special occasions places; if it was my dad's birthday or my mom's birthday or their anniversary, we would go out. Now people are dining out more, some people dine out every single day. People are going to their neighborhood spots or they're going to happy hour and then staying for dinner — and in that way, they're more exposed. Their options are a little more open, and people are a little more easy-going.

“It's like a soul satisfying feeling when you're eating something that just really hits your heart.”

I posted that just after Leah Chase passed away… But she was somebody who was very instrumental in Creole cuisine in New Orleans. She was part of the civil rights movement. She passed away when she was 96 and she still was in her kitchen every single day. When I got to know her and I would go to see her, I’d say, “You’ve got to go home and put your feet up.” But most of her family was in the kitchen or working in the restaurant and she’d say, you know, “This is my family, literally. And I want to be with them.” So I just really admired her for so many years, and we became friends and she was always telling me stories about growing up and how she got into the industry and the very open minded way that she thinks about things. She's still in my heart just somebody that I always continued to want to make proud.

And have you ever had that one of those life-changing meal sharing experiences that Leah Chase spoke about?

Well, I'll give you a funny story. We had a table last night — they have been regulars at both of my restaurants for a while. And when we brought out the pasta course, she's like, “This is the best thing I've ever tried.” She was almost crying. When people have a reaction like that, it just makes you feel like it's all worthwhile. And I think that's what brings people together, it's like a soul satisfying feeling when you're eating something that just really hits your heart. That’s the way to bridge the gap.

Was that love of coming together and sharing a meal something that was instilled in you by your parents?

Yeah! Growing up in Saint Lucia, my family was very, very close and whether it was a birthday or just a Sunday, it was all the centered around sitting down and having a meal and just talking. And I think the older that I got, the more I appreciated those things. They really resonate with me. 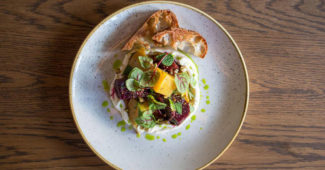 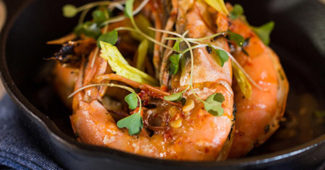 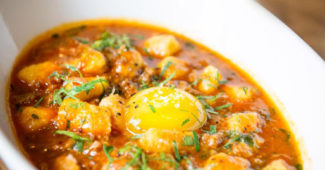 Those family meal traditions are also very prominent in the American south, where you live now, right?

Right, living here in the south, it is really a celebration of food. People call it soul food for a reason — it nourishes your soul! Family gatherings are a regular thing here too, whether it's a barbecue or something else that's coming together and cooking food. There’s also this sense of pride… Your food needs to be the best, or people talk about, you know, “My mom’s jumbo is the best.” It’s a beautiful kind of pride because people spend hours cooking and then hours of time together eating.

A few years ago you commented that the dining scene is changing because people don’t have time to do three or four hour long dinners anymore. Is that disappointing for you as a chef?

It doesn’t make me sad, no, but I think the emphasis on cuisine now is more that people don’t necessarily have the time to have those long meals on a regular basis. So for me, when you come to eat at my restaurant, I have at most an hour and a half to two hours with you so I have to make sure that every bite is the best bite. There’s no room for, like, “Well, I’ll catch up on the dessert.” We have to be constantly present because it’s a shorter timeframe.

Is that fast pace something that you also struggle to keep up with?

Sure, I’ve been trying for years to find a happy balance between work and life without rushing around. In this industry, we’ve been conditioned to think you have to work 20 hours a day, six days a week. I think that’s a terrible thing, it’s an old school mentality. It’s been ingrained in upcoming chefs, but it’s like… No! You don’t need to be here for that just to be the hero, it’s not a sign of leadership. The simple thing of coming to work and being energized and saying, “Today we’re going to do this,” instead of coming in like, “Oh God, I’m here again and I only got four hours of sleep.” You know what I mean? It takes a toll on people.

Are you trying to foster a slower environment in your restaurants?

Yeah, especially coming out of this pandemic. When we first closed, I didn’t know what to do, I didn’t have my normal schedule and I did not know how to deal with that. So when we reopened, I wanted to simplify things, we wanted to slow things down a little bit. I'm not trying to make up all of the lost revenue, but rather I’m sure we do things in a way that we can last for the long term. That’s a big change that’s really important for us.

“In this industry, we’ve been conditioned to think you have to work 20 hours a day, six days a week. I think that’s a terrible thing, it’s an old school mentality.”

What other big changes are you hoping to see in the restaurant industry?

I mean, one of the things I really want to see are more women in the kitchen. I want to see more diverse restaurants — not just in the kitchen, but I'm talking as managers, everything. You know, you read in the New York Times that black women get 64 cents compared to the dollar a white man earns, and that’s not even based on credentials. We’re already getting 30 percent less off the bat. You talk about why black people in this country are disadvantaged; they’re shortchanged when they’re given a job. They’ll never have the courage to say, “You know what? I’m worth $11 an hour.” They’re just thankful to get the job. That is what people are missing.

So what can we as consumers and food lovers to do to help bring about these changes?

What it comes down to is to support black owned restaurants or businesses. There are not a lot of them, so to support them is to give them a chance. It can help them give fair wages, it can help them move up in the world. Things like that come down to the consumer. In the business itself, you can hire more diversely. I want to make a change, so when you are conscious of that… I’m trying to give, for example, black women a chance if I know they have the potential. I’m spending the time to train them, I’m giving them the tools, I’m giving them a shot because really, it’s up to me to do that. That’s the chance that we have to take as a world. We have years of damage to undo.