Ms. Nakayama, what is the most important ingredient in your kitchen?

I feel like any time something is missing anything, it’s soy sauce. It’s horrible, I could be in an Italian restaurant and eating something and it’s like, “This dish could use some soy sauce!” (Laughs)

You prefer a “less is more” kind of philosophy.

I think with food, there’s a tendency to go very cerebral. But I always go instinctive first! Complicated recipes might sound good on paper and they’re really interesting, but when you put it in your mouth, if it doesn’t taste good, it’s not a good dish. At the end of the day, you crave things, you want to eat certain things. So for me, before I give into that cerebral pole, I go with my instincts. 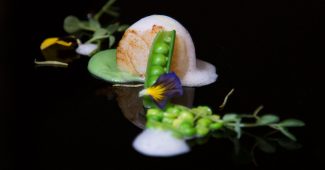 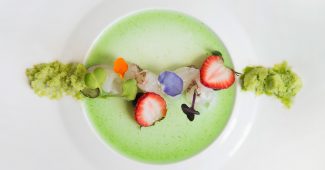 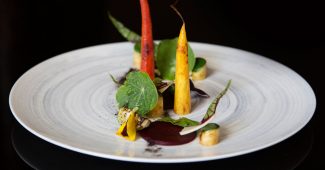 You’ve said that you used to tell yourself, “One day, when I feel ready, I’m going to start my own restaurant and be free.” Was it instinct that told you when you were ready to open your restaurant, n/naka?

I came to a point where I was spending so many hours of my life doing this work, and if I was going to continue, I really wanted it to have meaning for me. So when I really took a deeper look, it was pretty clear to me that opening something like n/naka was what I needed to do. It was time to take a leap of faith and put everything I had, financially and emotionally, into something I believed in… Whether or not it would succeed, I owed it to myself to try.

I guess there comes a time when you realize there’s no sense in waiting for the perfect moment. You just have to jump in and hope for the best.

The funny thing was, I was taking time to just do whatever I wanted and not really fully commit to anything… I had already found this great location and had been subletting it to somebody else. One day the situation changed and it was like, “They can’t continue subletting from you so you’re going to have to take it over now.” I was like, “I’m not really ready, but I think these are some universal signs that I should start getting ready.”

“I don’t think it’ll ever get easier as long as what we’re doing is something personal, something we really, really love.”

You’ve also mentioned a feeling of kuyashii — the emotion you get when you fail — as an early motivator for you. Does that continue to motivate you today?

I think any type of negative feedback can be a cause for kuyashii, like if a guest doesn’t fully enjoy or understand the concept we’re working on. The intention always comes from a good place though and we always try to see the positive in it. I try to use it to push myself to get better, but of course it stings! It takes a couple of days to get over it before you can see the silver lining.

Have your years of experience made it easier to find the silver lining?

No. I don’t think it’ll ever get easier as long as what we’re doing is something personal, something we really, really love.

n/naka seems like a very personal experience for you. Your menu is based on kaiseki, a traditional multi-course Japanese dinner. But your guests don’t actually get to choose what they eat, do they?

Right. With Azami, the sushi restaurant I owned previously, I felt that I had so much more that I wanted to express, and it became very limiting for me. With a regular restaurant, guests make it their space — and that’s great! But for me personally, I want to create a unique experience. I create custom menus for every table, so it’s a very clear statement of what I want to do.

You also keep track of what every guest eats, so that when they come back, they never have the same meal twice.

Most of our guests come back after six months or a year which is great because we’ve already developed new dishes for them to experience. But we do have guests that come back every three weeks, and that can become quite challenging! But because the kaiseki style includes many courses, it’s a bit easier to create a menu that isn’t 100% the same… Maybe there’s a dish here or there that they’ve already tried, but we always include as many new ones as we can. It creates a whole new dining experience.

“I often reach this moment when I’m cooking where I’m just singing to myself.”

How do you then balance your own identity with the traditional kaiseki style?

When I construct a menu, I can’t help but put my own experiences — growing up in the States and eating American food — in it. I might want cheese or pasta in a dish, whereas in Japan, I wouldn’t. It’s natural for us to veer away from the 100% traditional and to modernize it in a way that is familiar. The last question we ask ourselves is does it still taste Japanese? I try not to forget that. When I think of the best compliment that I can get, it’s when guests come and say, “I can see that it’s different from Japanese food but at the core, it tastes like a Japanese person made it.” We always add our personal touches to give the dish its own identity.

How did you learn the specifics of Japanese cooking? I’m sure they don’t teach you those skills in culinary school.

My time spent in Japan was very crucial in that respect. In Japanese cooking, you have to take a lot of time to master each skill in order to move on to the next level. There’s a mind to truly train you, to see how far you can be pushed before you break. In Japan, anyone who reaches a certain culinary level has suffered a great deal to get there. This kind of mentality brings you to a level of ease that you just couldn’t achieve otherwise. I often reach this moment when I’m cooking where I’m just singing to myself.

You make it sound very easy.

(Laughs) Getting to that feeling is only after the 100th hour, though! The focus is just on the work and my mind is completely clear. It’s music in my head. My body knows it, my mind knows it, everything about me knows it.

Do you reach that point every time you cook?

Certain dishes allow me to get to that point because I’ve made them so many times, while others require more of my attention. It varies. For me, the goal is to reach that point where I’m not necessarily completely present. It’s a flow. And that’s what’s so enjoyable to get to in any work: to reach flow.