Mr. Rock, do you think you would have become one of rock ’n roll’s quintessential photographers if your name had been Michael Smith?

How did you get to Michael Smith?

I just chose a common last name. I had initially planned to say Michael House to refer to a different music genre, but I figured Smith was easier to understand.

And one of them says Michael Smith?

I know, it sounds like I’m jerking you off just for the hell of it! We don’t even cover that in the documentary about me. But yes, my mother, she had an unhappy marriage and she had an affair with an American airman in the late forties, early fifties. I popped up, you know, whoopee! Here I am! The fuck are you going to do with me? Finally he had to go back to America. My first birth certificate says Michael Edward — Edward was my mother’s first husband — Chester Smith. I can’t believe you just said that.

“You can only ride your bike, you can’t dictate how the bike is built.”

For all I know I could have been an accountant or… I don’t know what I would have been, I haven’t got a fucking clue. But how these things happen, why they happen… I guess you can only ride your bike, you can’t dictate how the bike is built.

I’m sure your name gave you a certain advantage when being introduced to people like David Bowie or Iggy Pop.

Well, It gets a laugh anyway, I’ll tell you that. When I was born, though, it wouldn’t have meant anything, really because rock only really became relevant later on in the sixties and seventies. Lou Reed, when I first met him, he said to me, “I know your real name is Rockberger and you’re a nice Jewish boy from Long Island.” Of course I wasn’t, but he was! But my work is not just Lou, David Bowie, Freddie Mercury and Syd Barrett…

But you have been stamped with that sensibility. You’re known as “The Man Who Shot the Seventies.”

I blame the name!

You once said that when you’re shooting a portrait, it’s not the subject’s soul you want; it’s their aura. Why?

A soul is a little more difficult to get out. People’s souls are very mysterious — but the aura is not. I want that certain kind of mystical energy. Especially nowadays, to direct the session myself, whatever it is that I do that I can build the energy. And then the aura will pop. And that's more interesting from a visual point of view. 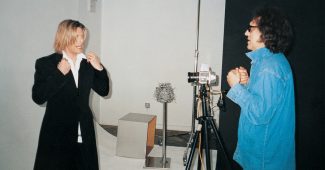 How do you pop it?

By squeezing it! It’s like squeezing somebody’s balls, if you squeeze them long enough, they’ll scream and that pops the aura. (Laughs) When I was younger my mother used to say to me, “You know, Michael you’re a hell of a tease.” And I suppose that bled over to when I started to take photographs, I’m very playful, very open-minded, very aware of the way people move, the way the look, their expressions or angles… After a while it's almost as if the pictures take themselves. That's when the magic starts to happen. It's not complicated. In fact, you’ll notice that my most famous pictures are very simple. You’re not going to find lot of props in them, it’ll all be done by lighting, attitude, angle, energy and focus. These are all the important things for me.

Have you ever thought about your own aura?

Well, in life it’s about opening yourself up. It’s about tapping in to your instincts and your energies. I think I got very good at that, you know, you just give your subject a peek at yourself here and there. I’ll feed you little bits and pieces. I have to be open and I have to be open to the possibilities, open to other people, open to my subjects, you know? I have to give them the sense that I’m there in the room with them and I’m not just a predator. I’m not there just to grab a picture and run. I think it also helps that before every session, I do a headstand and a yoga workout.

To clear my head and empty myself out! Yoga makes you want to be clean. I am addicted to yoga, definitely, and 10-minute headstands every day. These days, my drugs of choice are yoga, massage, chiropractic, acupuncture, chanting, meditation… I get all of that with regularity, depending on the day I get high all the time!

I can’t imagine that was true during your heavier, drug-fueled years.

Actually, it was! I’d do yoga and drugs because then I’m open to all kinds of possibilities! It’s funny, Lou Reed once wrote a poem about it, this was around 1976. He called me a limey shutterbug who stands on his head and does cocaine. I just loved to experience. That’s my excuse, anyway!

“In my age it’s better to be a bit more boring because I’ll live a little bit longer.”

I’m sure the constant company of rock stars helped you to experience a lot.

True, I hung around with a lot of naughty boys but I never drank even in all my years of cocaine madness, I never drank, I never did heroin. I'd seen friends die from heroin when I was 19… And that was it. Experimentation is one thing; death is something else. I was never self-destructive; I wasn’t looking to die ever even though I got really close to it. I was just experimental — in fact, I came to photography when I experimented with LSD. I started taking photos during an acid trip… It turns out there was no film in the camera!

Are you still so experimental these days?

No. I mean, I smoke a little pot, that’s about it. My doctors all say, “Nothing wrong with a little marijuana, mate.” Back then I was like the village idiot — but then, most of us were. Nowadays I’m older so it means I’m more boring. My wife says to me, “People think you’re really interesting, so I'm going tell them the truth that you’re a very boring person.” And there’s some truth to that! But in my age it’s better to be a bit more boring because I’ll live a little bit longer.