Mr. Comte, why did you decide to move away from fashion and portrait photography?

I hate repetition. You know how they say every nine or 10 years, you want to change locations? People get tired of their homes… Life works in cycles that way. But actually, I continue doing portraiture now more than ever.

I just don’t talk about it. The project I’m working on just isn’t revealed right away, but it will be after eight years. It is a gigantic portrait project focusing on women; it’s an attempt to really show the real essence of who we are. So there are these pictures that are all going to light up all the biggest billboards in the world on the same day at the same time. Even though there are many, many companies involved, there’s never a brand that’s shown in the images. So it’s not like I’m stopping the portraits, I’m just using different tools: they’re much larger and I want to communicate in a way that’s different. I’m not in the service business anymore!

“I have more possibilities now, I can create things the way I always wanted to.”

That must be liberating.

It’s a different approach. I have more possibilities now, I can create things the way I always wanted to. And I think maybe that’s a great thing again. I have a great team supporting in this as well, which is fantastic. The worst thing for me as a commercial photographer was being asked in every interview: “How was it working with so and so? How was Sharon Stone? How was…”

Which has nothing to do with your actual work.

I cannot hear it one more time! For me they were just people! I live in a very open house in Los Angeles, and whether they’re famous or not famous, there are always guests in our house. The table is always open for everyone, and that’s really what I really wanted to get away from… And then about three years ago, my friend Franca Sozzani told me, “Michel, fashion is dead.” She said, “I love what you do, so just do what you want to do, whatever idea you have. Do it.”

And that’s why you decided to pursue sculpture and installations rather than just photography?

She’s always in my ear! There is two parts to this presentation: the first is Light which shows at the MAXXI Museum in Rome, and the second is Black Light, White Light at the Triennale di Milano. Both shows explore the changes in our natural landscape and environments through photos and sculptures, but the second show invites the audience into a silent room filled with melting glaciers. It is basically a silent reminder that where we really have a responsibility, it’s a reminder of where we are heading… 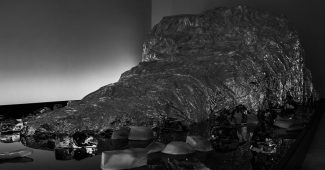 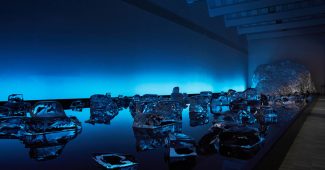 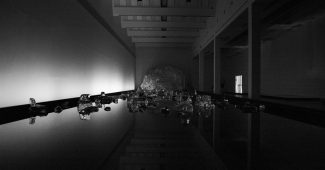 When did you first start dealing with the topic of climate change?

Before going to university, in 1975, I wrote an essay about this matter called Water Is the Oil of the Future. I was invited to present the paper at The Club of Rome in the 1970s in front of the first environmental group in the world. This is basically how this all started. And also, I was a skier and an extreme climber when I was very young. And once I went helicopter skiing in a place called Mürren, which is a very tiny village in Switzerland. Our helicopter landed and I looked down and saw the Concordiaplatz, where all the glaciers come together. It’s just so beyond beautiful! I ended up going there over and over again.

What kind of changes did you notice over the years?

I went flying over glaciers in different parts of the world, photographing and filming them… I realized that what science was writing was not right. It was written in certain articles that the glaciers are receding by 30 centimeters a year. And I observed that there was one that was receding about three kilometers a year. It’s unbelievable. The glaciers will vanish and we will have a huge water problem in about five years.

It’s said that the next wars will not be for oil, but for water.

Exactly! That’s what I really believe in. I’m also exploring the other part of global warming with an installation called The Ring of Fire: the deserts getting bigger and the heat. We can’t stop global warming, we can only slow it down so that’s why I think these projects are really very, very important right now. 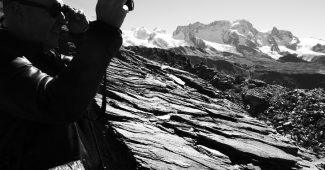 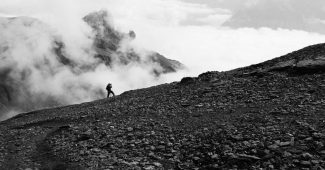 Especially when the Environmental Adviser nominated by the U.S. President is a woman with zero expertise in environmental science, who recently expressed doubts about global warming…

It’s crazy, no? I call it ignorance. Ignorance is bliss! Ignorance, ignorance, ignorance. It doesn’t snow or the snow melts down very quick… Hurricanes are getting bigger and bigger. Very soon, that area of America, Miami, that whole area will be unusable. The real estate is going to collapse. New York will be like Venice eventually… New York is going to be flooded. She should go in the room where Black Light, White Light is being shown and sit for one hour. Just sit.

Was the quietness of this project also something that appealed to you after so many years spent photographing people?

Before this project, I actually spent 12 and a half years in war zones, you know, I always lived between worlds and between extremes. I’m obsessed with nature, I always lived very close to nature, I spent my time outside… We learn from nature. We need to listen to nature. Nature is very powerful but also very fragile — and we have to really walk very, very carefully so that we don’t destroy it.