Mr. Ramos, Pablo Picasso once said “the chief enemy of creativity is good taste.” Would you agree with that?

(Laughs) Picasso is so full of shit. He was a nasty guy; he really screwed over a lot of his friends. He did some mean things to them. I suppose it’s sometimes true but not always. I'm not sure what good taste means – it changes from one person to the next. Somebody likes something that someone else doesn’t like.

What is good taste to you?

“People make references to my work as sex, which is simply not true.”

Your paintings are based on images of beautiful naked women and you’re not trying to provoke in any sort of way?

I remember a painting of yours where a naked woman is laying on the floor with an anteater facing her behind. Some people would find that a provocative image…

But there's no context.

Sure, but it paints quite the picture…

Do you still have people come and model for your paintings or do you work with photographs these days?

Yes. Not too long ago Pamela Anderson came. She wanted me to do a painting of her for commission. She came to my studio in California and I took a lot of photographs of her. I did two paintings of her and one of them was sold in a Korean art fair. The other one was supposed to be for her but she never did pay me so now it’s in Austria in my gallery in Vienna. Hopefully, he'll sell it but I was really pissed off.

When I finished the painting it was in an exhibition in New York, so I emailed Pamela and asked for an address of where it should be sent to. She emails me back saying, "Oh no I'm building a house in Malibu and the costs have gotten out of hand and I haven't got the money." I've heard that before, so to hell with it. It turns out she owes money to the contractor who built the house. She didn't pay him, she didn't pay the plumber, and she didn't pay a lot of people. But normally I have an archive of a lot of generic female bodies. 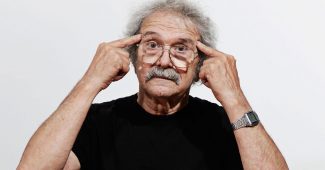 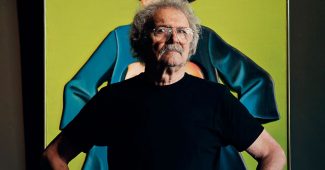 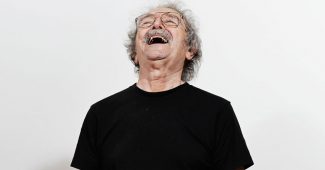 You’ve stuck with your own style for 50 years now. How big of an ego do you need for that?

I try to not let it interfere with my relationships and I don't throw it in people's faces, but I definitely have an enormous ego. People think they need to change every so often. In my case I am still pursuing the notions I have always had for the simple reason of trying to get it right. And one day I probably will but at the moment I do two good things out of ten. Hopefully before I die I can get to three or four. So my idea is just to make it better. I love going to my studio everyday and when somebody pays me a commission to do their wife, I get money to watch her take off her clothes. (Smiles)

Are you proud in a way that people have been protesting against your art for nearly fifty years?

I outlived them all. (Laughs) They were very vocal at one time but they quieted down. I think people have changed; they are more liberal and accepting these days. Judy Chicago came into a show that I was having in a San Francisco Museum, she looked at my work and started screaming at the director for showing it. You could hear yelling up and down the halls of the museum but in the end it didn’t really matter.

Some people consider it that in some way. I have a friend in California who is an artist who makes sculptures and he did some things with Indians and he called the tribal council of North Dakota and he asked, "Have you heard about this guy who..." Basically, he was promoting himself.

“Never hit on the model. It will really piss off your wife if you do.”

Should nudity be more accepted?

Sure, why not be naked in public? There are public beaches where people do that. America is the place that exists between New York and California, that's the real America. New York and California are not part of that. You have the whole Bible belt with a lot of resentfulness of nudity in public places. People make references to my work as sex, which is simply not true. Sex is an activity and nudity is a condition. When I do a painting, everybody calls them pinups. When Picasso, Modigliani, Matisse did nude paintings, people called them nudes. That’s what I want to be part of. I want to be of the group that’s called nudes not pinups. Jesus Christ.

What is the most beautiful thing about nude women?

Everything. It has to do with the concept of naturalness: that’s the way you came in and that should be the way you go out.

What part of the female body is the most important for your paintings?

The face. I always do the face first. If that doesn't work then nothing works. Another good piece of advice is to never hit on the model. It will really piss off your wife if you do. (Laughs)

How difficult is it to stay focused and professional when you have so many beautiful women posing for you in their birthday suit?

I've been doing it for so long that it has become a mechanical process for me. When I was younger it was another matter altogether. I got a little bit excited. Now I try to keep it simply business, strictly business!