Mr. Cattelan, it seems like the ultimate goal of your art is to provoke. What effect does a negative reaction have on you?

Provocations are like a Molotov cocktail. They only work one time out of ten, but when it works it can also be dangerous for the arm that is throwing it. It’s the price that has to be paid. I once had a trio of sculptures hanging from a tree in Milan that were vandalized. What I like about the public response is that it’s totally unpredictable. There’s just no way to anticipate it.

Do you ever regret works that you have made?

Every single work, at least once a day. Every morning we choose between milk or tea or coffee: usually I know what I like, but I don’t rule out changing my idea sometimes. The editing process is one of the most important parts in everyday life. The same is with my work: mistakes are part of the decision-making process.

Are you sometimes surprised with the things you are able to get away with? I mean, you built a giant middle finger out of marble and got it displayed in one of the main squares of Milan.

I wouldn’t say surprised. To me it’s something necessary, something that's missing. That is the reason why I’ve been doing it. With that sculpture the authorities approved the location and the mock-up of the sculpture without opposing. Initially it should have stayed there for just ten days. I don’t know how it happened, but they ended up asking me to donate the sculpture to the city for decades! 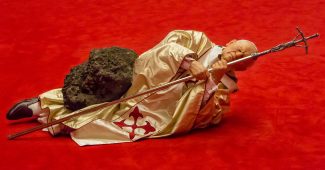 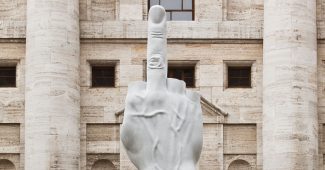 Did you have to make up some kind of backstory to get away with it?

True stories are always better than built-up bullshit and every work is connected in some way with the others. In this case a hand missing four out of five fingers was in my pocket when I met the city’s alderman of culture for the first time. It was from the mock-up of another sculpture, Ave Maria, the three arms making the fascist salute.

Would you agree that you mess with people for a living?

You are saying it, not me. To me it is a natural thing that I just keep doing, the way fish swim and birds fly. It’s something that’s done with a particular urgency: every work is the transformation of a personal emergency into a public act.

“Originality is an overrated concept, and a bit old-fashioned.”

When Peter Brant asked you to do a portrait of his wife Stephanie Seymour, you made a trophy out of her. Was that a personal emergency?

That is another good story. I went to Peter’s house because he wanted to ask me for a commissioned work. As I went inside the house, the walls were covered with hunting trophies, with every kind of animal, and I knew immediately what I would do. It was consequential to add just one more, a portrait of his beautiful wife.

Was he upset by it?

Apparently he was pleased! Rules are simply obstacles to be jumped like in a horse race, higher and higher every time. Never give an artist like me carte blanche, he would think it’s simply toilet paper.

Speaking of which, were you surprised that the fashion industry’s reaction to your magazine Toilet Paper was so positive, even though it ridicules glossy art and fashion magazines?

We felt more lucky than surprised. One of the interesting points in working with a major fashion brand like Kenzo has been that, thanks to the campaigns’ pictures, Toilet Paper images have been published everywhere, on buses, billboards, magazines. A print run like that would be impossible to achieve if you were publishing independently.

Those Kenzo images are significantly different than standard fashion campaigns. Do you feel like you have to create such unconventional images because we are constantly bombarded with visual content nowadays?

It’s a challenge. In this word crowded with fast-consumed images we are trying to produce images that last more than two seconds… and we always wonder if we're accomplishing that task. Because no alphabet is involved, images are a territory that everyone has the skills to explore, but at the same time no two people have the same sensations and experiences. It’s the reign of the subjective interpretation: we are trapped in a huge new tower of Babel, built up by the thousand of images we see everyday, and I swear it’s a lovely torture!

You’ve done magazines in the past before, too. Why do you like expressing your vision in that form?

I’m pretty sure it’s a senseless task to try to convey your idea to the audience. The secret is to show them life, and they’ll find their favorite meaning within themselves. A book, or a magazine, or a movie, they’re mirrors: they reflect, with extreme precision, who you are more than who the artist is.

How do you “show them life?”

That is something I'm still trying to figure out. But art needs to be sincere, and few people succeed in this exercise.

You once created a magazine made from pages ripped out of other magazines. Was that sincere?

Deeply inside everyone thinks of himself as different from everyone else, but even more deeply he knows that he’s just the same as the others. Originality is an overrated concept, and a bit old-fashioned, I believe. I’m kind of old school, thinking that when an artist does his work it’s no longer his…. I just see what people make of it.

Because being unique and special is an illusion we inherited from the 19th century. Meanwhile two centuries have passed and we are living in a completely different era.

What if the situation were reversed and someone used your work to make a similar statement?

Copying is a romantic declaration. I’ve never received one, but I haven’t lost hope: I’m still waiting for true love. My newsagent says, “Start copying what you love. Copy copy copy copy. At the end of the copy you will find yourself.”