Mr. Abergel, what memories have influenced your cooking the most?

For me, cooking is not so much about memory so I don’t think about it that much. I just know that I like it! But my grandmother did used to make these Cornish hens, and she would cook them in this thing that looked like a toaster from the seventies but super powerful. The way she cooked them, you could chew right through the bones and everything… I could eat a whole one to myself!

You’re now the owner of Yardbird Hong Kong, an izakaya restaurant that serves mostly chicken yakitori, so I guess your grandmother set you on the right path.

These days I can eat whatever part of the chicken I want! I love just having a small stick of the heart or the tail or the neck and things like that… But actually chicken soup is one of my favourite things. The broth is something so special. What it means, how you feel when you drink it: when you’re hungover, when you’re sick, when you’re sad… It has all these sort of remedy powers. Chicken is an everyman’s ingredient.

“The beauty of cooking is to connect with people. It’s not one of those things where you need to understand food. I want people to come and eat it; that's it!”

Do you think that familiarity is what makes it such a good thing to serve at a restaurant?

Yeah, I think so. For me, the beauty of cooking is to connect with people and to bring them together. It’s not one of those things where you need to understand food. I’m not trying to attract foodies… I want people to come and eat it; that’s it! Just relax! You don’t need to take a picture of it, it doesn’t need to be a big deal. It doesn’t need to be a special occasion… But also it could be a special occasion! That’s one of the things about chicken: it could be dinner on Tuesday or you could be having a family celebration and there’s a big roast chicken in the middle of the table, you know? It covers all the bases.

I read that your family used to have barbecues every weekend.

My parents are divorced, so that was with my dad — he lived in Israel. He has seven sisters so it would be a huge thing! The idea of cooking over fire and putting things on sticks or skewers… It makes everyone relaxed, you know? No one’s stressed out at a barbecue. It’s so chill. There’s no obligation to even come on time, it’s relaxed. Don’t worry about it!

Is that a philosophy you try to bring to Yardbird Hong Kong?

Absolutely. I think that’s a big part of it: we don’t take reservations, there’s no special treatment… But the idea of waiting to be seated is not a punishment. I wanted somewhere where you come in, you sit down, and if there’s no space, you stand up. This food works standing up! You know, we used to go to this place called Yakitori Totto — anytime we had visitors in, that’s where we would take them because it’s like, you don’t have to ask someone, “Hey, do you like chicken?” You might waste your money or be worried about the experience at a fine-dining restaurant, but with chicken and beers, it’s sort of a no-brainer.

So you don’t think of your food as an art form, for example?

No, my style of cooking is craft. There’s these guys that are just trying to express themselves and put their tears on a plate… And that to them is art. But for me, I would rather just find good ingredients.

Will Goldfarb’s philosophy is: it’s got to be delicious, it’s nice if it’s pretty, and it’s a bonus if it’s interesting.

Exactly. Like, Nobu in New York, that restaurant is a great example of communicating something to the masses in a very straightforward way: it’s fucking black cod with miso. It’s literally been around for 300 years. So, I try to take that Japanese way of thinking about food and apply it at Yardbird Hong Kong.

It seems like you prefer to let the ingredients speak for themselves.

Right, they’re going to make a good product because it’s a good product — not because I’m going to do a lot of work to it. I spent some time working under Chef Masa in New York, and he’s just incredible. The way that he looks at food and talks about it and handles it … I think just shows you so much. If we were washing rice and he found one grain of rice in the fucking sink, your day was over. You were miserable for the rest of the day because he would come behind you and chew you out! But he had this really magical touch, and as serious as he took it, he also didn’t take it very seriously: he loved eating! His whole thing was that he never wanted anything to go to waste. He loved serving people and he just wanted them to have something pure.

Your style of cooking uses every part of the bird, from head to organs to feet. Does that decision stem from your time spent with Chef Masa?

Sort of — in Japanese cooking, and especially in Cantonese food and culture, it’s good luck to have the head and feet served because it represents the beginning and the end. If you don’t get it served with the head and the feet, people are like, “Where’s the rest of it?!” (Laughs) So, we get our chickens from a market, and they’re killed the same day that they arrive in our restaurant. 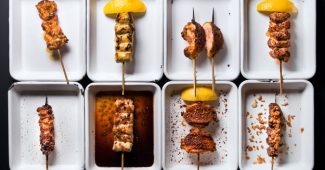 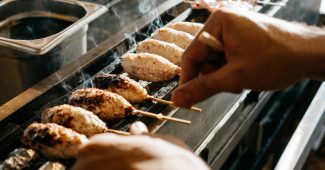 There is apparently only two hours between when the chicken is slaughtered and when it arrives at your restaurant — so it really is the freshest possible ingredient.

Definitely. The nearer the death of the animal is to when you’re eating it, the more value it has. That’s just common sense to me, you know? I’m lucky to be in Hong Kong, but anyone can get a whole chicken! Anybody can do it. In Hong Kong, each district has what’s called a wet market. Cantonese people buy for the day; they buy what they need for one day and eat it all because there is no storage in their houses. It’s the smallest apartments you’ve ever seen! Wet markets are so integral to Hong Kong, it’s really one of my favourite things about the city. We tried chicken from everywhere: France, Japan, Australia, China, everywhere… But the freshly killed chickens from this market, that’s a world of difference, even though Hong Kong can have a really self-deprecating food culture.

Would you say that Yardbird Hong Kong is helping to change that perception?

I think we just had a great luck with timing! There used to be two schools of thought: there was local casual food, Chinese food with no service but great food… And then there was this really stuffy hotel bullshit kind of thing, where you need to make a reservation, it’s so uptight and expensive and the food is probably good but as an experience, it’s exhausting. There was just not really a whole lot in the middle, so when we came in, it was just the right time and place.