Mr. Bottura, you respect the traditions of the Italian kitchen, but you also like to push boundaries. Is it necessary to learn the rules before you can break them?

Was it always important for you to learn as much as possible?

You have it inside, or you don’t have it. That’s a very important part. You travel with your ears and your eyes open, or you travel to travel. You read a book to learn, or you read a book to read. Very different approach. You look at a painting to do what? To say, “Oh! Van Gogh is so nice. Look at that, it’s The Starry Night.” But you don’t know that Van Gogh never sold a painting in his lifetime because people didn’t understand what he was talking about. That’s the point. Be alert. Go deep into things. If you don’t do that, it’s all superficial. 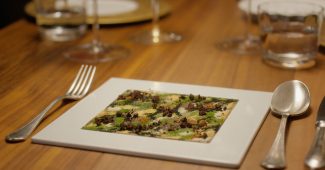 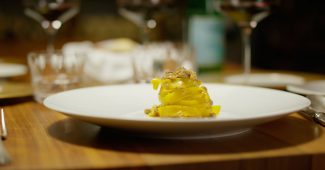 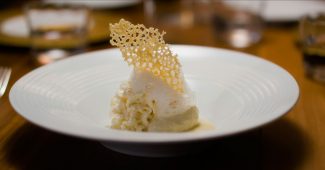 Well there is nothing superficial about many of the dishes you have created. “Five ages of Parmigiano Reggiano” is devoted entirely to the regional parmesan cheese and “An eel swimming up the Po River” traces the culinary history of the Po River Valley. Where do you find inspiration for your dishes?

We compress everything, the passion we have, and from those passions ideas are coming out. You have to know the ingredient, let it in, hug it, caress it, be warm and gentle, and at that point you decide what to do with that ingredient. But we have to talk with the ingredients, we have to hear what they are saying to you. A piece of leftover bread or the most fantastic caviar is the same thing. You have to be alert.

“The secret of a happy life: leave a little space open for poetry.”

That reminds me of the story behind your dessert “Oops, I dropped the lemon tart,” where one of your cooks accidentally dropped a lemon tart and you realized you should intentionally serve it like that.

The lemon tart is a very important concept. If you live your life and you lose yourself in everyday life, you would never imagine “Oops, I dropped the lemon tart.” But, if in your everyday life you leave a little space open for poetry, you can make visible the invisible. And the invisible was a broken lemon tart that Taka just dropped. So that’s the point. The secret of life, of a happy life, is: leave a little space open for poetry in which you can jump in and imagine the unimaginable. We created a recipe with an overripe black banana that came about by listening to The Velvet Underground on vinyl. My wife Lara and I were on vacation and I had just bought this mono first edition series of the album and I was looking with a lot of attention at the Andy Warhol cover and it says “peel slowly and see.”

And what does that mean?

“Peel slowly and see” means everything! It means, “Listen very carefully because there is something brand new here.” And, “Don’t judge too quickly. Just relax and enjoy.” When you have a case of bananas that is overripe, just smell it. Touch it. Open it. And I learned, we learned, about that when we were in Mexico talking with Enrique Olvera, the head chef at Pujol, and he was making a dish of ripe banana sauce. So it’s like a puzzle. You’ve got that, you’ve got Warhol, you put together Enrique Olvera, a distillation, a trip to Peru, and at the end what is coming out? A ceviche of a ripe banana, breaking the border between sweet and savory and that’s it!

Why do you like to borrow from art and culture in your cooking?

Because I’m not cooking to create good food. I don’t care. My mom was cooking to create good food. I’m cooking for a different aspect, you know? We are compressing things. We have to have a reason to cook, otherwise you’re going to go in the kitchen, you sauté some carrots, onion, and celery, and then you put some meat and you create a sauce Bolognese and ragout. That’s it. Is it the same thing? No. It’s not the same thing.

Was there a point when you were younger when you realized that just making good food is not enough for you?

That’s a good question… I was always very hard on myself. I wasn’t satisfied with being average. If I have a bicycle, I rebuild the bicycle as I like it. Same thing with my motorcycle. My Harley-Davidson was called “Lady Day” and looked like Billie Holiday. All my life was like this. I read something a couple of weeks ago about Rembrandt and being intense and finding your own way to express yourself, and it’s not about that. Most of the time it’s about work, and work, and work. Every day. Be obsessed to be Tiziano and find out one morning that you are Rembrandt. It’s something natural that comes out. It’s not that you work to arrive, to arrive, to arrive, by pushing. It’s not that. One day, if you have a little bit of talent and a lot of hard work, you’re going to find out who you are.

Absolutely not. I’m an artisan. I can be Enzo Ferrari, I don’t know, an artisan, a very important artisan who makes custom-made food, but the difference between an artist and an artisan is that an artist is free to express himself however he wants. An artisan has to create good food, or cars that win a race, or the best belt made with the most rare skin, or whatever.

When you were first starting out, you almost had to close your restaurant Osteria Francescana for lack of business. Was that because you were perhaps too focused on being an artist rather than an artisan?

“I don’t believe in a culture of money. What is that?”

So the best restaurant in Italy isn’t really profitable on its own?

Right now we are 40 people working in Osteria Francescana, for 28 or 30 covers a night. So, it’s totally the opposite of a business. You cannot survive with that. But we believe in those kinds of dreams and so I keep investing, and reinvesting, and reinvesting. Keeping some money for my daughter Alexa’s university. I don’t need another sweater or to travel…

You are also very engaged in many social justice projects. You created a dish to help parmesan cheese producers impacted by the 2012 earthquake from going out of business and for the current Expo 2015 in Milan you and a team of star chefs reused the food left over during the event and served it to the poor. Why are such projects so important to you?

Because it’s about culture. Culture brings knowledge. Knowledge opens up to consciousness, and consciousness a sense of responsibility. So when you have culture, it’s very easy to arrive at a sense of responsibility. A sense of responsibility is thinking about the others, not yourself, and moving the spotlight not to show the ego of the chef, but to show that there is an incredible, talented, young generation that have devoted their lives to Osteria Francescana, for example. Or artisans that work their whole lives to create the best cheese or the most incredible balsamic vinegar. Once you arrive and you have this kind of influence - to the region Emilia-Romagna, or the government, or to all the young chefs in the world that are looking at you with a sense of respect - they’re going to listen to you. So if you say intelligent and deep things, the world is going to be better. We can evolve and get different things. I don’t believe in a culture of money. What is that?

Does faith play a role in that at all?

Until this new pope I wasn’t really paying attention to church and religion, it was just bullshit. But this guy came out with simple gestures: buon appetito, buongiorno, welcome. He was breaking all the protocols, going to wash the feet of the poorest people. And I said, “My god, this guy really rocks! He has incredible ideas.” And so I’m going back on my youth now when my mom was trying to teach me all those concepts, and I said, “Wow, this is fantastic.” And that’s why I maybe came out with this idea of creating a Refettorio in Milan for the universal expo, with him.

The pope. And the cardinal Scola in Milan. So I knocked on his door and they said, “Oh, that’s a great idea. Recycling!” Rescuing all this food that is wasted, inevitably, and we’re going to cook that waste for poor people. So that’s the example of the most influential chefs in the world. They’re going to come and as the pope was cleaning the feet, we are working with leftover bread and serving to the poor. Not to the journalists, not to the richest, but to the poor people. No spotlight, nothing. Those are ideas.

Ana Roš: “It has to do with our own personality”

Daniel Humm: “This is enough”