Mark Wallinger's solo show is on at Hauser & Wirth in New York until 27 October 2018.
Emerging Masters
Rolex is proud to support The Talks’ new interview series about the cultural leaders of the future.

Mr. Wallinger, is self-reflection important to you as an artist?

Self-reflection can be both literal and figurative, and it’s something that’s been developing in my work for quite a while. I think identity in a more social or cultural way was always a preoccupation of mine, and then in more recent years, it’s come down to something a bit more basic about myself; that’s to do with getting older, life events, things like that. Art has to have that personal drive or fascination or quest, at least for me, so reflection, illusions, perspective, and all those things that throw one back on one’s self and one’s own perceptions is something that I’ve always been fascinated by.

Is that why you often work with mirrors in your installations?

Yes, because the surface of the mirror is where the subject becomes an object. What a mirror does that fascinates me is it calls into question what one is and what one’s relationship is to oneself — and to the world in general. A perfect mirror throws back everything; every ray of light comes back to us and yet we know that what we’re looking at is without substance or weight.

“It opened up a space that was kind of magical because everything was defying gravity up there.”

So what does that mean for us as viewers when we see our own reflections in your mirrored art pieces, like your Self-Reflection, or Superego?

Well, Self-Reflection is a piece I initially made two years ago at Freud’s study in London where he had spent the last year of his life; I chose to mirror the ceiling of his study. I think we might have all had some kind of cartoon notion of our conscious selves versus our unconscious selves and I was trying to theatricalize that further. So the interesting thing was actually not the viewer’s reflection but that of the furniture and the room.

It opened up a space that was kind of magical because everything was defying gravity up there. And a lot of people said that things look more crisp and vivid than the actual objects of his study. I think that’s another thing why I’m fascinated with mirrors because it suggests this other world.

Not necessarily! In my show at Hauser & Wirth, it’s extremely visual, it’s very much about the viewer. You mentioned Superego, and that is a mirrored version of the New Scotland Yard revolving sign which I built and mirrored in a one-to-one scale. It revolves at the same speed and so the mirror moving round and the fact that one cannot catch their reflection in it, I think, denotes something about surveillance or something more powerfully omnipresent above our heads. You know, we can sometimes be surprised by these kinds of meetings in mirrors, and a revolving one, seeing it at certain angles… There’s a weird allure to that. I want us to marvel at things that momentarily alienate us or estrange us or just make us think about ourselves in a slightly different way. 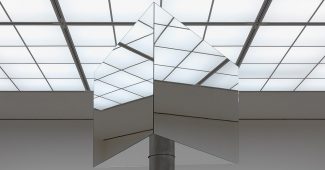 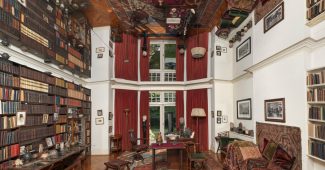 Would a photo that I take with my camera or a self-portrait on my phone accomplish the same thing?

A selfie is different because it refers to you as a 2D image, and I think that takes us off to another dimension entirely. We are constantly fascinated with this magic that can be done with the camera in turning three dimensions into two. And that’s why every so often there’s a little phase for 3D cinema and then it goes away because, actually, we just love what that abstraction does.

What’s something that you’ve noticed about yourself in observing your reflection in the mirrors you work with?

(Laughs) Oh… Well, that I’m getting older, of course! With mirrors it’s interesting because it is beyond our capacity to actually imagine what it’s going to send back from any particular angle. Much of my new work is about looking, searching, seeing, all those mirrored terms. I mean, I’m really making these things because essentially I’m just intrigued and excited to see, “How’s that going to look? How’s that going to turn out?” I love the feeling when suddenly, what seems to be your idea simply becomes a good idea. It’s out there and it’s for everyone else. And I think that’s the kind of joy and the pleasure of being an artist.

How do you know when something has become a good idea?

Somebody once referred to it as a sort of taste in the head. Some things come as a hunch, or these little revelatory moments, or a train of thought bears some kind of fruit. I think it’s this feeling that, “Perhaps I’d like to share this.” And then you put them out into the world and they have to get on with it themselves, so you hope they have an independent life. I suppose I’m fascinated with thresholds, with the liminal, with something about to become something else. And if the work operates like that, then it doesn’t need me or anyone pointing the way too much. Public works for me are quite important as well because I find the context of history incredibly stimulating. It throws up a lot more things to deal with, you know, the problem solving things that I enjoy doing.

Has art always been something fairly introspective for you?

I hope I make work that has an appeal to most people. But certainly, as far back as I can remember, I wanted to be an artist. Growing up, I very quickly realized that I didn’t fancy any of the jobs I ended up doing along the way but even more importantly, I found making art to be really absorbing and rewarding, it wasn’t a part of any kind of school curriculum. I used to draw and paint at home, and it was something apart from all the hoops that life put me through. It really was something for myself.

Emerging Masters
Rolex is proud to support The Talks’ new interview series about the cultural leaders of the future.
Mark Wallinger's solo show is on at Hauser & Wirth in New York until 27 October 2018.
Life
World Guide