Ms. Abramović, did you ever doubt that you were an artist?

When I taught art I was always asked, “How do you know you’re an artist? What makes you an artist?” And to me it’s like breathing. You don’t question if you breathe, you have to breathe. So if you wake up in the morning and you have to realize an idea, and there’s another idea, and another, maybe you are really an artist. It doesn’t make you a great artist, it just makes you an artist. To become a great artist is a huge undertaking! So it’s really important, that instinct. You need the instinct to do it.

How does that instinct manifest itself in your life? How do new ideas to come to you?

I hate studios. A studio is a black hole. I never use a studio to work. It’s very artificial to go to a studio to get new ideas. You have to get new ideas from life, not from the studio. Then you go to the studio to realize the idea. For me the most important spaces to be are the spaces in between – like in airports or lobbies of hotels - when you’re leaving one space and you arrive to another space. Before you start to make new habits you’re really open to destiny, you’re more perceptive, you see things. If you ask someone who has made the same commute to work everyday for 25 years to describe his own door, he probably couldn’t do it. But if you bring the same person to Japan and ask him afterwards to describe something, he could do it because his perception would be open.

Your popularity has grown significantly lately, especially among the general public. Is it strange for this to happen to you so late in your career?

You know, if you were 25 years old and this happened to you and from one day to the next you become respected and you’re in all the newspapers, then it could really get to your head and you could become very narcissistic. In my life I’ve seen so many artists rise and fall like that, but to me it has always been the aim. So having success at 65 doesn’t change anything in my life, but it amuses me a lot that it happened so late. To be in a magazine when you’re 20 is okay, but when you do it when you’re 65 it’s much more fun!

I’m enjoying it very much. Fashion cover stories, I come to the hotel and someone takes care of my clothes, I only carry hand luggage, people think of me – all these little extra bonuses you get. I’m really enjoying every minute of it. But this is just vanity. 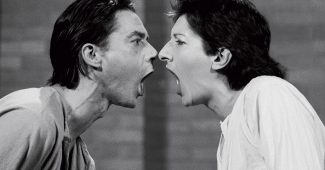 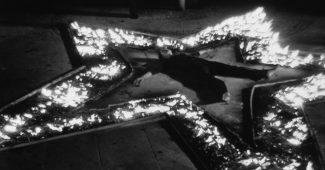 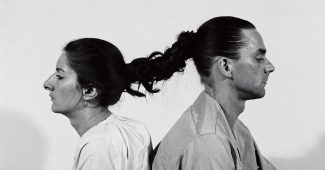 Is it only vanity or can fashion have something to do with art?

I have the answer to this! (Pulls out her iPad) This is the photo we did with Mario Testino for V Magazine, and then I did one for Pop Magazine… But then the thing I wanted to show you was from Visionaire Magazine. Riccardo Tisci, the designer for Givenchy, was guest-editing it and he asked me for an artistic collaboration. I said, “Okay Riccardo, do you admit that fashion is the popularization of art, that fashion always takes ideas from art?” And he said yes. So I said, “Okay, then we’ll do a collaboration: I’m the art, you’re the fashion, suck my tit.” So that’s what we did. (Flips iPad around and shows an image of Riccardo Tisci with his lips against her breast)

So I call this piece “The Contract” and that’s exactly what it is: a contract between fashion and art. You just have to understand what that means, so when I go into fashion I really go in consciously. Anyway, he was very nervous doing that piece. (Laughs)

It just seems like there’s something about the commercialism of fashion that art should rise above.

Yeah, but what about the commercialism of art? It’s all the same. Damien Hirst and Jeff Koons and all these guys have become commodities. But I’ve never made concessions about my art. I’ve never made anything just to sell it, so my conscience is very clear. I’m a woman and I love to wear clothes and what’s the problem! (Laughs)

“The entire aim of my work is to elevate the human spirit.”

Do you worry that the public’s perception of you as a popular figure might change the effect of your art?

They say, “How can she wear the haute couture stuff like that?” and I say, “Why not?” Of course, every positive thing brings something negative, like yin and yang. This kind of conflict comes all the time and you have to always see what your aim as an artist is. What is your duty, what is your truth.

And what is your aim as an artist?

The entire aim of my work is to elevate the human spirit. We can put the human spirit down so easily. Art reflecting society as it is today is not an answer because it’s already shitty, so why put more shit into it? You have to find a way to actually elevate the spirit so that it’s a kind of oxygen to society. To bring concepts and awareness, to ask the right questions. Not always the right answers, but that the right questions being asked.

How does an art piece do that?

Art must have many layers. Art is not just about another beautiful painting that matches your dining room floor. Art has to be disturbing, art has to ask a question, art has to predict the future. It has to do all these kinds of things. An art concept has to have so many layers so that every part of society can take what it needs.

I think your MoMA piece – where you sat in the atrium during the museum’s opening hours for three months – was so successful because it was very accessible, because it had so many layers. How did you come up with that concept?

For the MoMA show we wanted to show only the work where I am literally physically present and this is where we got the title The Artist Is Present. I really wanted to create the kind of situation where seeing the performance art can be a really important experience, but also be understood as a mainstream form of art. Because performance has always been an alternative form of art and I want to make it mainstream. So this is what made it click. This and Lady Gaga.

Light/Dark art performance by Marina Abramovic and German-born artist Ulay. The 20 minute long performance was first held in 1977 at the Kunstmarkt Köln, and filmed a year later in Amsterdam by Louis van Gasteren.

Lady Gaga became such a big part of this change because she entered the museum to see the show. She didn’t sit with me because the line was too long, but the moment she entered there was a twitter everywhere that she was in the museum. So the kids from 12 and 14 years old to about 18, the public who normally don’t go to the museum, who don’t give a shit about performance art or don’t even know what it is, started coming because of Lady Gaga. And they saw the show and then they started coming back. And that’s how I get a whole new audience.

That show seems like a real turning point for your career.

It really turned into the mainstream public. It’s very interesting. This is the piece that changed my life completely – every possible element, every physical emotion – because three months is like life.

How long has it been a goal of yours to make performance art mainstream?

40 years. I’ve really waited a long time. But my whole purpose in life is to communicate what I’m doing. I see myself as a modern nomad and a soldier at the same time. Being mainstream won’t change me because once I have something to perform, a task, then I’m a soldier. And I’ve always been a soldier.