Maisie, how has the digital age influenced you as a fashion designer?

I was in high school in the mid 2000s which was the peak blog era and the rise of street style. I feel like people in my specific age group, really got to grow up with images and fashion in a different way. From a pretty early age on we had unlimited access to archival imagery, which would have been harder to clamp down for previous generations. That was definitely a huge part of my education.

Who were the designers that spoke to you the most at that time?

I loved Rei Kawakubo. It was a huge influence on me when I was learning about her, and Prada, as well. I also really loved Christopher Kane, who was super print-driven, which is cool. I also liked Viktor & Rolf and Alexander McQueen — it was really fun to see those really theatrical runway videos. I specifically remember when I was maybe 12 or 13, going to the Betsey Johnson store a few blocks from my house. I remember it had the hot pink floral wallpaper and all the clothes, I just thought, “Oh my god, this is the coolest thing in the world!” It was like a dream! I was really drawn to that.

“The spirit of fashion that I really love and identify with is: doing what you want! I'm not really interested in everybody following a code.”

Do you think that’s where your fascination with color and pattern comes from?

I’m not sure. It's just so deeply my aesthetic! I've always been really decisive about what I like. I've never had a phase where I wore all black or anything like that. It’s just very consistently been me, always.

How would you describe the ethos of your eponymous fashion label?

The spirit of fashion that I really love and identify with and try to work into the brand identity is: doing what you want! I'm not really interested in everybody following a code. I'm happy with seeing my own clothes out there in the world, when I see people take it and really recontextualize it in a way I wouldn't have imagined — or that’s different to the way that I showed it.

It must be quite inspiring to see people making your clothes part of their own identity.

Yeah, and it happens all the time! I mean, things in the world always end up being interpreted and popularized differently than how I predict. For example, we have what we call our perforated nets, which are these skin-tight knits with little hole details. They’ve become our most popular item, by far! And when I was first showing those I thought they were super wacky, the least commercial piece… I was imagining that people would wear them either like, under a t-shirt or as tights under a dress, like leggings. Layering pieces, you know? But they've become so popular, even on their own. It blows my mind! It's so cool to see that this is how I guess, work evolves once it leaves my hands.

It’s very difficult to foresee what people like in general, especially when you are trying to create something new.

True. Whenever anybody's making something directional, people will hate it or people will love it. If it's new or just, quite frankly, not generic, it can be a little polarising. People might just not feel the clothes are for them. And that's fine! But I would way rather make clothes that are really directional, and that feel super special to the people who do love them. The thing is that right now, there's so many things happening at once in the fashion world and there's more of an embrace of completely different styles. it’s more about how you wear something. 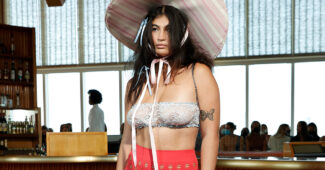 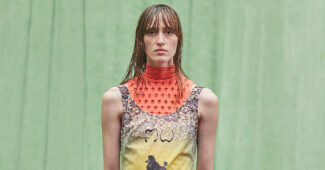 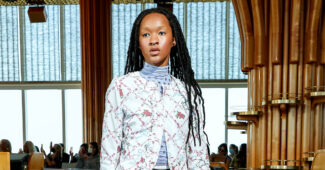 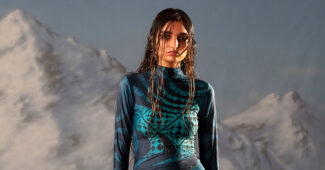 Because there’s room for everything, you can take more freedom in your own expression.

I embrace it by just continuing to do whatever I want. I feel like living in LA is great for this mindset, because it's so lighthearted here, it's always sunny — that helps to keep that mode alive.

Before starting your own label, you were working at Kanye West’s brand Yeezy where you started as a runner and rose to become the head of womenswear design. Is that why you moved to LA?

No, I was trying to find a job in LA because I knew I wanted to move here. And then the stars aligned, and I started working at Yeezy almost right after I made the jump. But I learned a lot there, especially in terms of thinking in a macro sense. Like, if these are the clothes, then what is the show? Of course, working with Kanye, he’s also a musician, he has a music tour — how does the fashion and music tour live in the same world? So really just thinking of the big picture, the greater context at all times was a huge takeaway for me.

Kanye West also encouraged you to start your own label and backed it financially. How did you handle that kind of pressure?

It obviously gave me a massive leg up, and therefore I'm super grateful. But the pressure was definitely on. Personally, in terms of the standards I set for myself, I couldn't just be like, “Okay, well, you're just one girl who started a brand two years ago.” Even though that's true. I do put a lot of pressure on myself. I have this insane opportunity, and I feel like I’d better not mess it up. It’s a once in a lifetime opportunity.

What made you decide to remain in LA?

Well, one of the things that really drew me to move into LA is the type of projects that I saw coming out of here. I felt like New York was a bit more institutional: if you're a smaller project, you're going to do things very by the book, whereas in LA, it had more of the spirit of like, “Yeah, I made these things. Here they are!” (Laughs) It’s sort of a more experimental approach… It's more like, if you're making clothes but you didn't show them four times a year during Fashion Week, it’s still legitimate.

“I know that I'm just going to dilute the creativity of my work if I tried to overstrain myself.”

Is that cycle something you’re trying to break out of?

Yeah, I do a weird rollout. I've always just put my foot down and said: “We're only doing two collections a year.” Quite frankly, I can't handle more. But I do have a wacky rollout where I sell the collections pre-season, and then I show them during the main collections. Essentially, even though the public doesn't see it, it's wholesaled a few months before it's shown whereas usually, you do the fashion show and then you sell them immediately after.

That must also give you more control right over the production as well.

Right, yeah. There was a whole push and pull when I started because people on the sales end love the pre-collections. But at the same time, from a press perspective, more people pay attention to the main collection, so I was getting pulled between press and sales on which one to do. And I was like, “Okay, I’ll just do both.” But at the same time it's only one! (Laughs) It’s really like have your cake and eat it too type of working. It works for me. I like it! And I know that I'm just going to dilute the creativity of my work if I tried to overstrain myself like that.

What other challenges have you encountered in starting your own brand?

Honestly, to put it in a really eloquent way, just figuring out how everything works. (Laughs) I always worked as a designer, I had a full time job, very clear responsibilities: I design the clothes. But I'd never run a business before, I had never managed production before, I had never produced shows before… Just so many items that I had literally zero experience in. And then I'm thrown into learning them on the fly. Years ago, whenever I would think about running a business, I’d feel like I don't know if I can handle that; maybe I do just like having my responsibility as a designer and having that focus. But since I've been in this, I actually love that! You know, a huge part of my identity has been fashion since such a young age. I like to joke that I've been grooming myself to be a designer since I was like 12! It’s always just been a huge part of my life and a huge point of excitement for me.