Mr. Yansong, do you believe in utopia?

Yes, I do. Actually, I did a proposal called Beijing 2050 where I tried to illustrate the future of the city. I proposed to make Tiananmen Square into a forest. This forest would obviously be artificial and actually I don’t think it would be so difficult to accomplish. I even found proof that before we built Tiananmen Square, before this country, this new nation even existed, we had a lot of green there. So I think in the future, if this space could transform to a very natural and human space, I think that would not only change this area but also all of China: how we build a city, how we think about urban spaces… I think that’s maybe my real utopia.

Well, nobody was saying, “This is a bad idea.” (Laughs) But it’s very strange, if you’re a philosopher or musician or an artist, people automatically believe you can see the future. Even if they don’t like you, they accept your vision as an individual. But for architects and urban planners, people don’t trust you! When we’re talking about pollution, traffic, for example, democracy works. But designers and urban planners are very idealistic, so I do think that we should be involved in giving the public a view of the future or triggering that discussion. If we’re talking about the urban landscape as an advanced, forward-thinking art form, there must be some intellectual thinking involved.

“I think where traditional values are concerned, Chinese people see nature as very symbolic. It’s a form of culture.”

The urban landscape as an art form?

Take Beijing for example, there’s a lake in the middle of the city, there’s a mountain, and all of that is artificial. They built Beijing like a largescale garden. It’s a natural element but it’s actually not real nature. I didn’t know that when I was young but I climbed the mountain, I learned to swim in the lake… That made me feel like I was living in this very natural village although I’m in the city center. Later on, when I went to other countries, I found that actually it’s very unique that Beijing has a plan like that. With Chinese gardens, they are all about human spirit, the layout, the rocks they use, the trees they set, the locations… It’s very strategized.

Constructed nature, right. But I think that kind of nature is very social. It shapes the people, how they behave and how neighbors and neighborhoods behave… With big cities like Shanghai, Hangzhou, Nanjing… All these cities with long histories, nature plays a very important role in their urban planning. Even before the cities were built, they chose the locations next to mountains and rivers for business reasons, and then they would extend this natural scenery into the city with artificial rivers, islands, long bridges. I think where traditional values are concerned, Chinese people see nature as very symbolic. It’s a form of culture.

Were you surprised when you started travelling to other countries and found that nature played a very different role?

I think nature is definitely also important in the other places, you have Central Park in New York, for example… But with Western gardens, the difference between the artificial or manmade and the natural is quite clear. Same with Western art, you have the landscape paintings, you know, they draw the trees, the flowers, the mountains… But in China, in Asia in general, we have a style called shan shui, which is a type of ink painting. We also draw the mountains and water but in a very poetic way, with less focus on realism, it’s not a copy of nature. It’s more about imaginary scenery, it’s about the spirit behind it. 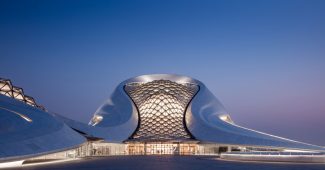 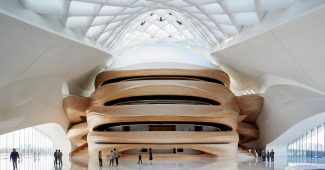 But this shan shui concept extends beyond just painting, right?

Yes, shan shui has become a very special philosophy in poetry, in music — they all start to use nature to express human feelings. Since the industrial revolution, we tend use technology to show our power, you know, we build high-rises, towers, big buildings that become symbols of power and capitalism. We don’t talk about how emotions and nature can be connected. We have green architecture and urban planning, sure, but when I go into a zero energy office building, I’m in a machine, I’m not inspired to draw or write a poem or create music. So, I think we should bring the shan shui concept, these traditional values, to modern architecture.

I’d like to use natural elements in architecture as a device to form a new landscape in which humans can really feel something. For example, we’ve just completed this opera house in Harbin. Very often, especially in China, cultural venues become empty landmarks, maybe because of the lack of content, I don’t know but somehow they become unapproachable. They’re so grand that they’re almost…

Right, like a museum for example, they’ll put big bears in front of it, like a classic building trope, but that’s really quite unfriendly. So when I designed the Harbin opera house, I thought, “Maybe I should blend it into the landscape and make this building part of its surroundings.” I didn’t want to make an isolated object. I designed it so that you feel that the architecture and this landscape is seamlessly connected in its shape, its colors, its texture. Also the material we used inside, we wanted people to feel that this is a very light, bright and natural space so we used very cheap local wood — in the countryside they use it to make furniture — and we applied it to the building almost by hand. When you go inside, local people can touch this wood and get a very familiar feeling. I try to find this moment, this emotion that people can really feel.

“Emotion exists not just in the traditional gardens or churches, but also in the modern world.”

It’s interesting because when thinking about which art forms evoke emotion, we tend to think of things like film, music, painting…

Well, cities are very commercially driven, we have a lot of big buildings, we want to be more efficient, to make more space, we want our buildings to be taller, to look more powerful… But I think we should also be taking care about how humans feel in those buildings. The most obvious example is a church. I think they build churches to make a very special atmosphere: the height, the light, you know, you feel that there’s a God talking to you from the heavens. And that kind of a space, it’s very spiritual. Or if you think about, for example, Fallingwater by Frank Lloyd Wright. It’s very poetic.

How often do you have that kind of emotional reaction from architecture?

I can say this because I get a lot of inspiration from architecture! I still remember when I visited the Salk Institute designed by Louis Kahn in San Diego. I knew this was a masterpiece from the book, but when I went there… It’s beautiful. There’s an empty plaza and when you sit there you can see beyond, the sky and the ocean beneath. Ocean and sky; the horizon. It’s very moving because Kahn framed nature with his architecture, and it creates this very long coastline… I saw a lot of people just sit there and cry. I think that’s proof that emotion exists not just in the traditional gardens or churches, but also in the modern world.