Liza Lou's new solo exhibition, Classification and Nomenclature of Clouds, runs between 6 September - 28 October 2018 at Lehmann Maupin Gallery in NYC Chelsea.
Emerging Masters
Rolex is proud to support The Talks’ new interview series about the cultural leaders of the future.

Ms. Lou, how has moving from Los Angeles to Durban, South Africa changed the way you approach your art?

It’s actually such a big question that you’re asking because it has, in so many ways, changed me, and my work. The first thing that kind of occurs is the re-evaluation of everything. For me, I felt as though I had to reconsider everything about myself, fundamentally. My ideas about who I was, about privilege and what it means to be a white person and to live in the West. I found myself really questioning what is the nature of happiness?

I think I realized that in the end that it’s not even about happiness. I realized that one of the first things I needed was to factor failure and loss into my work in a way that I hadn’t been dealing with before because in America, there is this idea that you’re entitled to happiness — it’s written into the Constitution. I never walked around thinking, “Oh, I’m so privileged!” but when you go to places where you see real suffering, you have to ask yourself who you are in relationship to suffering.

“Minimalism can seem very dry, but for me it’s become more juicy as well. It’s almost like I’m trying to get down to the raw pit.”

Did acknowledging that privilege have an actual, physical realization? Or was it more of a spiritual growth?

Well, when I started working with beads, there was a little bit of irony at play there: it was a way to bronze things, a way of valorizing something that would be lowly. I thought about what the material meant art historically but I didn’t think about what it meant traditionally — the history of beads goes back thousands and thousands of years. Beads are really primal, they are used in prayer like rosaries or mandalas. But I had never considered any of that. Going to South Africa, my initial idea was that I would work with women who have a familiarity with this material, who have a history with it, and then maybe I could make a difference, maybe help people pull themselves out of poverty.

I had no idea that I was actually dipping myself in a really rich tradition that had to do with not only the material, but with practice and labor and the way South Africans think about labor. They think about it as lifeblood! Survival is at the core of it. And once I saw that, it just brought me to my knees, made me realize that the material was much, much deeper than I realized and it gave me profound respect for the material and the practice. My work has since become a lot more minimal, which can seem very dry, but for me it’s become more juicy as well. It’s almost like I’m trying to get down to the raw pit. In doing that, what has been stripped away is some of the more physical, obvious story lines that used to surround my work.

It’s funny that you would describe your work as minimalistic given that you’re most famous for your incredibly detailed beadwork.

Right, I used to make things that were real-size environments — that would be a distraction; for example, my earliest piece was a life-sized kitchen. It was done entirely with tweezers, applying beads to every single surface of the kitchen, from the drapes to the floors to the dust balls. Every single inch of it was covered. But what was the essence of that work? It was labor! I used beads to say, “Here is this monument to women’s work, to the labor that is uncelebrated, to the mothers and grandmothers who baked pies, and cooked and sowed but yet are never thanked, the labor that is endless.” 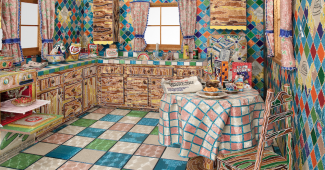 Despite being grounded in such realism, would you agree that your early work was more based in fantasy?

Fantasy isn’t quite getting to it; it’s more like ecstasy. I made so many works in the earlier part of my career where the volume was turned way up, like a radioactive visual explosion. I was interested in these visual orgasms where the little retinas of your eyes would expand, contract and blow up — that kind of visual overload. In The Kitchen, there’s a bowl of Frosted Flakes and you can pick up every frosted flake, there’s beads on every individual one. The reality is somehow magical, as if Midas the King came along and somehow made this whole thing happen. Fantasy is the starting point, the gateway to this radiant, ecstatic experience.

Beadwork wasn’t often thought of as a high-brow art form — perhaps still isn’t, even today. Does that bother you?

You seemed to thrive on that challenge.

I wouldn’t say that my work is painful though, it’s joy, it’s the thing that I do that comes naturally to me, it’s my particular form of expression. Sure, it wasn’t really a normal kind of artist path where you have lots of friends and you’ve got a community around you, a wonderful school with professors… I didn’t have that at all, I didn’t have any support. I was quite lonely. In order to make The Kitchen, I had day jobs and then I would work at night. And if I went to a party, I would bring my oven rack and bead it. It took me five years to make!

“It’s important that art, especially visual art, defends itself without anyone there talking about it.”

Why was it so important to you to commit five years of your life to that artwork?

We’re a culture where everything we have is made for us and there is this disassociation with making, so making is thought of in a very negative way: “If I had to do that, that would be a big waste of my time,” or “I need to go get someone else to do that for me.” That’s the dark side of it, when you think about manufacturing, the exploitation side, that kind of expediency… In that we really lose our humanity. But when you’re working with something that is as slow going as is what I do, there’s a real wonderful opportunity to see that as meditation.

Is it important that the viewer knows how much work your art takes?

I think that if my work only rests on, “Well, that took a long time to make!” then I’ve totally failed. It should just stand on its own. I always longed for it to do that. It succeeds on another level, beyond the story of how it’s made, I hope it just succeeds if you just stand there, silently. It’s important that art, especially visual art, defends itself without anyone there talking about it.