Leo Villareal’s new solo show runs from 22 November 2019 to 18 January 2020 at Pace Gallery, London.
Emerging Masters
Rolex is proud to support The Talks’ new interview series about the cultural leaders of the future.

Mr. Villareal, as an installation artist, how do you think about the lifespan of your work?

I do think a lot about the temporary versus permanent — that’s actually something that I have learnt a lot about at the Burning Man festival, where I made my first light sculpture, that things are temporary, there’s nothing there when you arrive and nothing there when you leave. It’s about being present and in the moment and not being so concerned about permanence, which can be a burden. But on the other hand, sometimes what happens is that work I’ve intended to be temporary, then ends up being turned into permanent installations.

Like your Bay Lights installation in San Francisco that was only supposed to run for two years and is now a permanent part of the Bay Bridge experience.

Well, however permanent LEDs on a bridge can be. People sort of fall in love with the work and they want it there because it really has transformed the spaces that they’re in. My feeling is that I really want people to see my work with their own eyes and to be present with it. You know, I actually have a lot of challenges with the documentation of my installations — it’s especially hard to document my work with a still image of something that’s intended to be moving.

“How do you create that one single moment that evokes so much movement?”

And even when you do capture it, photos and videos don’t do justice to the real experience.

Right, because how do you create that one single moment that evokes so much movement? The photos and videos are not what it looks to the eye, because what I’m bringing to my installations is the dynamism and sequencing part. Static illumination is something pretty standard, but adding this sense of movement of lights is really where the new part of it comes in. There is a kind of randomization: it’s not a loop, it’s not something that repeats. There’s no beginning, middle, or end.

It also means that although the installation itself is permanent, its actual content is completely temporary because you never see the same thing twice.

Exactly, it’s going to be doing something different than what they saw previously. This randomization helps these pieces that are up for a long time to have a sense of mystery.

Do those goals depend on your use of technology?

I consider myself an artist first, who just happens to use technology. I think the danger with a lot of technology is that it can just take over and become something that doesn’t really connect to the ideas. It’s very seductive — it’s something that in itself, for instance, is used in a lot of advertising. You know, it’s pleasing to look at moving lights and our brains can’t help but to recognize patterns, so we are naturally drawn to it. That’s why I think the open-endedness of my installations is very important to me, in that there’s no agenda.

What do you mean by open-endedness?

I mean that I am actively engaging chance. It’s hard to describe my process, but I’m engaging principles of emergent behaviors and artificial life in my work. So I set up certain conditions and let something happen. And when something compelling occurs, I capture those moments, and those become the building blocks for the piece. I’ve described it sometimes as tuning a musical instrument: you just spend time with it and continue to adjust until it just reveals what it is. It’s a really long process of listening.

Katharina Grosse says that when it comes to her installations, there are the things she is clear about, such as the colors, tools and situation, but the rest is happily out of her control.

Absolutely, there are so many factors — in the case of the Illuminated River for instance: is it foggy, is the moon out, what’s happening with the water? The site is so dynamic. The Thames itself is like a living thing, that rises and falls five meters twice a day and it just has such a strong personality. I mean, the foreshore is incredible: suddenly you have this huge area that is revealed and people are still finding bits of Roman coins and all sorts of things down there. (Laughs) When you see all the kinetic activity around it, with the movement of boats and pedestrians and trains and helicopters, there’s so much going on! 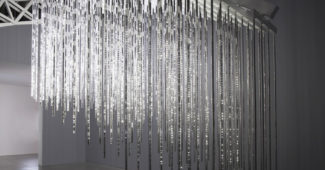 How do you go about choosing the color palette for the lights in such a dynamic space?

Color is tricky, it’s very challenging. Generally, I make a lot of monochromatic pieces and just focus on a single color. But I am very interested in color theory. For my last project, the one thing that I knew was that it wasn’t going to be any of the primary colors red, green or blue. You know, I was out one night in London and it was raining, and watching that kind of atmosphere with the rain really affected my thinking: I started to try to work some of that smoky, atmospheric feeling into it the colors of the lights. So I created these tones of brown, for example — you wouldn’t think you could create brown light, but we’ve added an additional amber LED to the color fixtures that we are using, which creates these richer golden hues.

Are you trying to make your technological elements more organic?

Well, this is what I find really interesting: I’m not taking a video of the movement of water for instance, and then sampling that, but rather I’m recreating organic movements using programming and other techniques to get to the essence of it. Growing up, I spent a lot of time in the desert environment, just watching the sunrise and sunset in the desert is really incredible. But I really do think that some of those elements that I grew up with have kind of channeled into my work. I think somehow, these very mechanical means are able to create things that we’re very connected to as humans, things that we respond to in nature: this sense of wonder or sublime.