Lawrence Weiner's permanent installation, In Front of Itself, opened at The Shed at Hudson Yards in New York in April 2019.
Emerging Masters
Rolex is proud to support The Talks’ new interview series about the cultural leaders of the future.

Mr. Weiner, do you think that you've been an integral part of the evolution of art?

I feel like I’m part of the world, and I was just one of those lucky people, like a bricklayer, who was part of building it. I feel that way. But every day I had to look at things and see them in relation to the new world, in relation to what’s happening that day. And readapt and reinterpret. But you know, I’m 77 years old. I started showing when I was 18. Things that I saw as a young child, don’t apply any longer!

What I’m seeing now is that a lot people are spending most of the resources of the art world fighting to keep a position that they took at some point in their life, but that simply doesn’t apply any longer. It’s not right or wrong, it just doesn’t apply. They use their resources to fight for what they thought they knew.

“You have to look at it as what it is in the moment. That’s what I try to do with my work.”

Why does that knowledge become irrelevant?

It’s like the difference between internal combustion engine and the steam engine. There’s nothing wrong with either of them, but steam engine doesn’t quite work for vehicles in 2019. The same with our perceptions of things in art. What you saw when you were 18 may not apply any longer because the world has turned. As artists, we do things that add something into the world. Once it’s added, the world is not the same as it was before. Once you add something, a new material, you can’t use the old fashioned way of determining things. You have to look at it as what it is in the moment. That’s what I try to do with my work.

What changed within your own approach to art since, for example, your famous Statement of Intent in 1968?

Well, when I started I was under the misimpression of a Chompskian idea that all language was universal and innate. I am not so sure any longer, but I don’t know the answer to that. I find that I have to look at something and determine what it’s called, in order to be able to communicate it to somebody. I have to make gestures in the work that I do because language cannot accommodate what I’m trying to show. I feel that the negotiation is not one of information, it is a social one. Have you ever been to New Guinea?

I did a little book on New Guinea and it revealed a lot about this idea that what we think is anthropological has to do with what was taught in school, but it has very little to do with what’s out there on the field. People talk in terms of this, that, and the other, but you get to a place like in the middle of New Guinea — in the jungle or in the bush — and people know what art is! It may not be what you think art is, but they know it’s art, and what its use is, and you can immediately have an enormous conversation.

You once said that even though society accepted that bricks or fluorescent lights could constitute art, “the minute you suggest that language itself is a component in the making of a sculpture, shit hits the fan.”

(Laughs) I don’t know why, but it makes a lot of people angry. I make a specific object, without a specific form. But in fact whatever you read is what it means. It doesn’t have a hidden meaning. This is not Dada, making noises and hoping that those noises have meaning within a society — it’s not that at all. What you see is what it says it is. I don’t mean to be difficult, but I do see a problem when we think we can differentiate between what we’re saying and what the words are — or the idea that it’s art or it’s not art. If it’s a stone, it’s a stone. It’s not a metaphor for a stone, it’s a stone.

Does it bother you when people try to see a deeper meaning?

They’re looking for something else and I have no idea why. There’s no metaphor in any work of mine. There’s no secret in the words. You have to look at the work — if it could be told in language, I would’ve used language.

Like the famous Wittgenstein quote: “The only thing of value is a thing you cannot say, but you can see.”

Right, there’s no way to misinterpret “stone,” or “wood,” or “water.” There is a way of misinterpreting “love,” “affection,” and “desire.” But that doesn’t concern me as an artist — that’s for literature. This is a problem: when you use language instead of words, it means that the words no longer fulfill what you need, so you need the gesture, but then there’s no way to translate it back into words! When a person on the street makes a hand gesture, there is no way to explain what it means, because it doesn’t really mean what you think it means, it means what they think it means. 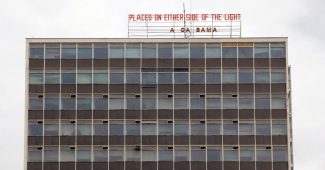 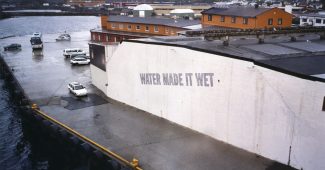 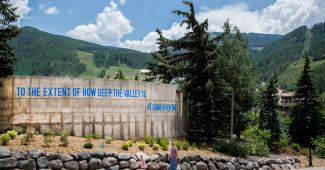 Are typefaces important in the interpretation of your work?

This determination with type, fonts, and all of that — it’s pretty much like an oil painter handling acrylic paint. It’s a skill. Art in itself is not a skill, but the presentation is always a skill. It turns out that the gestures I’m making are totally understandable by people who are studying mathematics or physics. In a way, my dream is digital because pixels will work with all other pixels, it doesn’t matter what color or how big they are. There’s no hierarchy of pixels.

This is perhaps the key to your work and its appeal: stripping a sculpture down to what anybody can understand and imagine.

I make a lot of public work, and I don’t find it much of a problem to communicate. And the public may or may not like it, but their reading is not very far from what it says. I think we’re all communicating quite well, especially in the art world. I just came back from an art conference and you’d be surprised how often people say things like, “I don’t agree,” but they do understand. With my work, I try to do something of the moment, that is decipherable by a group of people — and I move on from there.

Emerging Masters
Rolex is proud to support The Talks’ new interview series about the cultural leaders of the future.
Lawrence Weiner's permanent installation, In Front of Itself, opened at The Shed at Hudson Yards in New York in April 2019.
Life