Ms. Smith, what does freedom mean when it comes to art?

I would say I have a lot of freedom as an artist but I don’t think that makes me free. My work does what it does and I just try to follow it. I would love to be a much better artist but you are just who you are and you’re given what you’re given. And the next person is given what they’re given. You can be free, and that certainly means something, that I have mobility and agency and I can get up in the morning and work on my art rather than do something else… But right now, I’m doing etchings of dandelions. That’s what I’m given. That’s what my brain says. “Pay attention to the dandelions and the bees.” And so I do that.

The bees? Is that because your husband is a beekeeper?

Yes, my husband loves his bees and is very sensitive and thinking about it, and reading about them all the time. I think there’s about 2000 different kinds of bees in the United States! And one is very lucky if their bees stay alive. One can strategize different ways to try to keep bees alive but they are also very much at the mercy of the pesticides and chemicals that are allowed to proliferate thanks to the government.

“One can work collectively but one can also start at home, start within themselves.”

Do you worry about nature and the environment? Your art would suggest that you do.

I think I just want to notice and pay attention to animals. Once I had dream about a ship, and instead of Noah’s Ark, it was singular animals on a death barge. I ended up making this big black drawing based on those animals and I showed it in Washington when Clinton failed to sign the Kyoto Protocol. You know, we were facing this extinction of large mammals with global warming… But mostly due to deforestation and displacement and humans taking up space, so I had this idea that I really do have to pay attention to animals.

Richard Gere said that protests and demonstrations by the people are more valuable right now than having an artist-leader come forward.

And people can also be politically or environmentally active in ways that are more subtle.

Right, I mean, one should try to educate oneself, change oneself in one’s own life, you know? And just become more conscious person. One can work collectively but one can also start at home, start within themselves. There are critical moments where things change because people don’t want it anymore and they have the possibility to move. I think in a sense, the #MeToo movement now is about that. It’s just about people saying, like, “These presumptions or things that we take for granted as being normal are no more normal than anything else.” And then the paradigm shifts and people go, “Well, I don’t want to live that way anymore.” I think those are the things that are big cultural fights that are happening all the time. People have to, at any age, be citizens. 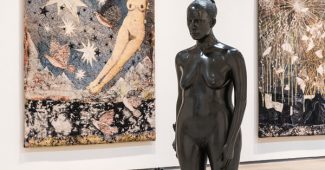 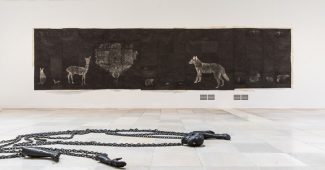 You have to try to be a citizen. I can take on very many different forms, ones that are very overt and some that are quiet. And all things can be beneficial. So, I have no idea what people should do so to say that someone is not active enough — I’m not active enough either! I just took an airplane to get to this exhibition at Haus der Kunst. I don’t think my behavior has helped animals in any way particularly but I know that at least I want to be present for the nature that’s around me. I want to see it.

Is that why you make art?

I just like making art. I like making things! But I also can make jam or wine or something like that and that’s very satisfying also. In a way, in this stage of the game, it’s nice to think about making something that you don’t have to babysit the whole rest of your life, something that goes away, gets eaten or gets drunk, and disappears off the planet… I’m 64 so I’ve started thinking about, “What am I doing with all this stuff that I’ve felt the necessity to make? Is it necessary to be proliferating the world with my brain endlessly?” At the same time, I’m as selfish as any other artist, I really feel the most clearly myself when I’m making my work.

Would you really call it selfishness?

(Laughs) I think that artists are some of the most privileged people on earth. You take the privilege to be an artist, like as a self-determined preoccupation, you just say, “I want to be an artist,” then you say, “I am an artist,” and then you’re an artist. You don’t have to be a good one or a bad one or anything but if you’re willing to devote your time to it, it gives you a great life.

“Art was a place that I felt like I could represent myself as a person, that I felt safe with.”

Is that what you meant when you said that your art saved your life?

I think for me emotionally, art gave me a place to express myself in which I felt like myself. It was a place that I felt like I could represent myself as a person in an external manner, that I felt safe with because it has some space between you and it, but also that I felt good about and that I enjoyed. That’s really how I meant it: emotionally. It’s a tremendous privilege to be an artist, and I’ve been very privileged to be one.

I think it’s a privilege to be a writer as well.

Yeah, it is! But these are all privileges that are taken. You don’t have control of how other people receive it but you can wake up and say, “Okay, now I’m a writer.” You can have no talent and just get better at it or not get better at it. You can learn on the job… And if you can keep it going, then everybody’s lucky. We’re the luckiest people on earth.