Mr. Forkish, what does to it mean to you personally to be an artisan?

To me it means someone who is involved in a craft. To have an artisan produce something means you are using your hands to make something and there’s an implication that it’s a quality product. When I opened my bakery in 2001, I called it Ken’s Artisan Bakery and a lot of people pronounced it wrong, a lot of people just didn’t know what it meant. And then probably about 10 years ago, the word artisan started to be adopted by big business in ways that had nothing to do with the real meaning of it.

Has that been detrimental? Do people consider it a “buzz word” even though it has a real meaning behind it?

I don’t think people really think too much about the word artisan anymore. I was on Twitter yesterday and I follow a lot of food people, I saw someone’s tweet about being fed up with artisan pizza because that means it’s got fancy ingredients on top. I just thought: “You and I have a really different idea of what artisan means.” For me, an artisan pizza is a very well-crafted pizza with a really good dough. It could just be tomatoes with cheese. I think the word does not have a consistent meaning across the board and I’ve sort of lost my enthusiasm for it, to be honest, but I named my business with the word years ago when it did have a meaning to me. So I’m sticking with it!

“Baking bread satisfies so many senses: visually, your sense of smell, of taste, the way you can hear the bread crackle when you pull it out of the oven…”

How would you explain the recent infatuation with bread baking, especially sourdough, when this is a craft that has existed for years?

I think a lot of it is a cultural thing. How many times a day do you look at your phone to send a text message or an email? The tactile pleasures of bread baking is something where you can see the results of your work. It’s a real world thing. There’s nothing artificial about it, there’s nothing virtual about it. It satisfies so many senses: visually, your sense of smell, of taste, the way you can hear the bread crackle when you pull it out of the oven…

Your book Flour, Water, Salt, Yeast has also been essential to the movement, especially in America.

Well, Flour, Water, Salt, Yeast and my recent book The Elements of Pizza were written to train the reader how to bake at home using my methods. I think that people will only be deterred from baking if they have the assumption that they’re going to get it right the first time. That’s one of the things I really like about being an author, helping people to realize that over time, you’re going to get a lot better. I like when people discover those simple pleasures that are a rebuke from a lot of the day to day stuff.

Apparently it was those small pleasures that first attracted you to baking when you were travelling around Europe in the 1990s.

Yeah, I was working in a corporate career at the time, and I lived in suburban Washington, DC. I met this woman in the mid-nineties when I was in the Alps on a hiking trip, and she lived in Paris. We got close, and I would fly over to Paris pretty frequently and we’d spend most of my days there just visiting bakeries. I loved looking through the windows of bakeries, I’ve always been attracted in a really deep way to the things I saw in the windows, the smells, watching the people work… It just drew me. 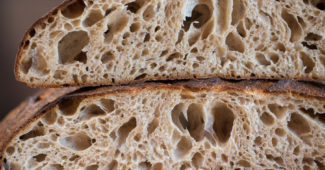 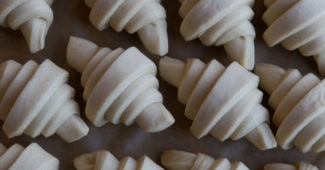 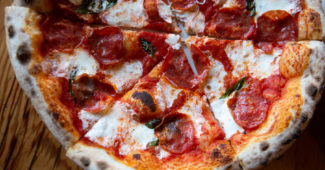 I’m from Montreal, so I have very fond memories of eating freshly baked wood-fired Saint Viateur bagels straight from the bag. Those kinds of memories were essential to my own start as a baker.

When I decided I wanted to become a baker, I had no experience, so I was just trying to absorb as much as I possibly could. I still remember visiting Lionel Poilâne’s boulangerie in Paris for the first time. Have you been there? It’s so cool! It has this particular atmosphere that’s hard for me to describe, there’s these gigantic loaves of bread everywhere, there’s even a bread chandelier! I think in the sixties and seventies, there were a lot of artists, like Salvador Dali, living in the Left Bank that would go to Poilâne’s shop and trade works of art for bread. That’s where I discovered the pastry called cannelés, which I ended up baking in my own bakery. We were one of the first bakeries to make them at the time in 2001.

Would you say there is a certain sentimentality in baking bread that doesn’t exist within other types of cooking?

Even though I do have those sentimental memories, I still wouldn’t say there is an inherent sentimentality. But there’s definitely a bridge one needs to cross.

Well, as a professional, you’re not lovingly caressing four loaves and calling it a day. Even a small shop like I have, on a busy day you’re going to bake about 900 to a thousand loaves of bread. It’s work, it’s hard physical work, and it starts very early in the morning. And those are the moments when you may still have an romantic attachment to the things that you’re making but at the same time, you’re hustling, you’re looking at your watch because you need to finish shaping these baguettes, you’ve got bread in the oven that needs to come out and mix in the mixer…

“You can’t lose track of the fact that you want to be a craftsperson and you want to deliver a certain experience.”

You’re on a very tight schedule.

Yeah, and I think most people haven’t considered that. They may not know that they can tap into that, it’s not easy. But the rational side is something that appeals to me greatly. I like figuring out how things work and how to make them work. Every day there is some kind of problem solving because there is no day in which every single thing is perfect. And if you’re driven to do things extremely well then you can hopefully rationally look at everything you’ve done in the day and try to understand what could have been done better. A lot of times, that requires me to communicate what they need to do better with another baker who works for me. And that can be very difficult.

Will Goldfarb, who owns a desserts-only restaurant in Bali, said that the hardest thing for him is that although his operations costs are the same but he will never make as much profit as a steakhouse because he can’t sell desserts for that much money.

Right, that’s it as well, it’s very expensive to open a bakery. The cost of the oven, the mixer, building up the space to support those things, the sheeter, all the refrigeration and freezers that you need… And then the labour intensive part of the job if you want to do good quality, it can be a few years before you can actually start making a profit. Financially it’s very challenging, whereas a lot of restaurants, they get a ton of publicity when they open… They just work on a completely different fashion. The business side produces a ton of stress and it’s never easy. Ultimately, you can’t lose track of the fact that you want to be a craftsperson and you want to deliver a certain experience… You’ve got to keep moving.