Ms. Grosse, when did you first start to think outside of the canvas as an artist?

I never thought that a painted work was limited to the canvas. It’s always been multi-dimensional. Even when I was a student, when I painted, I would always paint on different kinds of surfaces and objects very organically, and then add other things. As a child I would attach many sheets of papers together and paint volcanoes on top of the mound and play music for it. I’ve always thought that an activity doesn’t stop, but instead it goes into another realm of your life and turns into something else.

So you’ve never seen the surface or object as limiting?

Well, one of the things that I distinctly remember thinking about the world is this idea of being able to trespass. When I went to galleries, I wouldn’t only look at the paintings, I would look at lot of things — and then I realized that this kind of observation runs throughout human history. If you go and see cave paintings, for example, you notice that the cave itself was a very important part of the image. It is not just about the tortoise that’s drawn. So, no, I don’t see limits.

Does that hold true for your own work or do you have to restrict yourself in some way when it comes to art?

That’s a really good question. I think I encounter these questions of limitation most often when I’m coming into an academic discussion: “But the work doesn’t represent anything — why?” 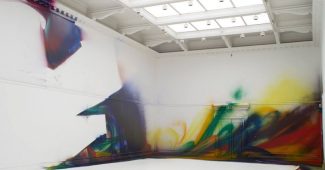 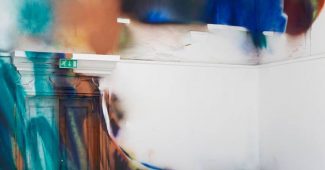 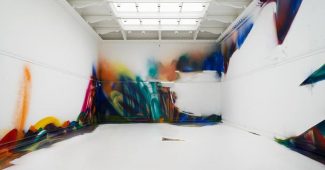 And what do you normally answer?

For example, my first spray painting had a lot of green, and I wondered whether it referred to foliage on a tree. Is that a good association or do I not want it? And if I don’t want it, how can I avoid it? And then just a couple of works later, I realized that these questions are actually limiting. These approaches are limiting — not my abilities but the academic discussion that tries to grasp certain areas of philosophical thinking.

It seems like a positive realization though. Does it grant you more freedom of expression when you’re not tied down by these discussions?

There was a moment when I thought that the two could exist together. But then as I got to know my own process, I realized that they actually don’t share a lot, the way my thinking develops and the way that the theoretical thinking develops. It’s important to understand they are coming from such different realms of thinking. I do think that my work is influenced by theory in some ways, but the feedback that I get from my own activity influences my work in such a different way. I assume that you don’t really get that kind of feedback when you are philosophically involved — though I am speculating of course, since I’m not coming from that area.

If there are no representational associations to the colors you choose, for example, how do you decide which ones to use?

The choice of color always has to do with what else is around it, colors look a certain way only in relation to something else. But there’s no hierarchy. I love purple, for example, but it’s not that everything is purple.The choice of color can enhance a space in such a multifaceted way. It can turn any direction at any moment. Color gets very close to you because it’s so enhanced, so artificially notched up. So it gets to you like noise would get to you or a scent would get to you, for example, or a taste. Color can really change a lot. Color is atopic.

“Color is the most magical surface changer. It doesn’t have the obligation to be in a certain space. Color can appear anywhere.”

If a lemon is painted blue, for instance, your whole experiences of lemons can change completely. I think color is the most magical surface changer. It doesn’t really have the obligation to be in a certain space. Color can appear anywhere.

Is that also why you started using a spray painting technique on walls and ceilings? To expand the space where color can appear?

One of them, yeah. The other one is that you move much faster, swifter in a space. Not only do you expand your reach, but you’re also incredibly fast. Also, the can holds so much color that I’m able to go on and on and on. Then, even when you encounter the sculptural obstacles of the surface, you can just go over them without stopping because you don’t directly touch the surface.

What is it like working in outdoor spaces? Obviously there are factors like weather or environment that will influence the work no matter what.

I think that control of your circumstances and spontaneity have nothing to do with one another. I think that my work is based on the fact that all these elements are on the same level: color, paint, time, people, myself, the tools, the wind… They are all part of the same experimental field. The things I’m clear about —the colors, tools, and situation—become the starting point. And I have an idea of where I want to go with it. Those things are very clearly controlled. But then the details—whether there is a drizzle more, a drop less, or the wind is a little stronger--I don’t believe in controlling that. That would not be interesting. 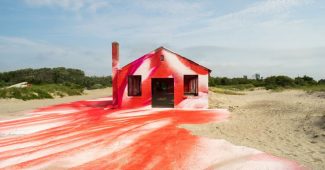 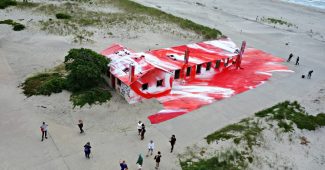 So you never know what those large scale projects like Rockaway!, where you spray painted a whole abandoned house on the beach, will look like in the end?

These are very big scale projects, as you said, and they always have different stages that they live through. Before I start on site, I paint on a small-scale model. I gather a lot of different possible points of view that later help me to make decisions in the large-scale. Like, if the wind in Fort Tilden, where Rockaway is located, is one day very, very strong, I would approach it in a different way. Or it might be that a color change is necessary or a red gets starker — or it might be that all of these things are changing at once!

Is trust also an important factor in that respect?

Right, it’s the same trust that you need to tell yourself that it’s going to be great. You stand there with 100 gallons of red paint and all these people are ready and everybody is thinking, “Oh my God.” You’ve worked on it, you wanted to do it, but you’re still thinking, “Couldn’t it go terribly wrong?” That’s really the only thing that you have to be very sure of: that nothing can go wrong. You can’t get in the way of the whole thing by messing it up with great ideas or smart moves. Absolute trust is, I think, the crucial ingredient.