Mr. Ramus, what concerns you about the architecture industry today?

Our profession has stagnated in how it deals with the advancement of both individuals and firms. Opportunity is rarely based on capability, but primarily on experience: “I’ve done so many hours, I’ve paid my dues and I’ve met certain qualification requirements.” And that’s more endemic of American practice than it is European practice.

So what was it like for you working at OMA in Rotterdam in your early days?

I benefited greatly from Rem Koolhaas’ commitment to ability over experience. Rem provided us with opportunities far beyond our years, opportunities that generated a whole diaspora of ex-OMA firms currently doing exceptional work. But in general, young architects today are met with limited prospects within the traditional practice model, and will likely still be considered young 30 years from now. Alternatively, you can find your own methods of practice; explore your capabilities. I’m not saying that it’s easy, but there are many recent examples of successful young architects who have established their own unique courses of practice.

“These experiences pushed me to grow at an unbelievable speed and depth. Mine is not a normal trajectory.”

Would you say that you’re one of them?

No, I can’t credit my position as the result of blazing a new path. I was very lucky. I joined OMA in the mid-1990s at an amazingly opportune time. We were very small as the firm was re-growing after a severe downturn. Yet the office had very high profile commissions due to Rem’s recognition as one of the most — if not the most — intellectually challenging architects of the modern era. He placed us in situations unwarranted by our experience, and gave us exceptional freedom.

Thom Mayne said he believes in giving people as much power as possible and then letting them find their breaking point.

Exactly, these experiences pushed me to grow at an unbelievable speed and depth. And they led to my opening OMA’s US office, to the US office establishing its own identity, and to it eventually evolving into REX. So, I do have to be cognizant that I was given unusual opportunities. Mine is not a normal trajectory.

But maybe these unusual opportunities are simply necessary these days — maybe we have reached a time where conventional methods are no longer cutting it.

I think that we’re definitely hitting a moment... For the last several centuries, intellectual inquiry developed into ever more specific silos. Over time, as disciplinary knowledge bases expanded, these silos broke into more and more discrete parts, advanced by more and more rarified explorations. There evolved a silo of quantum physics, a silo of applied mathematics, et cetera. But we are now at an extraordinary moment of “Entanglement,” in which the borders between silos are dissolving.

I think today the most profound ideas are generated by those operating at the boundaries between multiple silos, who can synthesize information and find connections at the intersection of traditional spheres of inquiry. Synthesis is now equally important to, if not more potent than, creation. We look for connections between ideas, whether new, existing, or forgotten.

So you feel that there are no more brand new ways of thinking about architecture?

I guess I’m saying that the “brand new” doesn’t interest me. I really appreciate the thesis of Johnston Marklee’s Chicago Architecture Biennial of “Make New History.” As I understand their premise, architectural discourse and architectural design are unduly and dangerously infatuated with “the new.” To our detriment, our profession is obsessed with creating designs the likes of which no one has ever before seen. But at REX, we couldn’t care less if an idea is new or old, fresh or stale… 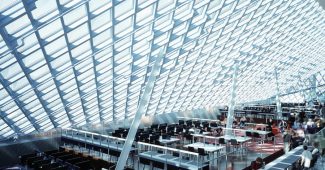 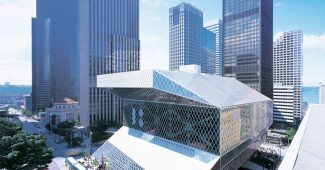 An old idea can still be a great idea.

Right, it only matters that it is powerful under the circumstances we are exploring. Just about every architect’s mission statement speaks to the importance of innovation, so architects start every project in a haze of panic, daunted by the challenge of designing a profoundly new structure. It’s sort of like saying, “This project has to be iconic.” Well, if you’re setting out to do something iconic, you’re not going to achieve it. If you set out to do something innovative, chances are you’re not being self-aware enough to be so. These types of artificial objectives are not what the design process is about at REX.

What is it about then?

It’s about being smart. We have intentionally kept the office at a controlled dimension, so that our core team can remain intimately involved in all our work. This helps us to keep a strong culture of criticality, engaged in the specifics of each project. We just went through this process at Brown University where we’re designing a new performing arts center: our core team met extensively with faculty, staff, students, and administrators over the course of an entire week to find out what they want from the building.

After all, it’s these people that will actually be using the space so their ideas are probably the most important.

Personally, I would never want to relinquish this kind of intimate engagement with the users of our designs. It’s just too rewarding. I have experienced this again and again, on projects like Seattle Central Library and The Perelman Performing Arts Center at the World Trade Center. I had a vested interest in the former because I was raised in Seattle, and in the latter because I have lived in New York for most of my adult life, and was here during 9/11. It’s why you would be an architect over many other things: the ability to change the lives of people that you have now a vested interest in. The greater the removal from them, the less rewarding, the less is at stake for you — and what a pity.