José, does the architecture industry take itself too seriously sometimes?

It absolutely does. I think architecture should be more like life — relaxed, fun, humorous. It's not just about philosophy. All us architects, we think that we are philosophers or something, but we are not; we are just builders. We are building for regular people who will use our buildings, who are going to live in them and move through them. That's how I think architecture should be. Nothing beyond that. Nothing more deep than that. It should be simple, for everyone to understand.

Was this something you’ve always felt strongly about or was it a gradual process of finding your voice?

I think we all have our own voice — I never specifically tried to find mine. Lucia Cano, my business partner and the co-founder of our architecture firm Selgascano, and I always felt very relaxed about that. At the same time, of course there are certain tools that we use differently than other architects, like the materials and the colors we choose, but we don't feel that is something related to us. We feel that it's something related to architecture in general — those are tools that you can use whenever you want, and with a lot of freedom. We don’t feel like we need to produce a brand.

“We never use color in the beginning of a project. There has to be a why, and that normally comes at the end.”

Wes Anderson also says that he doesn’t care about having a trademark, that his way of writing and staging scenes is simply his personality as a director.

Right, I think the difference is that in general architects aren’t relaxed about using those tools. For instance, there will always be a distinction when it comes to color because whatever you build needs to be painted. The color that we use the most is white because it provides the most light. And when we also employ orange or other bright colors — that will be the only one that you see!

Why do you think architects are afraid of color?

Well, typically, architects stay in more of a comfort zone. And of course, we don't choose whatever color: the choice takes a lot of experience, knowledge, and preparation. There's a lot of work in that, it's another layer in a project. In fact, we never use color in the beginning of a project. There has to be a why, and that normally comes at the end. We do a lot of renderings and test a lot of palettes of colors before deciding. There’s a lot of psychology in colors! 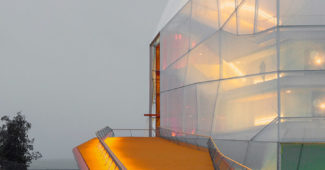 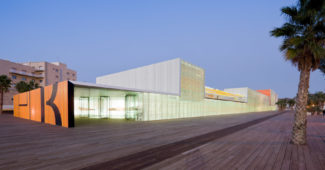 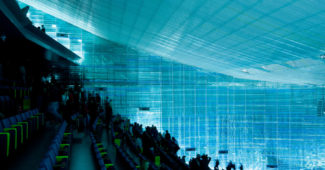 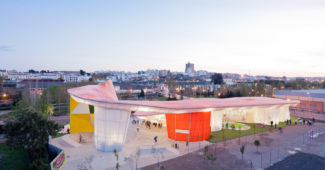 For example, your el B Auditorium in Cartagena makes use of shades of orange and yellow — these are apparently very calming colors.

There’s a few colors that we already tested and we know that are really good. Orange, for instance, is a fantastic color, especially for floors. For the floor, you cannot use white, black is complicated, but orange is in the middle; yellow as well. You can step on them. Black, for instance, is complicated to use in a building because it takes in a lot of heat. We once tried to do a very dark color on the floor and it was a disaster, it was full of dust everywhere! At SelgasCano, we always try to experiment a little bit, to do things in a new way somehow. We try to start from scratch in every project.

As you gain more and more experience, does it become difficult to start every project with a blank canvas?

That’s one of the most difficult things to do, especially as you are getting older and older. But it’s also something that can enrich you a lot. In the end, I think the experience that we have, we use it to stop the craziness in the sense that, “Okay, this is not going to happen because we need to build that and there isn’t a budget for that.” Our experience acts as kind of a barrier, a goalkeeper. Of course, we think that in some moments you need to do something special with fireworks and in other moments you need to be more discrete. It depends on the project. We have actually been criticized that our work has no consistency.

Yes, but for us it’s not really a problem to work with with different architectural languages, or even different materials like plastic and polycarbonate. And that can pose a problem because these days, you need to separate the use of plastics and its consumption, from the use of plastics in architecture. We are happy to use whatever material: we have used concrete, we have used a lot of steel, a lot of wood. But because using plastic is unusual, it attracts all the attention. For us, though, having the lightest building possible is related entirely to less energy, and the difference in the energy needed to produce plastic versus glass is immense. That doesn't mean that it's going to be a material that doesn’t last.

“I think society influences architecture, not the other way around.”

Even though plastic is generally instantly associated with consumerism and a throw-away society?

A good example of this is the iconic Frei Otto swimming pool and Olympic Stadium in Munich built in 1972. The whole cover of the stadium is acrylic, which, over time, started turning a bit yellow. We actually visited the stadium in the nineties and for me the yellow was like a stone with a bit of patina. There was nothing wrong with the material! It recorded the passing of time, but that didn’t mean it had to be replaced. But when I went back in the 2000s, they had replaced the whole roof! There was nothing wrong with the plastic, but they wanted something perfect and clear and transparent — something brand new.

In a way, these materials are so novel that we simply don’t know how to deal with their aging.

Right, and ultimately, I think society influences architecture, not the other way around. Architecture is very slow process, and a very complicated one. In a way, it’s always running behind art or other parts of culture that are moving much faster, and which are really regulating the future. They are regulating what is coming or what is going to happen in general. Meanwhile, we are simply happy to build the lightest buildings possible.