From 9 October 2020, the Helmut Newton Foundation in Berlin will present its new exhibition America 1970s/80s with works by Joel Meyerowitz, Evelyn Hofer, Sheila Metzner, and Helmut Newton.
Emerging Masters
Rolex is proud to support The Talks’ new interview series about the cultural leaders of the future.

Mr. Meyerowitz, your photography career has seen you excel in many different styles: street photography, wide format, portraiture, and even still life. How do you explain these transitions?

I tend to think that the inner workings of the artist, and the arc of photographic experience, are molecular: they're inside you. And as you work this medium, this new experience you're trying to open up, you begin to see little tributaries along the line. So, you make a kind of tangent off to that side, and the tangent may bring you back to the main body of work or it may be the next developmental thing. And sometimes this development is within the medium of photography itself.

Photography itself has also evolved so much over time, and that must have influenced your work, too.

Right, photography went from paper negatives to salt prints to albumen prints to wet plates to dry plates to roll film — I mean, for 180 years, photography has been upping the ante and reinventing itself technically! For instance, I remember when digital photography came in, and in 1999, some camera company gave me a prototype. It made a one-and-a-half megabyte file, so you can imagine the print. But as soon as I made the picture, I trusted it will get better. So in a way, you have to accept some transformations of the medium itself, and that will alter one's behaviour and one’s subject matter and how you print and what you ask for photography. If you are open to the surprises of your own mind and the medium that you're working in, you can evolve in unexpected ways.

“You have to let go of something. And usually it’s the thing that you’re doing well at that moment. It’s a courageous step into the unknown.”

Is that what you meant when you rather famously advised that “anything you have done well is worth letting go of”?

Well, like a game, you get better and better at being in the right place at the right time, and at making the pictures that are coming out of your consciousness. You begin to perform at this level that’s very appealing and satisfying. But I think there comes a time for everybody, where there's a choice: Do you want to continue on this plane, or have you been sustained enough by it to risk asking the question of, “What else is there for me to see and discover in photography?” In order for you to answer it, you have to let go of something. And usually it’s the thing that you're doing well at that moment. It's a courageous step into the unknown, but really, you are well prepared, with everything that you've learned. All of the layers of learning over the years are there, built into your larger response to the world. So it's your duty to yourself, to say, “Okay, I'm going to take a risk and see if I can push the medium and my behaviour out beyond the safety zone.”

Was that what persuaded you to always take risks and try new approaches to photography?

I have been lucky enough in my lifetime to begin with color photography in 1962, and then to discover black and white photography. On the street I’d always work with two cameras, so that I could understand the difference between color and black and white. But later on I felt this change, which asked me to move to a larger format camera because I wanted the descriptive power that an 8:10 camera could bring to the depth and space and color and light of a photograph. That’s when I went to Provincetown because it was a place that, although it was by the seaside, it also had street life, reminiscent of 8th Street in Greenwich Village in New York. And I thought, “I can then practice photographing on the street, but also photograph in the new environment of Provincetown.”

And Provincetown had a very significant cultural atmosphere in the seventies and eighties.

Provincetown has historically been a home for artists, playwrights, poets, writers — all those people who wanted to get away from it all, who felt that they needed to be as far away from civilization as possible — and fishermen. And the Outer Cape, as it's known, was a place for these people to retreat to and to feel like they would be welcomed, understood, tolerated. In the sixties and seventies, the first gay people started coming there, lesbians, then transvestites, cross-dressers, and transgender. It was slow at the beginning, but there was definitely this new movement. Particularly during the AIDS crisis, Provincetown became one of the centers where people could come and get away. This was the time I was there, and I began to see the new change that was filtering through the town. And my instinct was to record this without dramatizing it in any way.

This was also around the time that you changed your approach to street photography, actually having a personal interaction with them rather than taking their photo anonymously. How was that experience for you?

Well, shooting on the street is a slippery practice, one learns to be invisible, to try to be present and in the right place at the right time, before people get a sense of your being there to photograph them. And I really developed this kind of invisibility for many years. But then I found myself walking around with this wide-lens wooden camera, which stood a meter and a half tall on a tripod: suddenly, people saw me, and my cloak of invisibility was gone. People began ask me, “What are you doing with this big wooden camera?” But my instinct and impulses as a street photographer prepared me to respond immediately to someone that I saw that interested me — I wouldn't even hesitate to go right over and do my spiel, so that I could make the photograph. The speed of my commitment, my knowing that something was absolutely right, and necessary for me, was what I had learned.

Did you also have to “unlearn” certain processes or instincts due to your background in other photographic styles?

I suppose what I had to unlearn, or learn, however you want to think of it, was a degree of patience: that I couldn't just make the picture at the same moment that I saw it as I had done previously. I would have to construct the relationship between me and the person I was photographing so that there was a sense of trust. Because if the person you're speaking to doesn't trust you, just screw it, they're not going to give you that mystery. They're going to pose, give you the best angle, do a little charm offensive. I didn't want that, I wanted the naked truth.

Were you ever surprised by the character revealed in the photograph, compared to your first impression of them?

Very often! First impressions give you just first impressions, you think, “Oh, this is an interesting person, they have red hair, it's glinting in the sunlight, all those curls.” And then when they agree to do it, and I'm setting the picture up, we're speaking to each other, and when I learned something about the person — it's like a whole other image is there! And I would try to connect to that quality of their personality. Besides the red hair, or the scar, or the tattoo, or piercing, or whatever, I would try to enter into some dance with them. 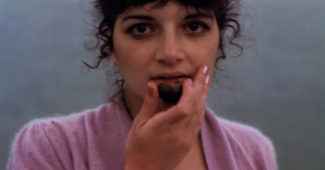 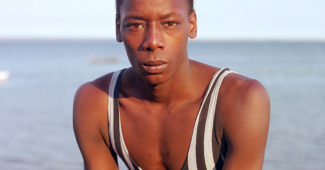 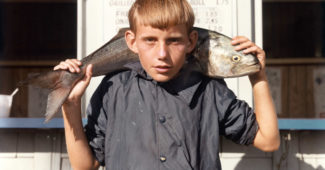 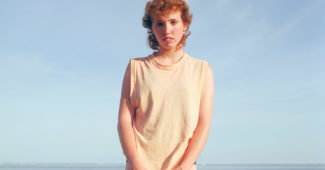 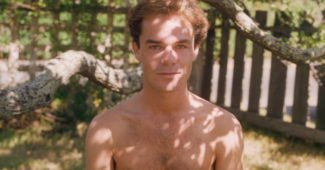 Can you remember a specific moment that has stayed with you?

Well, for instance I remember photographing a woman named Sam, who was a really a tough lesbian fisherman in Provincetown. She had a patch over her eye that she had lost out fishing. And yet, when she was standing in front of me, a sudden shyness came over. She was holding her knife in her hand, and was opening and closing the knife, opening, closing — like a nervous gesture. And at some point, she had the knife open, slightly digging it into her thumb. I thought, “Oh my God, her nerves are showing up,” and I just flipped the camera around onto a vertical, and said, “Sam, just stay exactly as you are, don't move.” And there she is, tough Sam looking into the camera, with a patch, and down below is this knife pressing into her flesh. It's a little note that makes the picture more than just the face and the outfit and the expression: it shows something of who that human being is.

Absolutely. Without doubt. You look at August Sander, Diane Arbus, Richard Avedon, Irving Penn… These are people who understand human nature. They've had interactions so many times that they're quick to recognise the vulnerabilities, the tenderness, the hardness, the educational background, the professional demeanor. All of these things are fluid and in play in front of any artist who is making a portrait. And the quick take that we do in situations like this allows us to expand the moment that we are with the subject, so that we may lengthen it, we may deepen it.

Have you always been a good people reader yourself?

I've always been a street person, from childhood on! I grew up in a really mixed cultural area of the Bronx, where it was mostly immigrants; Italians, Irish, Germans, Jews, and later, Puerto Ricans and blacks. And this human mix teaches you to be observant and lively and questioning and enjoying the social dynamic that happens. So I think it happened naturally. At the same time, my father was a real street guy, he was the mayor of the block. So he was a kind of guide to me, he taught me that you could have a good time watching the world. And I have been really fortunate to be able to be out in the world for the last 60 years, walking around with a camera in my hand and saying, “Look at that color. Look at that action. Look at that sky. Look at this place.” It's been an incredible gift.

Emerging Masters
Rolex is proud to support The Talks’ new interview series about the cultural leaders of the future.
From 9 October 2020, the Helmut Newton Foundation in Berlin will present its new exhibition America 1970s/80s with works by Joel Meyerowitz, Evelyn Hofer, Sheila Metzner, and Helmut Newton.
Life